It’s Joe Biden’s mess and, apparently, President Obama thinks the vice president is obligated to try and clean it up. The administration knows that Biden’s record is an impediment to its campaign to discredit the refusal of Senate Republicans to acquiesce to the president’s effort to ensure a liberal majority on the Supreme Court before his term ends. Under similar circumstances in 1992 — a president in the last year of his term and a Senate controlled by the other party — Biden stood up on the Senate floor and declared that Democrats would not even consider anyone nominated to the Supreme Court until after the presidential election was held. But now that the shoe is on the other foot and his party wants to secure the court before the people have their say in November, Biden is stuck explaining a speech that has made the GOP grateful for the wonders of the C-SPAN video archive.

Biden has been forced to eat his words for breakfast, lunch, and dinner every day since the death of Justice Antonin Scalia gave the president an opportunity to tip the court to the left. More than Senator Chuck Schumer, who made a similar declaration about stopping any appointments from George W. Bush in the last 18 months of his term in office, Biden’s speech is the definitive argument against conducting a nasty and ideological battle over a Supreme Court nomination in the middle of a presidential election. So in order to put an end to the Republicans throwing the “Biden rule” in the face of Democratic opponents, Biden trooped to Georgetown University Law School to give a speech to put the whole thing to rest. Did he succeed? Not even close.

I won’t waste much time on Biden’s efforts to talk himself out of this predicament, and neither should anyone else. That inconvenient C-SPAN tape is still there refuting his efforts to say he didn’t say what he said in 1992, or that he didn’t mean it. Biden’s claim is that what he wanted was for the first President Bush to consult with the Democratic Senate majority before appointing another justice. But, like Schumer’s warning to the second Bush, Biden’s intent was clear. The Democrats wouldn’t go along with a Republican president getting another shot at changing the court with only months to go before an election could put a Democrat in the White House. Since replacing Scalia with a lifelong liberal Democrat like Garland would transform the court, Republicans feel the same way about Obama.

As observers who are able to put aside their partisan or ideological loyalties aside for a moment must admit, neither side is arguing from the moral high ground. Where you stand on this issue depends on where you sit and both Republicans and Democrats would be saying the opposite things today, as they did in 2007, if control of the White House and the Senate was reversed. So in order to prevail in this argument and to cajole weak-willed Republicans who worry about a backlash from the voters, to cave in, Democrats can’t just say they should get their way because they want the court to have a liberal majority. They must instead, spout high-flown arguments about democracy and the Constitution to demonstrate why they should get their way. And it is that portion of Biden’s oration that deserves at least some cursory attention.

According to the vice president, the Constitution obligates the Senate to hold hearings and a vote on anyone nominated by the president. That sounds reasonable and if there were even a remote chance that such a nominee could be confirmed then there would be no argument against doing that. But you don’t have to have a law degree from Georgetown, Delaware (as Biden has) or from Yale and Harvard (as all of the sitting members of the court and Judge Garland have), to understand that Biden is making up the part about hearings and a vote being a positive obligation of the Senate.

Such a rule is like a lot of the things that liberals have found in the margins or the spaces between the lines of the Constitution in order to invent rights that would have astonished the Founders. It doesn’t exist. The Constitution merely says that court nominees require the “advise and consent” of the Senate. If the majority of the Senate doesn’t want to confirm a nominee, and it may do so for any reason whether substantial or arbitrary, it doesn’t have to hold hearings or a vote. It may say no in any manner it likes. And if that means no hearings or a vote, so be it.

Given the stakes involved and the fact that in a few months the voters can determine which party controls the executive, legislative and judicial branches, deferring a choice until after November seems prudent. That may strike Democrats as unfair but it isn’t any different from what Biden said in 1992.

In a world where Senate deliberations about the worthiness of nominees to the Supreme Court focused solely on their legal acumen and ethics, such a delay would be unthinkable. But we don’t live in such a world and one of the principle architects of the politicization of the current confirmation process is none other than Joe Biden. He is right to point out that he presided over eight SCOTUS nominations during his time as Judiciary Committee chair and that all got hearings and up and down votes. But it was Biden along with his friend Ted Kennedy that changed the process from a dignified inquiry into a judge’s resume into a politicized circus when they turned Robert Bork’s name into a verb after President Reagan nominated him to the court. Biden and the liberal Democrats broke the court then and they can’t pretend that we can go back to the past now just because it would be to their advantage. If you don’t believe me, then listen to what President Obama said in 2006 when he filibustered Justice Alito’s nomination even though he was ready to concede that the judge was both qualified and had no ethical issues.

Nor is there any more credibility to Biden’s claim that a Republican refusal to consider Garland is an offense to democracy or the future of the court. The Constitution doesn’t specify a number for the composition of the court and while an odd number of justices will produce fewer ties, it can function quite nicely until next year when a new president and Senate can try again.

More importantly, Biden’s appeal to bipartisanship is not just hypocritical. In this case, it also distorts the intent of the Founders. The system they created was intended to create checks and balances that would thwart the efforts of an executive branch to force its will on the entire government. Gridlock may be frustrating but it is the natural consequence of divided government, which is exactly what the voters asked for when they elected a Democrat to the White House in 2012 and put Republicans in charge of the Senate in 2014. Under the new rules that Biden helped create when he politicized the confirmation process 29 years ago, that means the only way to confirm a judge to a swing seat like the one that Scalia occupied is to wait for the voters to have their say again. Far from undermining democracy, Republicans, in this case, are actually supporting it.

Of course, such a stance may not work out the GOP’s advantage if Donald Trump leads them to disaster in November and next January a President Hillary Clinton is able to send a liberal nominee to a Senate controlled by the Democrats. But since despite the disingenuous effort to sell Garland as a moderate, he would tip the court to the left anyway and Republicans can’t concede the election in advance, they have no choice but to stand their ground.

But no matter how this turns out, we need no more lectures from Biden about democracy, the Constitution or how to pick Supreme Court justices. He’s already done enough damage. If President Obama wants to persuade any wavering Republicans to bend to his will, he’d be well advised to tell Biden to give us all a break and just stop talking. 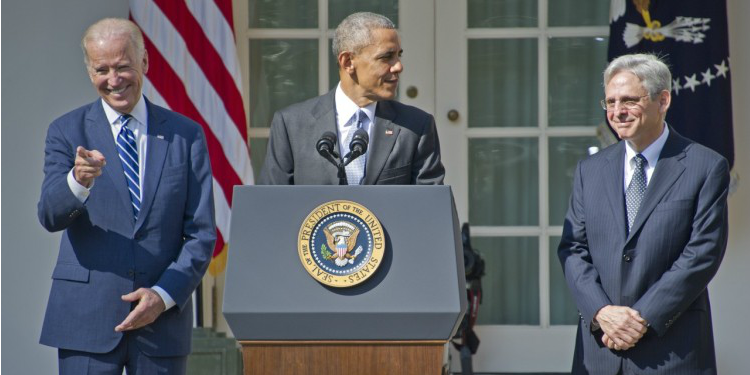