As regular readers of this space know, I took a break from daily writing for COMMENTARY in the days after the presidential election. The cause was a long-planned tour in which I would debate the U.S.-Israel alliance and the Middle East peace process with the Forward’s J.J. Goldberg. In the two weeks between the election and Thanksgiving, Goldberg and I spoke at 14 different Jewish venues throughout the United States (including events in Texas, California, Wisconsin, Illinois, South Carolina and Florida) as well as one in Canada. But though we did delve into Israeli politics and questions concerning the relationship between the Diaspora and the Jewish state, one unanticipated topic turned out to be the most important one for most of our audience: Donald Trump’s victory. So what I thought would primarily be an opportunity to gauge Jewish support for Israel also turned out to be a journey through a land of liberal despair.

Wherever we went, I heard the same themes that have been sounded in the national press since November 8th.  That is to say, Trump’s election was depicted as the end of civilization as we know it. I was prepared for some angst about Trump from a population that had overwhelmingly backed Hillary Clinton. Moreover, since I had strongly criticized Trump and questioned both his and Clinton’s fitness for the presidency, I see nothing out of the ordinary for the plurality that backed the Democrat to be upset about the outcome. But when I heard one rabbi at one of our first stops publicly refer to the election as morally equivalent to the 9/11 attacks, I knew that what was going on was not garden variety post-election blues. Most of the people I met weren’t so much interested in speculation about Trump’s policy options or which, if any, of his campaign promises he would keep as they were in seeking reassurance that we are not living through a repeat of the last days of Weimar Germany.

One needn’t have voted for Trump to understand that the Weimar analogies and talk of 9/11 trauma are beyond absurd hyperbole. Trump’s personal faults and problematic positions notwithstanding, he is not plotting to void the Constitution any more than he is a closet Nazi. The alt-right that was encouraged by some of his dog whistles were exploited by Trump, but, Steve Bannon’s presence in the West Wing notwithstanding, there is little or no proof that they will be calling the shots in a Trump administration dominated by mainstream Republicans. This kind of loose talk about Germany is not merely evidence of the growing disconnect between liberals and the approximately 47 percent of the country that voted for Trump. It is also proof that the trend toward a bifurcated society has now reached a level that ought to be alarming to both Democrats and Republicans.

It is axiomatic that we’ve become a country divided between those who watch Fox News and those who listen to NPR, and never the twain shall meet. That divide has grown worse with the advent of social media as Americans are now getting most of their news (whether legitimate or “fake”) from a medium in which they can insulate themselves from opposing views by blocking any opinion or source that might force them to question their assumptions and prejudices.

That doesn’t mean liberals are unaware of Trump’s positions or that conservatives were ignorant of what Clinton advocated. Rather, it means that large portions of the electorate were simply unacquainted with the motivations of people who disagreed with them and could easily dismiss them as either leftist pawns or racists.

If that was the case for most Americans, it is doubly true for a community that remains overwhelmingly liberal and in which conservative viewpoints are either outliers or simply missing. The despair of many of the liberal Jews I met throughout the country was rooted as much in their belief that other Americans had betrayed the nation’s ideals as it was in dismay about Trump. To them, the notion that more than 60 million voters had taken a look at the two major candidates and decided that Trump was the lesser of two evils rather than a representation of pure evil himself was unimaginable absent malice or hate. The divide is as much cultural as it is political.

It is unsurprising that a Jewish community that conducts the debate about Israel in distorted terms should be laboring under the delusion that approximately half of the country is plotting their demise. Ignorance about the realities of the Middle East and Israel is widespread in much of the American Jewish world; so too is ignorance of working-class voters as well as mainstream Republicans who thought a figurative third term for Barack Obama was a bad idea.  If you think Netanyahu is an extremist and someone who rejects peace rather than a leader who represents a broad consensus of Israeli opinion— as many Jews who get all of their Middle East news from biased mainstream media outlets do — your views about the U.S.-Israel relationship will be similarly distorted.

If there is anything I learned on my voyage through a land of liberal despair, it is that what this country and the Jews need is more informed debate in which we will be compelled to measure our arguments against those of our opponents. A country in which we knew our neighbors better would be one in which the slur about 9/11 would be unimaginable outside the political fever swamps. As the political temperature of the nation continues to simmer, the imperative must be less demonizing and more listening. 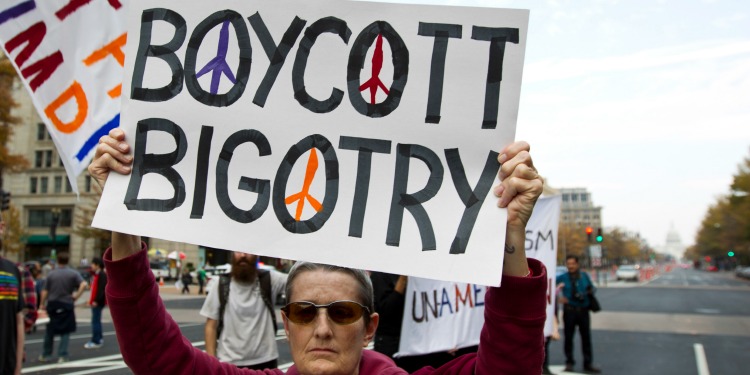