In recent weeks, the conflict over the Temple Mount in Jerusalem has heated up. Palestinians have grown increasingly violent in their effort to prevent Jews from entering the site of the two Biblical Temples that constitutes the holiest spot in Judaism. Though the state of Israel has left in place rules that prevent Jews from praying there, the Arab states and the United Nations regard the desire of Jews to visit the compound as an insult to Islam. Palestinian Authority leader Mahmoud Abbas has called upon his people to resist the efforts of Israelis to “desecrate” holy places with “their stinking Jewish feet.” This effort to whip up Arab hate against the Jews, is a cynical act that has several precedents in Palestinian history that inevitably led to the shedding of Jewish blood. But while Israeli efforts to stop the uptick in terror in Jerusalem are being met with unfair criticism, the truth about the struggle over the sacred plateau is best illustrated by the news of a startling archeological discovery.

Researchers sifting through rubble from the Temple Mount that was dumped outside the walls by Muslim authorities have found an ancient stone seal that dates to the 10th and 11th centuries before the Common Era. That is the period of the reigns of the biblical Kings David and Solomon when the first temple was built on the site. While the find will, as is inevitable, will provoke the usual fierce debate among scholars over any such discovery, it nonetheless provides an important context to the political struggle over the Temple Mount and Jerusalem.

The reason why some will question the significance of the seal is that it was found among the 40 tons of dirt excavated by heavy machinery from the ground of the Temple Mount in the 1990s. That excavation was ordered by the Muslim Wakf that Israel has allowed to administer the site and its mosques since Jerusalem’s reunification in 1967 and was the result of a mosque building project. Though this is one of the key historic sites in the world, the Wakf had no interest in preserving the vast treasure trove of artifacts that are contained in the 35-acre Temple Mount compound. Indeed, judging by the brutality of its methods and its decision to simply dump the contents of their excavation in the Kidron Valley outside the walled city, it appears the Wakf was as interested in trashing any possible evidence of the history of this place as they were in improving their facilities.

The Israeli government, then as now run by the supposedly hard line right-winger Benjamin Netanyahu, was so interested in keeping the peace that it made no effort to stop what must be considered the greatest act of archeological vandalism in history. Indeed, the Wakf’s actions must rank with the efforts of the Taliban and ISIS to destroy the vestiges of pre-Islamic cultures in areas under their control. But while the Taliban and ISIS merely wish to erase evidence of pre-Muslim religions in the region, the Wakf, supported by the Palestinian Authority, had a more specific agenda: denying Jewish history.

The whole point of the dispute about the Temple Mount isn’t really about protecting Muslim holy places that are in no danger from Israeli interference. To the contrary, the goal of Palestinian activists who operate on the Temple Mount is to exclude Jews from the area just as they were excluded from all of the Old City of Jerusalem including the Western Wall before Israel took control of it in June 1967.

Though malice is part of this effort, it is rooted in a more concrete aim. Abbas and his Palestinian Authority and its official media routinely deny that Jerusalem has a Jewish history. They treat all evidence of the indelible historic ties between the Jews and their ancient capital as Zionist propaganda. Rather than seek to cooperate to ensure that all faiths have equal access and rights to the holy sites in Jerusalem — something that has only become possible under Israeli sovereignty — the Palestinians treat the Jews as interlopers in even those places most closely associated with Jewish history.

In this context the battle over archeology isn’t merely a scholarly debate but a vital part of the effort to deny the legitimacy of a Jewish state no matter where its borders would be drawn. By trashing an area that was loaded with precious artifacts buried over 30 centuries, the Palestinians hope to convince the world that Jews have no claim to Jerusalem, let alone any part of Israel, including the areas inside the 1967 lines.

The significance of the seal is that it shows the level of activity that is consistent with it serving as the site of the capital of ancient Israel. Since denying the existence of David’s Kingdom might hurt the case for Zionism’s legitimacy, destroying evidence of that history is key to their agenda. That’s why they trashed the Temple Mount and also why the volunteers of the Temple Mount Sifting Project that is painstakingly going through the material they removed from the historical site is so important.

As with the startling archeological work at the City of David site just outside the current Old City walls that has been supported by New York philanthropists Daniel Mintz and Meredith Berkman, the stone seal refutes the deniers of Jewish history. Try as they might to call the Old City “traditionally Palestinian” or “Arab East Jerusalem,” all you need to do to confirm Jerusalem’s Jewish roots is to start digging.

The only just solution to the problem of the Temple Mount is to preserve the mosques and the right of Muslims to pray there (which is not in question) while also protecting the right of Jews to visit their sacred place. While Israel is falsely accused of undermining the fragile peace of Jerusalem by the United Nations, the only ones who are guilty of fomenting violence are those Palestinians that are engaged in an effort to deny Jewish history and Jewish rights. 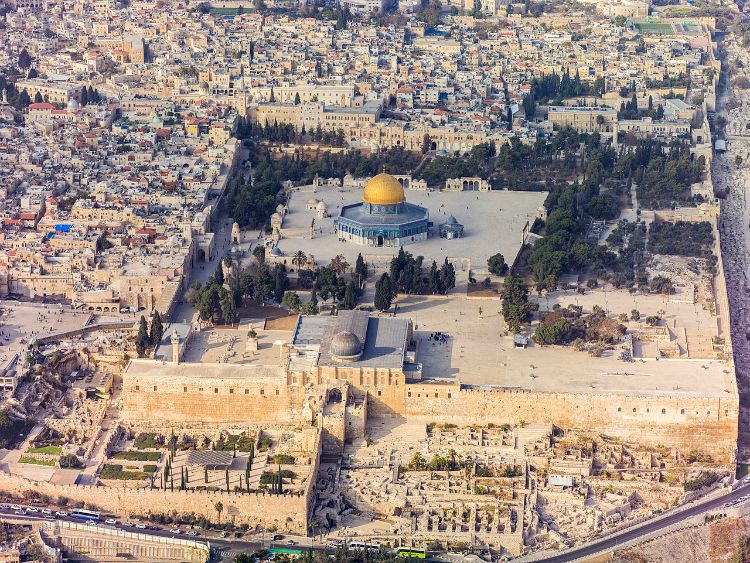