Yesterday, President Obama went to a ceremony at the Israeli Embassy in Washington honoring Americans that were given the “Righteous Among the Nations” award. The honor, given by Yad Vashem, Israel’s Holocaust memorial and museum, was given posthumously to Master Sergeant Roddie Edmonds, for his courageous defense of fellow U.S. prisoners of war that were Jewish against threats from their German captors. In a remark that should be remembered to his honor and that of the U.S. Army, for all time, Edmonds told the Germans, “We are all Jews here.” Edmonds defiance caused the Nazis to back down, and the Jews among the POWs were not taken away for death.

In his eloquent remarks at the ceremony, President Obama echoed Edmonds words and reaffirmed America’s commitment to the security of Israel.

Anti-Semitism is a distillation, an expression of an evil that runs through so much of human history, and if we do not answer that, we do not answer any other form of evil.  When any Jew anywhere is targeted just for being Jewish, we all have to respond as Roddie Edmonds did — “We are all Jews.” …

As President, I’ve made sure that the United States is leading the global fight against anti-Semitism.  And it’s why, with Israel and countries around the world, we organized the first United Nations General Assembly meeting on anti-Semitism.  It’s why we’ve urged other nations to dedicate a special envoy to this threat, as we have. …

It’s why, when voices around the world veer from criticism of a particular Israeli policy to an unjust denial of Israel’s right to exist, when Israel faces terrorism, we stand up forcefully and proudly in defense of our ally, in defense of our friend, in defense of the Jewish State of Israel.  America’s commitment to Israel’s security remains, now and forever, unshakeable.  And I’ve said this before — it would be a fundamental moral failing if America broke that bond.

It is to the president’s great credit that he spoke these words and, it is probably not insignificant that he chose to deliver them at the embassy. That is something that prompted most reports of the event to view it as an attempt to better relations with Israel after seven years of the president prioritizing the creation of more “daylight” between the two allies.

But while we should applaud this speech, it bears asking if, indeed, there is “daylight” between the president’s rhetoric and reality. The answer to that question is not as simple as either the president’s supporters or his critics would like to believe.

In his defense, we should say at the outset that even by paying lip service to the connection between the lessons of the Holocaust and the contemporary threats to Israel and the rising tide of anti-Semitism around the globe, the president was saying something many world leaders failed to note in their remarks on International Holocaust Memorial day. For example, Canada’s new Prime Minister Justin Trudeau didn’t even mention the word “Jews” in his statement, let alone, Israel. Elsewhere, recognition that the state of Israel is the only real, living memorial to the Holocaust was similarly lacking.

It must also be said that President Obama has continued the security alliance between the U.S. and Israel and has, as a general rule, also maintained existing American policies about not abandoning the Jewish state at the United Nations.

But even as we acknowledge these important facts, it is important to understand that the context of “We are all Jews” requires more than statements or even the deeds for which the president can take credit. At a time or rising anti-Semitism in Europe and a terrorist offensive against Israel, it must be asked whether U.S. actions are as good as Obama’s fine words.

The answer is not entirely.

It is all well and good for the president to state that he opposes terrorism against Israel. But why does he fail to condemn those that foment hate against Jews and encourage and even honor terrorists that seek to shed Jewish blood. The continued unwillingness of the administration to hold the Palestinian Authority and its leader Mahmoud Abbas for his support for the random slaughter of Jews in the “stabbing intifada” or his role in starting the violence with false accusations intended to initiate a holy war, is shameful. The willingness of the administration to pose a false moral equivalence between isolated Jewish violence and a mass campaign of terror Palestinians is symptomatic of the problem as is its hypocritical attack on a proposed Israeli law that would require transparency for groups support by foreign governments that undermine Zionism.

Nor was the U.S. prepared to speak up to criticize UN Secretary General Ban Ki-moon when he said that it was “human nature” that led Palestinians to strike out at Jews and to ignore their rejection of peace.

It should also be remembered that when Israel was actually forced to use the military hardware it gets from the U.S. to defend itself against Palestinian terror attacks from Gaza, the administration not only unfairly criticized those actions but actually halted the flow of munitions to the Jewish state that were needed to resupply its military.

Lastly, and most important, the Obama administration has played a pivotal role in ending the isolation of an Iranian regime that constitutes a mortal threat to Israel. The deal that the president thinks is his signature foreign policy achievement did not, as he promised to do in 2012, end Iran’s nuclear program, but, instead, granted it legitimacy and ensured that Tehran will be able to get a weapon that could threaten Israel’s existence and another Holocaust after it expires in ten years. He rewarded Iran with a vast cash windfall and opened up an international business gold rush that will guarantee that sanctions can never be re-imposed no matter whether it violates the deal or other international rules. Nor did the president seek to make Iran give up its support for terrorism or its calls for Israel’s destruction and Holocaust denial (reaffirmed only this week by the country’s Supreme Leader). The missiles aimed at Israel by Hezbollah and Hamas and the terror tunnels that threaten its borders are and will continue to be subsidized by the money that Obama has paid Iran.

A world in which those that kill Jews with impunity or plot their destruction are rewarded by the U.S., as the PA and Iran have been, is not one in which the lesson taught by Master Sgt. Edmonds has truly been absorbed. Nor should we forget that the “daylight” between Israel and the U.S. the president believes in has only encouraged the terrorists rather than brought about peace. His support for the UN, which continues to be a cesspool of anti-Semitism, also gives the lie to his commitment to fight Jew-hatred. As much as we should be glad that the president said what he did yesterday, the gap between rhetoric and reality is still tragically stark. Preventing the shedding of Jewish blood requires more than speeches. Unless words are translated into action, they are meaningless. 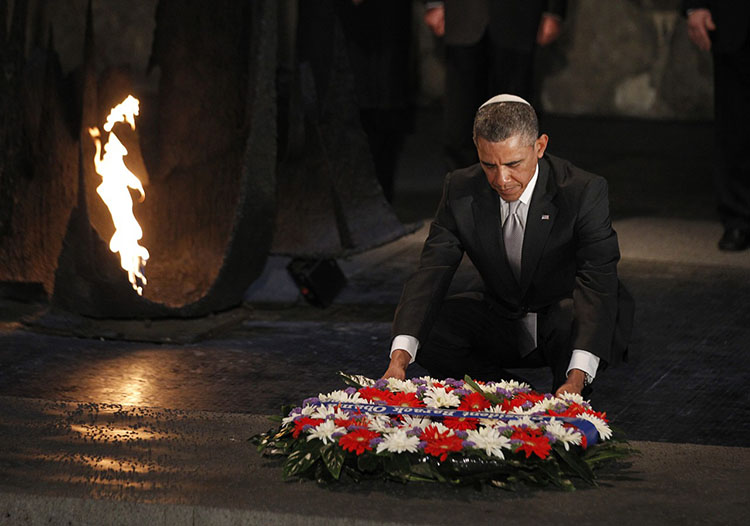