I don’t think Donald Trump intended to stage a scene that would be construed as a rerun of Nazi Germany when he asked a crowd in Orlando, Florida to raise their hands and pledge to vote for him. As my friend and former colleague Bethany Mandel noted in the Forward, Barack Obama also made a similar request of people attending a rally for him in 2012. But it didn’t look as bad since Obama asked those pledging fealty to him to put their hands over their hearts. Thus, he was spared having a photo of followers raising their arms at an angle that, to some, looked suspiciously like Germans giving the Nazi salute to Adolf Hitler.

Trump’s fans are right to say there is no comparison between what happened in Orlando and Germany. So comments like those of the New York Times’ David Brooks who likened it to the infamous Nuremberg rallies on “Meet the Press,” are cheap shots and can only further embitter and alienate Trump’s backers. Trump has been caught dog-whistling to the many bigots and racists who like the xenophobic and nationalist tone to his rhetoric. He’s also been guilty of making inflammatory and prejudicial statements about Mexicans and Muslims when not insulting just about every other group and all of his political competitors. He has dragged American discourse down to its lowest level in history. But he is not a Nazi.

The avalanche of side-by-side photos of Trump backers and those giving the “Sieg, heil!” salute on Twitter aren’t doing any more to spread light on the situation than anything coming out of the current GOP frontrunner’s mouth.

Let’s be clear that as much as Trump and some of his followers have behaved very badly, if there is anything we should understand by now it is that Holocaust analogies are almost always wrongheaded. The only thing that can be compared to Hitler and the Nazis are other movements bent on mass murder. And for all of his numerous faults, that is not something on Trump’s agenda. The reality of Trump is bad enough without anyone having to jump the shark by calling him Hitler.

But what is fair is to compare Trump to Obama.

That is the last thing Trump’s legion of fans wants to hear. They regard Trump as the antidote to everything about the current administration as he promises to restore America’s greatness and to “win” again by some magic formula involving his bargaining skills and strength of will. His vulgar chest-thumping about bullying the rest of the world the way he has the GOP presidential field seems, in the eyes of both Trump’s admirers and the president’s adherents, to be the polar opposite of Obama. But that is not so. Their styles may be different but the two are more similar than you might think.

Both Obama and Trump have risen via movements that are little more than cults of personality. Both have inspired absurd hero worship that focused less on their ideology than on their personal qualities. Obama ran on national unity and governed as the most partisan liberal ideologue since Lyndon Johnson. Since Trump has no set principles there is no way of knowing what he will do which is why many conservatives correctly view the prospect of a Trump presidency as not likely to be any different from one run by the Clintons.

Part of the attraction of Trump is the notion that the nation needs a strong man. He appeals to the authoritarian instinct in ways that no other politician has done in the living memory of any American. It is not surprising that his followers are ready to pledge allegiance to him in the way that Obama’s have done. If it’s hard to think of any other presidential candidate other than this pair doing this, that’s not an accident.

The entire premise of the Obama presidency has been a belief that the magic of his personality would transform both American politics and international relations. That it has been a resounding failure on both fronts is hardly surprising since his considerable political talent is not matched by any gift for governing or command of the realities of foreign policy.

But though Trump substitutes machismo for Obama’s apologies, is he really any different? Like Obama, he, too, thinks all it takes to transform the country and the world is to put one bigger than life person in the Oval Office. Leaders are vitally necessary. But the American republic is one that is rooted in a set of Constitutional principles that place the law above the will of any one man and his acolytes.

President Obama has chafed against this bedrock concept of checks and balances throughout his time in office. He believes that his desire to change a law, be it those concerning immigration or the environment or even a nuclear treaty with a hostile and dangerous Islamist state, is more important than the process the Constitution set up to enact such procedures. Yet can anyone doubt that Trump, a man who thinks the military won’t dare to disobey illegal orders if they come from his mouth, would do the same or even far worse?

Given the way he flirts with and sometimes engages in prejudice, it’s not surprising that a photo that depicts his followers with arms raised pledging blind allegiance to him would provoke unflattering comparisons. But the real analogy here is with the man Trump wishes to succeed. Is there much difference between Obama’s belief that he could turn back the oceans and Trump’s promise to make Mexico pay for a wall? Both involve crippling economic damage to the country (getting rid of fossil fuels is fashionable and is poison to the economy in much the same way as the trade war that Trump thinks will pay for his great wall). But more than that, both pledges are the product of hubris.

There are vast differences between Obama and Trump. Obama’s smoother edges made it more difficult at times to discern his monarchical instincts as head of the executive branch. Obama’s historic status as our first African-American president was also the impetus for his election and re-election and will probably be the sole reason he is remembered by history. But his “hope and change” mantra is just a liberal version of Trump’s “make America great again.” Both are empty slogans that are merely the justification for faith in one deeply flawed man.

Those who seek to replace Obama with Trump may think they are doing something radically different. But the sad truth is that they are merely heading down the same dead end that Obama’s followers pursued as they placed their face in another would-be great man. 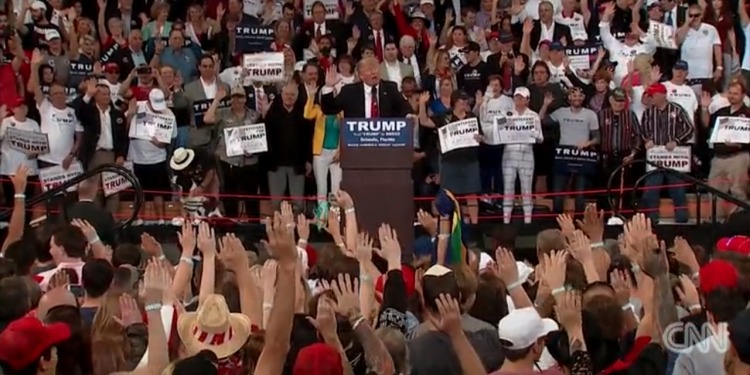