Can there be anything more ludicrous than a movement that is dedicated to isolating the state of Israel than for its website to be built using a platform created by and operated from that same Jewish state? Not really. But that’s the situation the BDS — boycott, divest, sanction — movement finds itself in today as news spreads that once again one of its main organs is using the Israeli company Wix’s services to operate its website. That leaves Students for Justice in Palestine, which got caught doing this two years ago left trying to explain why its okay for them to make use of an Israeli product while trying to compel others to boycott them. But the contretemps over the decision of the SJP chapter at the University of Denver to repeat the actions of its Cornell University group two years ago once again gives us insight not only into the absurdity of Israel boycotts but the psychology of hate at its core. Their embarrassment, along with the growing number of incidents of hate speech associated with BDS and humiliating failures, should inform the decisions of those asked to join this movement as well as members of Congress as they ponder whether to include language prohibiting such boycotts in trade legislation.

The only word in the colloquial dictionary that adequately describes SJP’s excuses for using Wix is lame. BDS’ers work hard to convince the world that Israel should be treated as a pariah state and to refrain from all economic intercourse with it. Their purpose is to wage war on it and, by gradually tightening the economic noose, force its collapse. Yet SJP thinks its perfectly okay for them to avail themselves of the brilliant achievements of the “Start-Up Nation.” Like all those who wish to see Israel eliminated, but are not prepared to give up the benefits that come from employing the products it creates, including medical advances that save lives, BDS groups are forced into the humiliating position of saying that they can decide which kinds of economic interaction with Israelis is acceptable.

In its defense, the Denver chapter cited a statement issued by its Cornell counterpart in 2013 when it was caught doing the same thing. That absurd document says that it is wrong for anyone to think BDS is about an absolute ban on Israeli products or anti-Semitism. Here’s an excerpt:

Let us be clear: BDS is not abstention, nor an absolute moral principle. It is not isolation or withdrawal, and it does not entail a rejection of everything Israeli. It is not anti-Semitic, and it has nothing to do with the merits of Israeli technology. BDS is not the attempt of beautiful souls to avoid contamination with oppression and keep their own hands clean: it is a tactic within a larger strategy, and it is beginning to work.

In other words, they say that by using some Israeli products that proves they are not anti-Semitic. This is utterly illogical and speaks of nothing more than facile self interest. But as laughable as this attempt to explain the unexplainable might be, it’s worth noting two key facts about this kerfuffle.

One is that their claim that they can wage economic war on Israel without being anti-Semitic is a flat out lie. The purpose of BDS is not to change Israeli policies or to adjust its borders, positions that are legitimate, if often wrong-headed points of view about the conflict in the Middle East. Rather, its goal is to eradicate the Jewish state and to deny its people the right to self-defense, self-determination and sovereignty. Without these rights there is no possibility that Jews can live in safety as a free people in their ancient homeland. Israel is the one Jewish state on the planet and this is something that no one would think to deprive of any other people in the world. As such, BDS — the economic face of anti-Zionism — is an act of bias against Jews. And the term of art for such bias against Jews is anti-Semitism.

Second, the claim that BDSers can decide which Israeli products to use and which may be banned resembles nothing so much as the pre-Holocaust claim of some anti-Semites that they would decide between the “bad Jews” that could be subjected to violence and those that were of some use and therefore should be allowed to live for a while. This practice is not only insulting, it shows the irrational hate at the core of a movement whose only purpose is to single out the one democracy in the Middle East for opprobrium while they ignore the hundreds of thousands of Arabs slaughtered by other Arabs in nearby conflicts. It also should remind those Jews who, because of their opposition to West Bank settlements, might think of boycotting those Jews with whom they disagree, how dangerous such a practice would be.

This foolish yet nevertheless sinister attempt to pick and choose which Israelis to boycott while seeking the state’s destruction should also inform legislators that they have an ethical obligation to ensure that our nation’s trade laws should be consistent in their opposition to such discriminatory practices. While the reauthorization of the Export-Import Bank has been controversial for reasons having nothing to do with Israel, there is now bipartisan support for including language that would cause it to consider BDS participation when deciding on loans. As Politico reports:

Specifically, the Ex-Im Bank would have to consider whether applicants for loans oppose “policies and actions that are politically motivated” and meant to inhibit “commercial relations specifically with citizens or residents of Israel.” In the past, Ex-Im has taken into account applicants’ stance on human rights and terrorism, prompting advocates of the new language to propose the new qualification.

Whatever your views about the advisability of having a financial institution that would assist companies trading abroad much as other countries do, it is vital that its funds not be used to assist companies or institutions that are supporting an economic war on the Jewish state. If Democrats are as sincere in their support for Israel as they claim to be, they will join with Republicans to ignore President Obama’s opposition to the new language.

AS the SJP demonstrates, BDS is a vile virus of hate that is as illogical as it is absurd. It must be opposed at every level. Those who fail to understand its malignant nature or treat its activities as acceptable conduct are granting it a legitimacy it doesn’t deserve. 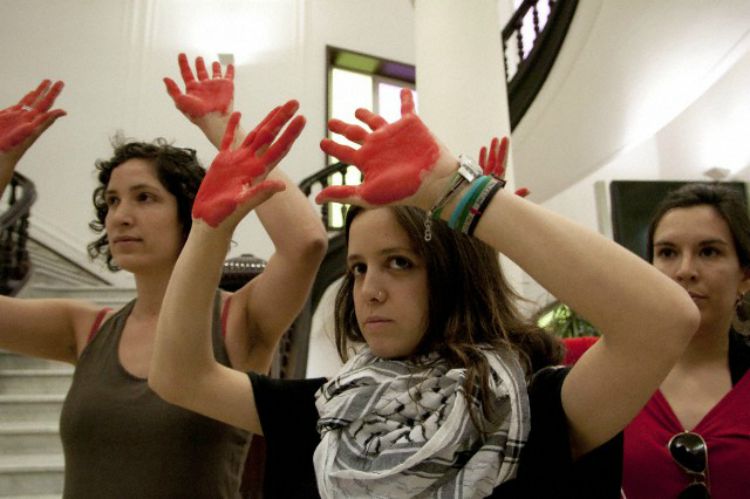