It was typical Donald Trump. The Republican presidential candidate’s decision to highlight the shooting death of basketball star Dwayne Wade’s cousin was crass, egotistical, and tasteless. Whatever one may think of the way Chicago has been run, using a senseless murder like that of Nykea Aldridge, who was an innocent bystander killed in the crossfire between two gunmen while pushing a baby stroller, was an appalling breech of common decency. The reaction to Trump’s tweet, which used Aldridge’s death as proof that “what I’ve been saying” about the problems facing African-Americans is right, was swift and furious. Trump later issued another tweet offering condolences but, of course, no apology.

But while this incident can serve as confirmation of Trump’s bad character, most of those bashing him are hypocrites. That’s because as bad as Trump’s shameless willingness to exploit a random violent crime might be, it’s no different from what President Obama, Hillary Clinton and just about every other Democrat has done many times when something terrible happens that might be used to promote gun control.

Democrats never hesitate to exploit mass shootings, no matter whether the weapon involved was legally purchased or if any of the “common sense” gun laws they support would have prevented the crime. Sometimes this exploitation is supported by survivors or relatives of the victims. Whether that is true or not, or if the motivation for the murders renders the provenance of the weapons irrelevant (such as when Islamist terrorists killed in San Bernardino and Orlando), nothing stops the president and other Democrats from proclaiming that the latest tragedy is just more proof of how right they’ve been all along when it comes to guns.

The only difference is that rather than helping to orchestrate the condemnation of such tasteless behavior, the liberal mainstream media praises and echoes such sentiments. When it comes to promoting more restrictive gun laws, regardless of their efficacy in terms of preventing crime, the same rules of conduct that were correctly used to condemn Trump’s tweets are thrown out the window. In such cases, there is no waiting period during which decent people are constrained to simply mourn the death and condole their families. President Obama’s first reactions are always about gun laws and no one in liberal media or the usual quotable celebrity suspects react to that with anything but applause.

As for Trump, he happens to be right that the social pathologies that afflict our inner cities can be traced in part to decades of liberal policies. Moreover, the ongoing murder spree in Chicago in spite of that city’s draconian gun laws and decades of uninterrupted Democratic rule speak to the moral bankruptcy of American liberalism. But it is hardly a surprise that African-Americans find his condescending commentaries about their communities to be insulting. They deserve better than what they’ve gotten from the Democrats, but the GOP will have to find a better messenger–or at least one that doesn’t dog whistle to his racist supporters or have a record as the country’s leading “truther” who worked to delegitimize the first African-American president–if there are ever to get more black votes. Treating the death of Wade’s cousin in this manner is a gift to Hillary Clinton, who is counting on a huge turnout from minority voters in November.

If Trump was wrong to tweet about this murder, then it is equally wrong for President Obama and every other Democrat to exploit other senseless crimes for their own political purposes. The chorus of condemnation he is getting from the same sources that echo Obama’s all-too-similar behavior in other instances illustrates the depths of liberal media bias. 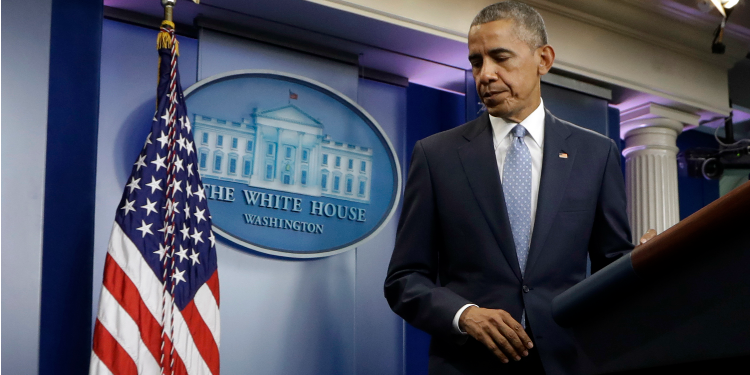