Rep. Keith Ellison appeared on track to be the next chair of the Democratic National Committee until the discovery of a 2010 speech in which Ellison indulged in anti-Semitic rhetoric about the nature of American support for Israel. Democrats—sunk in a post-election depression and eager to find a better response than the dreary routine of re-electing Nancy Pelosi as House Minority Leader—were falling in love with the symbolism of having a Muslim lead their party apparatus. That seemed the perfect answer to Donald Trump’s victory. If that involved ignoring Ellison’s past as a Louis Farrakhan cheerleader and his dubious record on Israel, Democrats also reasoned that his relative youth, minority status, and left-wing economic views would put him in sync with the Democratic base.

There was no shortage of liberal Jews ready to vouch for Ellison. Minnesotans lined up to testify to their friendship for a rising man in the Democratic Party and to claim that, at worst, Ellison was with Israel, as one Jewish “community activist” told the Forward, “70 percent of the time.” His history as an apologist for the fanatical anti-Semite who leads the Nation of Islam and his Million Man March was also dismissed as a youthful indiscretion. The Anti-Defamation League’s Jonathan Greenblatt took to Twitter last week to assert that Ellison was “a man of good character,” an “important ally in the fight against anti-Semitism “ and “on record in support of Israel.”

Greenblatt’s declaration that Ellison was kosher would have been enough to silence unhappy centrist, pro-Israel Democrats. But after journalist Steve Emerson’s Investigative Project on Terrorism published an audio recording from a 2010 private fundraiser in which Ellison claimed American foreign policy toward the Middle East is governed by Israel, even a shamed Greenblatt had to change his tune.

In the speech, Ellison said the following:

The United States foreign policy in the Middle East is governed by what is good or bad through a country of 7 million people,” Ellison is heard saying. “A region of 350 million all turns on a country of 7 million. Does that make sense? Is that logic? Right? When the Americans who trace their roots back to those 350 million get involved, everything changes. Can I say that again?

At best, Ellison seemed to be echoing the toxic Walt-Mearsheimer “Israel lobby” thesis, which claims American support for Israel is the result of a conspiracy that worked against U.S. interests; not the result of a bipartisan consensus that reflects the longstanding support for Zionism that is baked deep into the political DNA of this country. At worst, it was a blatant appeal to anti-Jewish and anti-Israel prejudice. The fact that IPT came across the speech because Ellison’s fundraiser was hosted by Esam Omeish, a leader of the Muslim American Society who has publicly called for “jihad” to “liberate” Israel from the Jews, puts his offensive comments in an even more damaging context.

Unlike the weak rationalizations for his past ties to Farrakhan, there is simply no way to explain away the meaning or the intent of Ellison’s remarks. An abashed Greenblatt called the statement “deeply disturbing and disqualifying.” He further noted:

His words imply that U.S. foreign policy is based on religiously or national origin-based special interests rather than simply on America’s best interests. Additionally, whether intentional or not, his words raise the specter of age-old stereotypes about Jewish control of our government, a poisonous myth that may persist in parts of the world where intolerance thrives, but that has no place in open societies like the U.S.

The main takeaway here is not Greenblatt’s embarrassing retreat. It’s the fact that Democrats have a choice to make. If, with the help of people like incoming Senate Minority Leader Chuck Schumer (who claims to be the guardian of Israel in Congress but has nonetheless endorsed the Minnesota congressman), Ellison is elected to head the DNC, the party will be making a symbolic statement that goes beyond the identity politics they prize so much. His elevation to the head of the party at a time when when it has few other national leaders is a sign that the Democratic drift away from Israel has reached a tipping point. Pro-Israel Democrats must either stop Ellison or quit pretending that their party is still a bastion of support for the Jewish state. 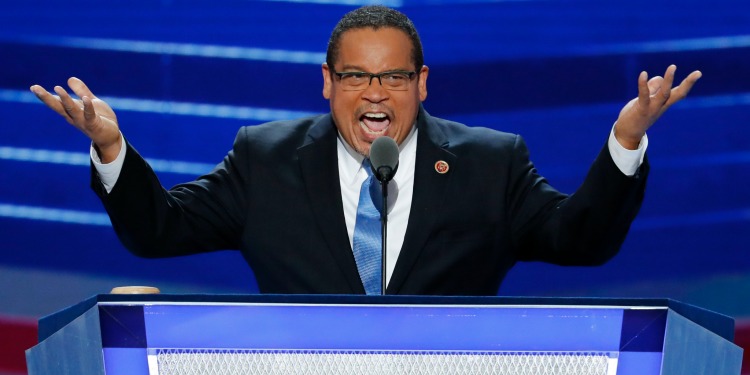