When the dust settled after the Senate voted on four separate gun control amendments, Democrats raced to place themselves in front of television cameras and began to grandstand. Led by Connecticut Senator Chris Murphy, who has become their leader on the issue since the Newtown massacre, they claimed the Republican majority had sold out the country to the National Rifle Association by refusing to support proposals that would expand background checks and prevent terrorists from legally obtaining guns. The Orlando shooting was a terrible tragedy for the country but it was a gift to Democrats who think exploiting the Republican stance in defense of gun rights will turn into electoral gold. The point of the exercise was to get Republicans on the record voting against popular, if meaningless, ideas. By losing the votes, they won. Yet, as is often the case with politicians with no sense of proportion or decency, they still managed to pluck defeat from the jaws of victory.

By claiming that “Republicans have decided to sell guns to ISIS,” Murphy jumped the shark just as surely as Donald Trump did when he went too far in criticizing President Obama’s response to Orlando by insinuating that the commander-in-chief might have a hidden agenda favoring the terrorists. In both cases, these extreme charges reflect what some partisans actually think but prudent people know better than to say aloud. But by going too far, they threw away their gains. Calling senators slaves to the NRA is one thing; calling them terrorists is quite another. By succumbing to the temptation to take his argument just one step too far, Murphy dropped the veil on the Democrats’ gun violence victim compassion show and revealed to us that he was only playing the shallowest kind of partisan politics.

Let’s concede that the ideas of expanding background checks and denying guns to people on the FBI’s terrorist watch list are insanely popular. Nobody in politics can say they want terror suspects to be able to buy guns or for there to be ways for the mentally ill or criminals to evade background checks. But it is equally true that none of these measures would really have stopped any of the terrible mass slaughters that have horrified the nation. That’s as true of what happened in Orlando as it was in Newtown. What happened in the Senate in the last few days was a meaningless charade intended to change the narrative of Orlando from one about the latest Islamist terrorist attack, for which Democrats have no coherent response, into something more in their comfort zone.

Embarrassing the Republicans was the whole point of yesterday’s votes. Indeed, Murphy admitted as much when he said “some of this is going to turn into an electoral operation.” That was made obvious by the Democrats’ background checks amendment. It was largely designed to ensure that Pennsylvania Republican Pat Toomey would vote against it. Toomey had braved the ire of the NRA three years ago when he co-sponsored a bill on the same issue with Democrat Joe Manchin expanding background checks. But Murphy’s proposal went much further than Manchin-Toomey. That meant Toomey’s Democratic opponent can campaign against him this fall as he runs for re-election by claiming he’s against the very idea he championed, even though Manchin and several other Democrats from pro-gun states also voted it down. But that effort was undermined when Toomey’s Democratic opponent Kate McGinty immediately took up Murphy’s line about ISIS by alleging the senator was weak on terror–a line of attack that is not likely to work.

The Democrats also deliberately torpedoed any attempt at compromise with GOP moderates who were hoping to pass something about banning gun sales based on the terror watch list. New Hampshire Republican Kelly Ayotte, who faces a tough re-election fight this fall, actually voted for both the Democratic and the Republican versions of the amendments. That vain attempt to build support for passing something only earned her the mockery of Democrats who think the country’s mood on gun control is changing in their favor.

Whether or not that’s true, if Democrats force Republicans to defend their opposition to these largely meaningless proposals by citing civil liberties concerns regarding people who are wrongly placed on watch lists, they win the argument. No one cares about the constitutional rights of terror suspects, and doing so makes it sound like the GOP is merely reading NRA talking points. That’s true even if security experts point out that denying guns to those on the watch list will actually hurt their investigations and do nothing to prevent bad guys from getting weapons from other sources.

Their problem is that, as much as the polls show overwhelming support for background checks and terrorist bans, Democrats can’t seem to stop themselves from demonizing their political opponents in a way that hurts them more than it does the GOP. Considering how much they despise Trump, their willingness to mimic his over-the-top attack lines is astonishing and just as counterproductive. Calling Republicans who defend the Second Amendment terrorists exposed Democrats as hyper-partisans who are just trying to exploit a tragedy. That might have won them a news cycle yesterday but it’s not the formula for flipping the Senate. 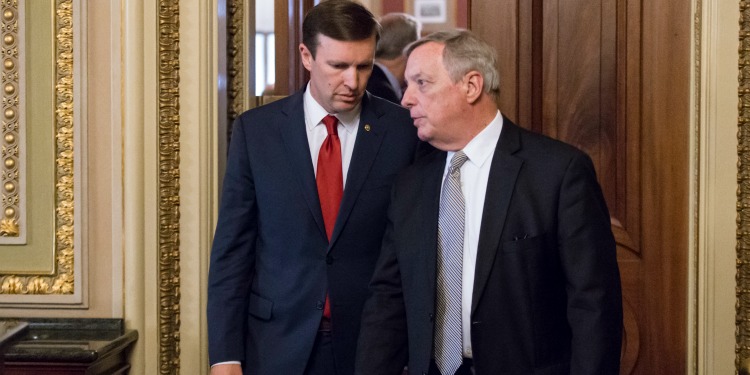