In an election year in which the bizarre has become the expected, Donald Trump’s trip to Mexico followed by a rabble-rousing speech on illegal immigration in Arizona provided more proof that his campaign remains the greatest political show on earth. But the main question today is not so much whether the wall he says he’ll build will be as “big and beautiful” as he says, or how he’ll pay for it, or the deportation force that he boasts will begin ridding the country of illegals. It’s whether this stunt is enough to transform an election, which was rapidly developing into a rout over the summer, into a tight race that he might win.

Let’s first concede that, although the two parts of his Wednesday adventure contradicted each other, they did transfix the nation in the same way that his various stunts and outrageous statements monopolized press attention during the Republican primaries. The polls have trended in Trump’s direction the past week, and his various attempts to moderate his image combined with more revelations about Hillary’s emails that have damaged her already diminished credibility have cut into her lead.

But to have a chance to win, he needs to do more than hold onto his base that cheer his every utterance. The meeting with the Mexican president was the natural follow up to the talk about “softening” his immigration stand the last two weeks. It says something about how low our expectations are for Trump that his ability to stand still and not embarrass himself during a joint press conference in Mexico City was deemed an act of presidential stature. By Trump’s own standards, it was a low energy performance, and he wimped out by not mentioning his standard refrain of having Mexico pay for the wall when given a chance to deliver the demand face-to-face.

Trump then flew back to the U.S. where he delivered a speech in Mesa, Arizona to a raucous crowd in which he doubled down on much of his inflammatory rhetoric about immigration and immigrants. The centerpiece of it was his standard rhetoric demonizing the illegals as violent criminals who threaten Americas with rape, death, and destruction. While America has every right to enforce its laws and there are legitimate concerns about the sanctuary cities that have made obstructed the government’s attempts to detain and deport criminals, Trump’s appeal to fear at a time when illegal immigration has already declined precipitately was as overt as it was ugly.

Trump’s talk about his wall and his plan to deport illegals should reassure any of his supporters who might have been appalled by the way Trump and some of his surrogates have tried to moderate his stance. He left it unclear whether he really intended to implement a mass deportation of illegals but it’s likely his supporters will be satisfied with his pledge of a special enlarged deportation force.

Other aspects of the speech, such as his plan to have “extreme vetting” of all immigrants, ideological tests, and unwillingness to accept Syrian refugees who probably can’t be vetted were more defensible. But the main effect was to stoke anger and resentment and to present immigration to the country as a plot hatched against the American people by big business interests was typical Trump.

What yesterday’s events demonstrated is that, even as he has stumbled badly in recent months, Trump still retains his ability to keep the spotlight on his campaign. Love him or hate him, the nation can’t take its eyes off of him. That’s an asset to any campaign, especially one with little of the infrastructure it needs and virtually no get-out-the-vote ground game that is essential to counter the Democratic machine that Clinton has at her disposal. So long as Trump is the center of national attention, he should never be discounted, especially when matched against such a flawed opponent.

But once the dust settles from this unprecedented day, the fact remains that nothing that occurred in either Mexico or Arizona changes the basic facts about the election. It’s not clear that any of this, even the diplomatic pose he carried off in Mexico is going to convince the wavering Republicans and moderates he desperately needs to vote for him. The appeal to fear resonates on the right, but the atmosphere in Mesa is exactly what turns off Republicans who are on the fence about Trump.

Trump’s problem is that although anger about immigration mobilizes his fans, it still isn’t an issue that most Americans consider a priority. Reinforcing myths about the threats from foreigners and trade speak to a significant number of Americans who feel left behind by an economy that is no longer centered on labor-intensive manufacturing and the changing demography of the country. But there is no evidence that it is a winning formula for a general election in the 21st Century.

Even more importantly, if Democrats were worried about Clinton’s ability to generate the same massive turnout of minorities that helped elect and re-elect President Obama—and they should be—then Trump’s speech was just what the doctor ordered. If Hispanics were not already infuriated by Trump’s past antics, his latest utterances will tip them over the edge. Just as Trump mobilizes much of the conservative base (even as his rhetoric loses educated and female Republicans), it works even more to the advantage of the Democrats.

Trump may have energized his supporters yesterday at a time when they badly needed some encouragement. Thanks to the growing evidence of Clinton’s dishonesty, the race may get even closer. But the basic facts about the election remain unchanged. Trump still has no clear path to 270 Electoral College votes. 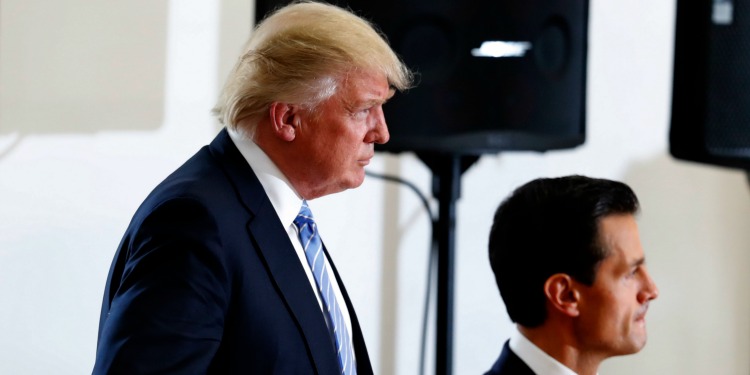