Something very odd has been happening in the Middle East and, as Sunday’s editorial in the New York Times illustrates, it has a lot of liberals seriously depressed. What’s bothering them? It turns out their collective noses are out of joint about progress toward Middle East peace and the fact that the Palestinian campaign that seeks to avoid direct talks and isolate Israel is failing. If that wasn’t bad enough, a series of diplomatic breakthroughs are happening on the watch of Prime Minister Benjamin Netanyahu, the man that the Times and the so-called “peace camp” has been busy slandering as an opponent of peace.

After several decades of unremitting hostility, some of the fiercest opponents of Israel are starting to view the Jewish state very differently. Covert ties with Saudi Arabia are now becoming more open. Egypt, whose cold peace with Israel remained frozen in open hostility since Anwar Sadat’s assassination, has a government that is no longer shy about treating Israel as an ally if not a friend. Jerusalem’s relations with much of the Third World, especially African nations, are also warming up.

Those who care about thawing tensions between Jews and Arabs should be applauding all of this. That’s especially true of those voices that spend so much time deploring Israel’s isolation and the idea that it is an armed camp that is locked in perpetual combat with the entire Muslim and Arab world. But the Times and others on the left are lukewarm about these positive developments for their own reasons.

The first is that Israel and its Arab neighbors have been drawn together in large part through their mutual antipathy for Obama administration policies, and most specifically about the Iran nuclear deal. The Times has been one of the principal cheerleaders of the pact, which its advocates incorrectly claim has ended the nuclear threat to Israel and the Arab states. But those nations that are targeted most directly by Iran—Israel and Saudi Arabia—understand that U.S. appeasement of Iran advances the latter’s drive for regional hegemony as well as merely postponing the moment when it will achieve nuclear capability. The coming together of other Middle East nations in reaction to this travesty is evidence that those most at risk consider Obama’s false promises and his desire for a general U.S. retreat from the region a clear and present danger to the region.

Just as important is the Palestinian dismay about the willingness of many in the Arab world to embrace Israel as an ally. The irony is that both the Saudis and Egyptians hope to use their new ties with Israel to jump-start peace talks and Israel has signaled its willingness to try again. But that is exactly the opposite of what the Palestinian Authority wants. PA leader Mahmoud Abbas is appalled about the idea of being pushed into negotiations with Israel again because it will force him to either refuse peace offers (as he did in 2008) or to blow up the talks (as he did in 2014) to avoid being cornered again. The PA prefers to stick to its strategy of refusing negotiations while asking the United Nations to recognize their independence without first requiring them to make peace with Israel. New talks with Israel mean that strategy, which allows the PA to keep refusing to recognize the legitimacy of a Jewish state no matter where its borders are drawn, would be thwarted.

Ever since 1967, any hope of Arab reconciliation with Israel has been frustrated by Palestinian rejectionism. But that is a luxury that Cairo and Riyadh can no longer afford because of the nuclear deal and the rise of Islamist terror groups such as Hamas in Gaza, Iran’s Hezbollah auxiliaries in Lebanon as well as ISIS. Egypt rightly sees Hamas and ISIS as direct threats that must be faced. Moreover, Israel’s fears that a withdrawal from the West Bank would lead to a Hamas takeover there are viewed with more understanding in Cairo than they are at the Times.

Contrary to the Times assertion that neither Israel nor the Palestinians want peace, the Arab states understand that it is the latter that is unwilling to negotiate, let alone end the conflict for all time. As the Times notes, better relations between Israel and the Arab nations do not preclude a peace deal with the Palestinians. But those nations can’t wait for a sea change in Palestinian political culture that might permit them to finally say “yes” to peace to occur before they can cooperate with the Israelis to provide for their mutual security.

The outrage here is that when faced with a development that represents genuine progress toward ending the conflict, the Obama administration, its media cheerleaders and the rest of the left are nonplussed. They’re not only still stuck in an outdated concept about the centrality of the Palestinian problem but would prefer to see Netanyahu’s outreach fail rather than concede that they were wrong. 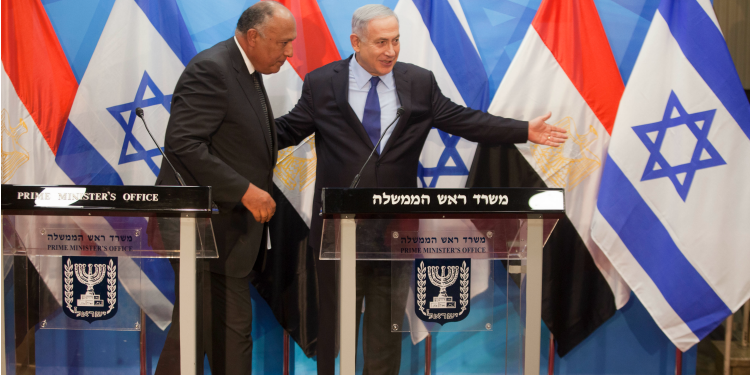