It’s been a big week for environmental extremists. President Obama and most world leaders trooped to Paris to pay homage to their models predicting doom for the planet while generally downplaying the more pressing threat of Islamist terrorism. The Paris climate change conference may well commit developed nations to both reduce their carbon emissions as well as to pay “reparations” to Third World governments. That will presumably compensate them for any limits on their activity as well as to make amends for the West’s sinful exploitation of fossil fuels as they built modern economies. The bill for that could amount to $100 billion per year with much of the cost being borne by the United States. But as New York Times economic columnist Eduardo Porter troubled to notice in his column today, these arrangements aren’t really what most of the ideologues driving the environmental movement are after.

As Porter notes, the problem with all the agitation about the West’s sinful behavior in burning carbon-based fuels is that in order to reduce enough emissions to make a dent in the environmentalists’ computer projections, developed nations can’t be content with caps or modest limits. If we believe the projections and are compelled to act accordingly, western nations, as well as many developing economies, are going to have to stop growing.

Yes, you read that right. A growing number of environmental activists, as well as some of their more mainstream voices, are advocating an end to economic growth. That would mean less production and less consumption, shrinking incomes to the levels they were in 1976, and even drastically cutting the average number of hours worked to keep us at subsistence levels.

As Porter points out, human history has known long periods without economic growth. Incomes were higher during the height of the Roman Empire than they were a millennium later. Indeed, until the development of capitalism, no growth was more or less the rule everywhere. And that’s precisely the conundrum at the heart of the environmental extremist agenda.

Though, as the Federalist’s David Harsanyi points out, the world leaders and the activists burned lots of carbon on their way to Paris and, no doubt, while living it up in the City of Light while they were there, their prescription for the rest of us is a return to a hardscrabble existence. Young hipsters may parrot Al Gore’s lies about the world burning up in our lifetimes, but they have no interest in living in the world that their parents and grandparents grew up in. Without economic growth, the next generation of college grads will have a lot more to complain about than their student loans.

As a number of credible scientists have pointed out, the 2 degree Centigrade average temperature increase that the Paris commitments will be based on is a number pulled out of thin air. So are much of the projections that will be used to calculate how much economic activity to which nations will limit themselves. This is not to say that climate change is a myth. The climate of the planet has been changing throughout recorded human history. That’s why Greenland was green when the Vikings landed there during a warming period. It’s possible that human activity is causing some temperature increase, but those are theories, not proven facts. But even if we want to hedge our bets and try doing something to avert the nightmare scenarios environmentalists have been peddling, the only way to achieve their goals would be to reduce our economies to zero or negative growth.

As Porter writes, that wouldn’t create a workers utopia but rather a nasty and brutish world in which the avenues for social mobility and advancement at the core of capitalism’s success would be closed off. That would be harder for the powerless and most vulnerable, not easier, and would create a new world that would resemble dystopian fantasies like “Mad Max” or “The Hunger Games” more than a Jeffersonian fantasy.

This isn’t an accident because at the heart of the zeitgeist that drives extremist environmentalism has always been a Luddite spirit. Global warming activists don’t want to destroy modern economies because they put carbon in the atmosphere so much as they see the whole edifice of capitalism as inherently sinful, even if, like Gore and the Paris partygoers, most of them gleefully enjoy heavy carbon footprints in their own lives. Listen to them roll out their predictions of doom for the planet and it’s easy to see that they’re not so much warning us as happily anticipating the chickens coming home to roost for a human race that dared to use its talents and resources to better the lives of people throughout the planet via capitalism and economic freedom.

These are depressing conclusions, and Porter doesn’t shrink from pointing out the disconnect between the projections and the toll of destruction and suffering that would result from a no-growth world. But, since he writes for the New York Times and no skepticism or even a sober evaluations of the poor cost/benefit ration of the kind of limits President Obama is planning on imposing on the United States is allowed, Porter shrinks from the logical conclusion to his piece. Instead, he breezily suggests in a throwaway sentence that technology will allow civilization to keep growing without the planet burning or melting.

That may be so. But maybe a serious evaluation of the situation would compel economists and scientists to rethink their assumptions and begin to understand that even if there are costs associated with the slight, incremental temperature rises that we may experience in the coming decades, the remedy the Paris partygoers are proposing is far worse than the disease. 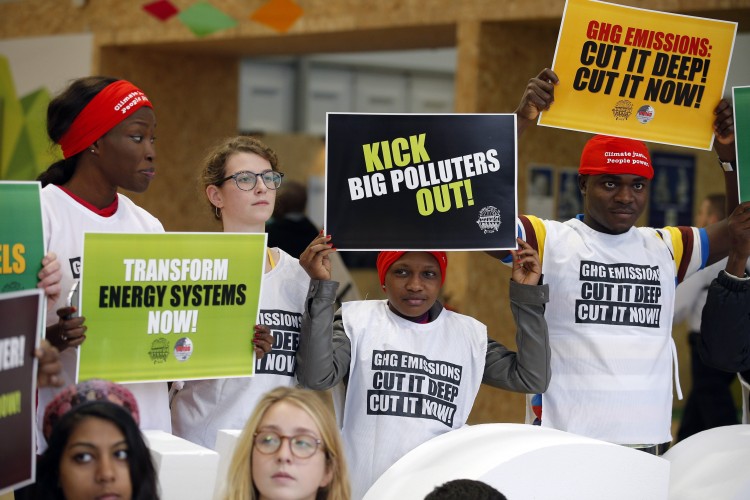