During his first term as prime minister of Israel, both foreign governments and liberals decried Benjamin Netanyahu as an enemy of peace just as they do today. Given the lack of credible negotiating partners, that’s always been a bum rap. Moreover, in retrospect, Netanyahu’s cautious approach to dealing with Yasir Arafat — the blood-soaked terrorist the U.S. State Department was doing its best to whitewash — seems unexceptionable and perhaps even a trifle too credulous since the prime minister signed off on a number of Oslo measures that further empowered the PA leader. But that wasn’t the only sign of Netanyahu’s willingness to engage in peace negotiations. He also exchanged messages with Syrian dictator Hafez Assad via American businessman and Jewish communal leader Ron Lauder about a possible deal about the Golan. The feelers came to nothing. But Netanyahu tried again in 2010 with Assad’s son Bashar. Again, the effort failed because the Syrians were never prepared to make peace with Israel even if it might net them the return of the Golan Heights as peace with Egypt gave them the Sinai. The same fate befell a previous try at negotiating peace with Syria conducted by Yitzhak Rabin.

If Netanyahu thinks backs on those efforts today, he must thank Heaven every moment that he failed. The best decisions are often the deals you don’t make. Even if Israel had been willing to believe that the Assad regime (whether run by the murderous father or the equally blood-soaked son) was prepared to keep its word about peace — a dubious proposition given the ideological animus of the Ba’athist regime against Israel — such an accord would have meant that the Heights would now be part of the battlefield where the Syrian civil war is being played out. The prospect of Assad’s army, his Iranian and Hezbollah allies, or their ISIS foes battling for control of the strategic Heights that dominant northern Israel is one that is too frightening for Israelis or their friends to contemplate.

Opponents of proposed land-for-peace deals involving the Golan have always worried that allowing it to fall into hostile hands would mean Syrian guns being able to return to their pre-June 1967 habit of bombarding the Israelis from the safety of the high ground. But had the Jewish state decided to give it to Syria in exchange for the hope of peace, such a gamble would place its population within reach of ISIS killers and/or giving Iran and its terrorist auxiliaries the chance to place much of the country under fire.

So it’s not surprising that a few years into a Syrian civil war that appears to be locked in a seeming stalemate that leaves both Assad and his allies as well as ISIS still in the field, Israel is signaling that it will never be so foolish as to even think of giving up the Golan. That was the reason for Netanyahu’s decision to convene his weekly Cabinet meeting on the Golan this past Sunday while vowing that the Golan will remain part of Israel forever.

Israel formally annexed the Golan in 1981, but the U.S. and the rest of the world did not accept the measure as legal. That still characterizes the U.S. stand on the Golan today. In response to Netanyahu’s pledge that the Golan would remain a part of Israel “forever,” President Obama’s State Department reiterated its position yesterday that the Golan is not part of Israel and that its return must be negotiated. But in a nod to realism that is usually lacking with respect to Israel from the State Department, spokesman John Kirby noted that, “the current situation in Syria does not allow this.” Yes, we know.

But there’s more to this story than a narrow escape on Israel’s part and the fact that even the Obama administration understands that expecting the Jewish state to abandon the Golan Heights to the chaos of civil war would be insanity.

The impetus behind every effort to force Israel to abandon the lands it won in a defensive war forced upon it by the aggression of its neighbors in 1967 has been the notion that trading land could win Israel peace. In theory, it sounds good and with respect to Egypt, the nation that provided the most dangerous armed force deployed in the wars from 1948 to 1973 when the Arab world tried to destroy Israel by invasion, it made sense. Anwar Sadat accepted the permanence of Israel when he went to Jerusalem in 1977 and in the peace treaty that followed he received back every grain of sand in the strategic Sinai Peninsula, a move that included the removal of Israeli settlements that had been planted there.

Could Syria have ever done the same?

That’s a dream that was cherished by several Israeli prime ministers, but the assumptions behind it were always false. Syria’s stability under the Assads was always more of a mirage than reality due in large measure to the fact that their regime was run by a religious minority — the Alawites — rather than a broad-based one such as the military regimes that have dominated Egypt with the exception of the year when the Muslim Brotherhood supplanted Hosni Mubarak prior to the army toppling it have been.

Israel’s giving up the Sinai was not that much of a strategic gamble because the barren peninsula serves as a buffer between the two nations no matter which flag is flying over it. But the Golan is far closer to Israeli population centers.

But the Palestinians and the Syrians have never shown any inclination to recognize the legitimacy of Israel no matter what territorial compromises or surrenders have been involved. Moreover, the nature of Palestinian politics and that of Syria is one in which the sort of rational calculations that have been the foundation of Egyptian policy toward Israel for the last 40 years (as well as that of Jordan which made peace with Israel without the exchange of land) is not imaginable.

Before Israel can ever think of giving up the Golan or the even more strategic West Bank, it must have neighbors that are capable of believing in and keeping the peace with a Jewish state. After the experiment in Gaza, no one outside of the far left in Israel believes in repeating that mistake in the West Bank.

Peace requires more than a simple exchange of land for a piece of paper, and that is all Israel would get if it is willing to roll the dice in the West Bank or the Golan. The chaos in Syria may make that obvious even to the Netanyahu government’s critics at the State Department. But the chaos in Gaza and the support of the Palestinian Authority for terror ought to make it just as obvious that a similar land for peace effort with the Palestinians would be equally suicidal.

Should Syria or the Palestinians ever evolve into societies that can sustain peace then, it’s likely that an Israeli government will be willing to discuss just about any sort of terms to achieve that goal. But until that seemingly utopian vision is achieved, the West Bank, as well as the Golan, will never change hands. 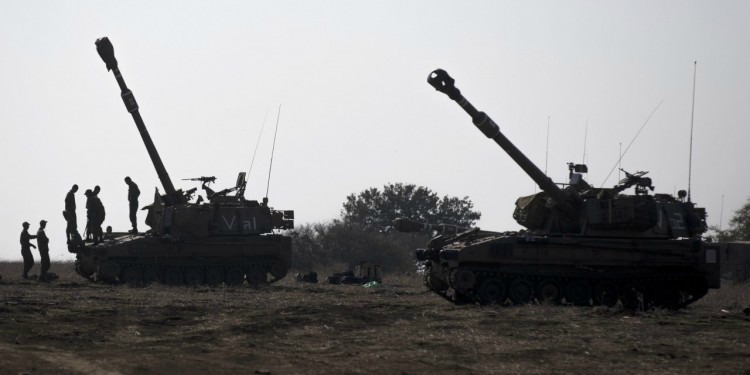