What if the popular narrative about police racism that’s being pushed by Black Lives Matter and others in the wake of last week’s fatal shootings is based on unfounded assumptions? That’s the question we are forced to confront today after the publication of a new study conducted by Harvard University’s Rolando G. Fryer Jr. that shows there is no evidence that blacks are more likely than whites to be shot by cops.

Fryer, an African-American economics professor, characterized the results as “the most surprising result of my career.” While FBI director James Comey is quoted in a New York Times Upshot piece about the study saying that reliable statistics about interactions between African-Americans and police have been lacking, Fryer’s effort — which was published under the rubric of the National Bureau of Economic Research — seems to fill in the gap. As the Times notes, Fryer began this undertaking because of his anger about the controversial shootings in Ferguson, Missouri and Baltimore that put the wind in Black Lives Matter’s sails. But what he discovered doesn’t back up the notion that trigger-happy white cops have declared open season on blacks.

Fryer studied more than 1,332 police shootings involving ten major American police departments in Texas, Florida, and California between 2000 and 2015. While he found that blacks were more likely to be touched or handcuffed by police during the course of investigations or confrontations, they were not more likely to be shot. To the contrary:

In officer-involved shootings in these 10 cities, officers were more likely to fire their weapons without having first been attacked when the suspects were white. Black and white civilians involved in police shootings were equally likely to have been carrying a weapon. Both of these results undercut the idea that the police wield lethal force with racial bias.

However, that left the researchers asking whether the police were more likely to fire if the suspect was black. Fryer and his team found that the answer to that question was no. In Houston, the city he spent the most effort studying, he found that blacks were 20 percent less likely to be shot by cops than whites.

Just as interesting is the fact that, again contrary to everyone’s assumptions, the ability of citizens to record encounters with police on their cell phones and post them to social media had no impact on the number of shootings reported. The racial breakdown in the shootings was no different in the era of Facebook videos than it was before then.

These results don’t mean that there are no rogue shooters wearing police uniforms or that racism must be dismissed as an issue not worth addressing. The disproportionate amount of crime that takes place in black neighborhoods can explain some statistics but not all of them. But the study does show that the blithe assumption that cops with impunity are massacring blacks has no connection to reality. Whatever problems  we must still address in a nation whose history is connected to racism, the narrative about police racism that has been promoted by Black Lives Matter and racial hucksters like Al Sharpton and legitimized by the Obama administration is basically false.

Each individual instance in which a police officer has killed a black person deserves tough scrutiny. And shooters should be held accountable if their actions are judged to be unlawful. Nor should we dismiss out of hand worries that police continue to stop blacks for questioning far more often than they stop whites. The higher rates at which cops touch and handcuff blacks may be related to the much higher crime rates in black neighborhoods, but that still doesn’t excuse the statistics.

Yet on the main issue of police shooting, the one that has dominated our discussing of late, Fryer found that not only are blacks not more likely to be shot; such shootings are extremely rare altogether.

How, then, is it that Americans have been persuaded to believe something that just isn’t true?

The answer is simple. The notion that blacks are at risk from police fits in nicely with liberal myths about law enforcement and a general refusal to admit that the America of 2016 is a different country than the place that existed a half century earlier, when Jim Crow Laws were still being erased by the newly successful Civil Rights movement. It is that lie that has kept a group like Black Lives Matter going with its destructive agenda that has led to anti-police violence and caused law enforcement to back down in many black neighborhoods, something that is actually costing African-Americans their lives. 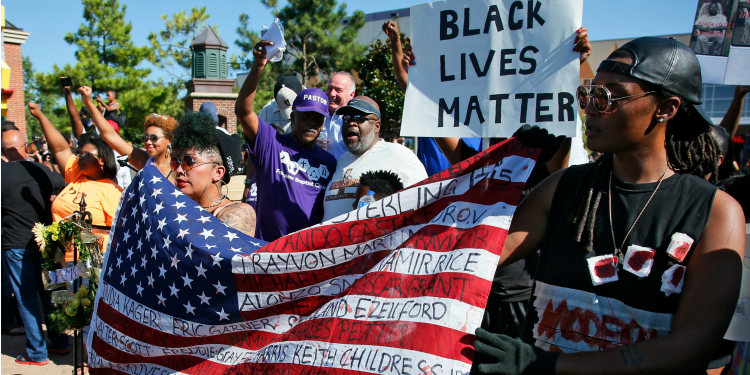