What does Hamas’s massive tunnel-building project mean to the people of Gaza? The answer can be summed up in one word: fear. They live in fear that the structures being dug beneath their homes will start a conflict that will bring down another round of death and destruction upon their families. Speaking off the record to the New York Times’ Gaza correspondents, various residents said anonymously what they couldn’t say in public at the fear of their lives. They had no doubt that much of the aid and building materials that has been sent to Gaza to rebuild the homes that were destroyed the last time Hamas started a war with Israel is being diverted to the Islamist terrorist group’s massive project.

But when asked as to whether Hamas building tunnels in residential neighborhoods whose only purpose is to facilitate cross-border terror raids into Israel is a war crime a Human Rights Watch official that the Times described as an “expert on international law regarding warfare, the best that Sari Bashi could come up with is a shrug of her shoulders. According to Bashi, building terror tunnels in residential neighborhoods is “not explicitly prohibited.”

Really? That, in a nutshell, sums up everything that is wrong with the international community’s response to the conflict between Israelis and Palestinians.

While Bashi, an American-born Israeli lawyer, admits Hamas has “an obligation to take all feasible measures to protect civilians, including not taking the armed conflict to civilian areas, to the extent possible,” she won’t go farther than that. That’s bizarre because it would seem obvious, even to those who aren’t “experts” in international law that structures built solely to facilitate efforts to cross an international border to murder and kidnap is illegal. Indeed, terrorism, whether it is committed via a tunnel or with rockets shot indiscriminately at cities (as Hamas did several thousand times during the 2014 war) or suicide bombings, is always illegal.

But in the upside-down world of human rights activism that a group such as Human Rights Watch epitomizes, ambivalence about Palestinian war crimes is always accompanied by vicious condemnations of Israel’s efforts to defend its people against things like terror tunnels and rocket fire. But while such organizations purport to have great sympathy for the plight of Palestinians, especially those in Gaza, their ire is almost always directed at the wrong people.

The Times article is a reminder that as much as Hamas poses a terrible threat to Israel, the people who suffer the most from its despotic rule are the citizens of Gaza, who not only must cope with the consequences of the armed conflict that the terror group will not give up but also live the lives of silence that is typical of anyone under the thumb of a brutal dictatorship.

Yet what is most remarkable about the way the conflict is reported and discussed by human rights group and the international community is that the subject of Hamas’s illegitimacy and war crimes rarely seems to come up. That is in spite of the fact that most of the commentary about the situation in Gaza tends to revolve around the poverty of the population and the devastation that was wrought by the 2014 war. But, of course, to focus attention on Hamas, how it came to rule Gaza and what its goals remain, is to shift the conversation away from the standard talking points about how settlements are the obstacle to peace or how supposedly “disproportionate” Israeli military responses are harming civilians and creating new generations of supporters for terrorism.

It should be recalled that the only reason why Hamas is free to create a tunnel system in and around the border with Israel is because in 2005 the Jewish state withdrew every soldier, settler and settlement from the strip. That is exactly what the human rights and international community wants Israel to do in the West Bank even if means the forcible eviction of hundreds of thousands of Jews from their homes. But Gaza didn’t become an incubator for peace or a place where human rights advocates could devote themselves to development projects. To the contrary, Hamas won legislative elections and then ultimately ousted the Fatah-run Palestinian Authority in a bloody coup. Once in control, it created what is for all intents and purposes an independent Palestinian state in all but name that is dedicated to one goal: resisting the Israeli “occupation.”

A Hamas spokesman justified the building of tunnels to the Times by saying that, “as long as there is Israeli aggression against us, the tunnels will be our priority.” But for Hamas, “occupied” territory is not a reference to the West Bank or even Jerusalem. It is quite clear that the “occupation” refers to all of the Jewish state, including the towns, villages and kibbutzim just across the border in southern Israel.

Surveys of Palestinian public opinion show that most of the people of Gaza and the West Bank, probably share Hamas’s goal of destroying Israel rather than merely getting their own state alongside it. But the residents of Gaza understand that they are the ones to pay for this ideological obsession.

Moreover, that price is not paid only in the inevitable civilian casualties that result when Hamas uses civilians as human shields for the entrances to tunnels or its rocket launchers. They also pay for it in the way Hamas diverts all the resources that might be devoted to rebuilding homes or economic development to build its military infrastructure including tunnels with all the comforts of home. In Gaza, the bomb shelters are for the bombs and those who shoot them, not civilians. And if that wasn’t bad enough, they also pay for it because of the accidents that result from the tunnel building process, both in terms of the numerous people who are killed in cave-ins and, as the Times notes, the hazards that are created for residents who live above the digging.

But the main thing to understand about Gaza is that an Islamist terror group tyrannizes it and is expending enormous resources, from both its Iranian sponsors (newly enriched themselves by the nuclear deal it struck with the Obama administration) as well as more philanthropic donors with better intentions in order to create an infrastructure that will facilitate murder of Israeli civilians. To that, the international community continues to respond with merely the same shrug of the collective shoulders than Human Rights Watches gives the question of whether building terror tunnels in civilian neighborhoods is a war crime. So long as Hamas is in power in Gaza, not only will this security dilemma persist but it will also render any already remote hopes for peace a pipe dream. That is another crime about which human rights groups seem not to care. 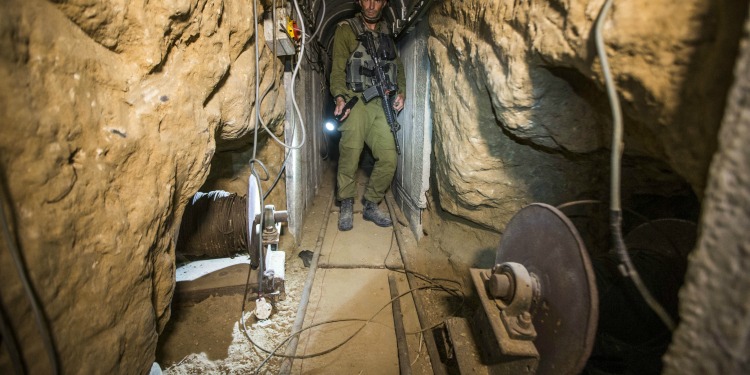