In today’s New York Times Vice President Joe Biden lays out an argument for why Senate Republicans should surrender and let President Obama create a liberal majority on the U.S. Supreme Court. But in order to do that, he must explain why Americans should ignore a 1992 speech he made on the floor of the U.S. Senate in which he demanded that the first President Bush wait until after the next presidential election before nominating anyone for the court should an opening occur before November of that year. In other words, faced with almost exactly the same situation as we have now — with the White House and the Senate controlled by opposing parties — Biden thought that it would be wrong to drag the country through a divisive confirmation fight in the middle of a presidential election.

But if Biden were really interested in the truth he would have to admit that the problem goes back further than 1992. It was, after all, Joe Biden who did as much as anyone to break the court and to ensure that all nominations will be bitter partisan fights.

Biden understands that the text of his 1992 speech is a rock solid argument in favor of exactly the stand that Majority Leader Mitch McConnell is taking since he said that the Judiciary Committee, which he chaired, would not even schedule hearings for such a nomination. Biden may now be cursing the C-Span archive for rescuing his speech from its well-deserved obscurity. Of course, the entire address was a typical Biden bloviation going on for more than an hour that was heard at the time by few people other than C-Span addicts. But rather than admit that his words justify the GOP’s current stand, he has chosen to be a good administration soldier and tells us to ignore our lying eyes and instead to focus instead on the “broader meaning” of the speech which he somehow construes to mean the opposite of his intent at the time.

Like similar comments made by Senator Chuck Schumer in July 2007 (fully a year and a half before President George W. Bush’s term expired) about Senate Democrats refusing to consider any nominations from the sitting Republican president, Biden’s speech illustrates not only Democratic hypocrisy but the importance of the philosophy of the man the two Democrats are now trying to replace with a fellow liberal. Justice Antonin Scalia believed in textualism, the belief that laws mean what they say. Words have meaning but, to modern liberals, the text of any law can be deconstructed or misconstrued or just plain ignored. That’s how liberals have helped trashed the Constitution in recent decades and why Biden and Schumer think they can get away with contradicting past standards with disingenuous explanations like the vice president’s Times op-ed that surely not even the most partisan Democrats can read without chuckling.

As I’ve noted before, there’s nothing wrong with Democrats wanting to seize this opportunity to transform the court. But I do mind their attempting to pretend their partisan desires have anything to do with defense of the Constitution or, as Biden sententiously puts it, “the integrity of the U.S. Senate.” This issue remains one in which where you stand depends on where you sit. If Democrats would have refused to confirm a Republican nominee in 1992 and 2007-08, so, too, would Republicans in both those instances gotten up on their high horses to demand that it was the Senate’s duty to confirm the choice of a GOP president. In Washington, D.C. hypocrisy has always been a bipartisan affair.

Yet since Biden has been chosen by Obama to be the point-man of his futile attempt to pressure Republicans into waving the white flag on the court, it might be useful for him to do a mea culpa for having turned the nomination process into the partisan maelstrom it has become.

By that, I refer to the confirmation battle over Robert Bork, the distinguished conservative jurist nominated to the court in 1987. Bork’s name has come up on the margins of the current arguments over replacing Scalia because the last time the Senate approved a Supreme Court nomination during a presidential year was 1988 when Anthony Kennedy was confirmed. Bork had been nominated in July 1987 by President Reagan to replace Lewis Powell when he retired. Prior to that nomination, when Biden had been asked whether he would confirm a qualified conservative to the court, he had said he would. Biden claimed to adhere to the tradition that held that presidents were entitled to name justices and that the only reason for the Senate to refuse to confirm them would be if they were clearly unqualified for the highest court in the land or if there were ethical considerations.

As George Will recounted in a column published only days after Reagan nominated Bork, Biden had said this before Bork was nominated:

Say the administration sends up Bork and, after our investigations, he looks a lot like Scalia. I’d have to vote for him, and if the [special-interest] groups tear me apart, that’s the medicine I’ll have to take.

There was little difference between the records of Scalia and Bork. But when those liberal groups screamed about the nomination of a conservative, Biden, the head of the Judiciary Committee in a Senate that had only recently flipped to Democratic control, changed his mind. He joined other Democrats in an all-out assault on Bork’s character. The conversion of Judge Bork’s name from a noun into a verb was highlighted by Ted Kennedy’s scurrilous smear on the floor of the U.S. Senate, in which he falsely claimed Bork favored the subjugation of women and blacks, banning the teaching of evolution, unlawful searches of private homes and government censorship of artists and writers. Biden not only did not correct Kennedy’s lies but seconded them in his efforts to misrepresent Bork’s record. Biden and Kennedy dragged Bork’s good name through the mud in the name of a blind partisan fury driven by ideology.

Their effort was successful in preventing Bork’s confirmation. But the damage they did was to more than one conservative jurist. Biden’s hypocritical flip-flop on a man he already knew was qualified set the standard by which all future nominations would be judged. No matter how distinguished the nominee, if he or she were a conservative, Democrats would be prepared to trash them in order to get their way. While I would hope Republicans would never lie about an Obama appointee the way Biden and Kennedy lied about Bork, they have no choice but to be as obstructionist as the Democrats have been.

When we remember what he did in 1987 as well as what he said in 1992, Biden’s pious proclamation in the Times is exposed as nothing more than partisan hot air. Republicans should stand firm in their opposition to letting Obama flip the court. If Democrats win the election in November (and Donald Trump’s lead for the GOP nomination makes it more likely than not that they will), they will have a strong case to make that it is their right to control the Supreme Court. Until then, the Times and the administration should spare us these embarrassing displays of hypocrisy. 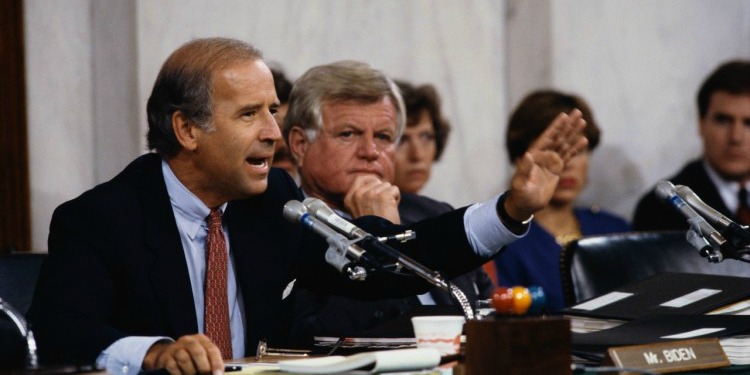