After their release of a series of videos depicting graphic murders of prisoners by ISIS terrorists, you might have thought there was nothing the Islamist group could do to further horrify the world. But last week’s graphic report in the New York Times describing the system of sexual slavery the so-called caliphate has set up in Iraq and Syria and which is sanctioned by their view of Islam makes clear the depths of barbarism into which this group has sunk. If that wasn’t chilling enough, last week we also learned that Kayla Mueller, the American aid worker who was held as a hostage by ISIS, was not only tortured but repeatedly raped by the leader of the Islamic State Abu Bakr al-Baghdadi. Yet the response of some in the liberal media to this is to question whether such reports make us think ill of Islam or Muslims. While this is surely the view of only a minority, it does seem to reflect the persistent strain of thinking that sees the supposed spread of Islamophobia as greater than the threat of terrorism. But whether such thoughts are expressed by cable news personalities or demonstrated by the statements of the U.S. government, the refusal to think clearly about the nature of Islamic terrorism is at the heart of our failure to confront this danger.

The Islamophobia mania was illustrated on CNN this past Friday morning when morning host Chris Cuomo was doing a segment reacting to the New York Times feature that it aptly termed a “Theology of Rape.” As Mediate reported, while interviewing an advocate for the rights of Muslim women, Cuomo said the following:

“Let’s finish this part of the discussion on a point that you feel often needs to be made,” Cuomo said to Muslim woman’s rights activist Qanta Ahmed. “This feeds the impression that these Muslims are animals, savages and their faith makes them that way. And it feeds an impression of what Islam is. What is your response to that?”

Ahmed ignored Cuomo’s cue to switch the discussion from one about ISIS behavior to the possibility that learning the truth about their activity might cause some in the West to think ill of Islam. But, as shocking as it was, his statement must be viewed in the context of the last 15 years of liberal commentary that has worried less about the rise of Islamist terror than it has about the possibility that some Americans might think ill of a world religion that they are about the terrible deeds committed by people who say their actions are motivated by their faith.

The fact is the overwhelming majority of Americans are smart enough to understand that the behavior of members of ISIS, al Qaeda, Hamas or Hezbollah doesn’t mean their Muslim neighbors are disloyal or violent. Though many in the media have attempted to portray American society as hostile to Muslims or to speak of a post-9/11 backlash, there has never been any objective evidence brought forward to prove these theories. To the contrary, American popular culture and our government — under both George W. Bush and Barack Obama — have consistently bent over backwards to draw a distinction between Islam and terror. Nor has there been any surge in hate crimes against Muslims, as a decade’s worth of FBI hate crime statistics have proven.

But the fear of Islamophobia runs deep and not only in a media environment where statements like that of Cuomo seem unexceptionable. It is the same thinking that lies behind the refusal of President Obama to label ISIS or any other such group as an example of Islamic terror. The administration has taken the view that to speak of ISIS in that manner gives credence to the group’s claims to speak for Islam. The question of what is or is not Islamic isn’t something the U.S. government should be worrying about but the U.S. remains determined to ignore the connection between a popular form of Islam and the actions of ISIS.

However, the Times report about ISIS’ treatment of Yazidi captives removes all doubt about the link between faith and terror. While rape has been an element of warfare throughout history, in the case of ISIS it is not a matter of the way conflict inevitably breaks down the norms of civilized behavior. What is so frightening about it is this crime that has been given sanction by the leaders of a branch of a faith and a movement with a widespread following. In ISIS, rape isn’t just something that happens when the bonds of law are broken by violence but something sanctioned by followers of a great worldwide religion.

Though this is something that is not endorsed by all or even most Muslims, it is no longer possible to pretend that this is just bad behavior by a group of people who happen to be Muslims. It is a crime that is being committed because the followers of this faith think it is mandated by their religion. Moreover, this is not a ragtag group of isolated nutcases but a movement that seems to appeal to a growing number of Muslims, both in the Middle East and even in some isolated cases, in the West.

That’s why Cuomo’s gaffe and even President Obama’s consistent refusal to speak of Islamic terror are both related and significant.

It has been a year since President Obama pledged to defeat ISIS but there is precious little evidence that the West has done anything more than slow its growth. The virus of Islamist terror won’t be stopped by half-hearted measures. Leaders who won’t tell the truth about the identity of the enemy won’t stop the atrocities exposed by the Times. ISIS is not only promoting a real “rape culture” but one sanctioned by a branch of Islam that can boast of a huge following. Speaking such truths about the barbarous nature of these murderers and understanding that it is rooted in their faith is the necessary beginning of the effort to win this war but Islamophobia fears are stopping us from doing so. Both Obama and Cuomo demonstrate why we have yet to start that effort. 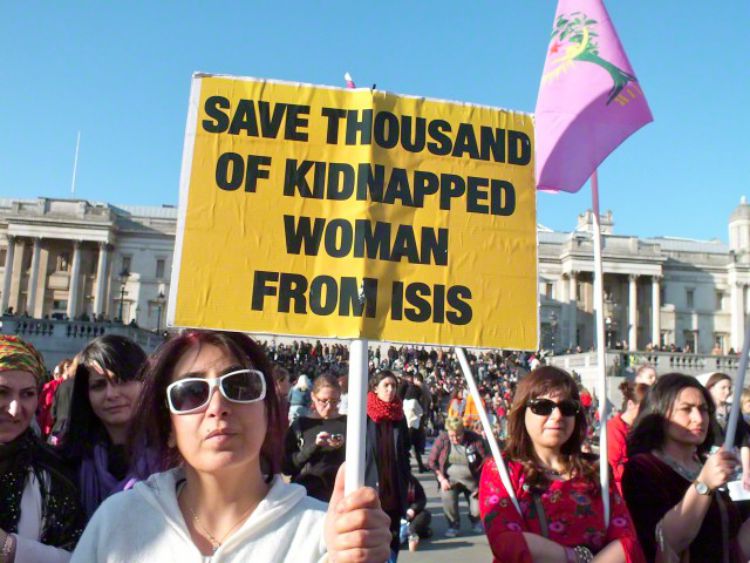