It is no secret that neither Israeli Prime Minister Netanyahu, nor the members of his government and the political parties that make up his coalition, are particularly popular with either the U.S. government or the American media. The same can be said for much of the American Jewish community that tends to see Netanyahu’s views on the peace process — which represent the consensus of the Israeli electorate — as being at odds with the political liberalism that most of them espouse. But there is one member of the Knesset, who is pretty popular in the United States. Ayman Odeh, the head of the Joint List of Arab political parties in Israel’s parliament, received a hero’s welcome in the media this week when he arrived for a visit to the United States.

The New York Times embraced Odeh as a voice for “a more inclusive Israeli democracy” as well as “the creation of a Palestinian state.” But Odeh was embraced for more than positions that are odds with those of Netanyahu. Odeh was treated as a tribune for a downtrodden Israeli Arab minority that is finally making its voice heard in the Jewish state. He was also taken at face value when he claimed the fact that his alliance gained a piddling 10,000 Jewish votes (out of 4.2 million that were cast in March) as proof that “Arabs and Jews refuse to be enemies.”

But an incident involving a meeting of Jewish organizational leaders to which he was invited told us more about Odeh’s real agenda and the charges that were made against Netanyahu for racism earlier this year than the platitudes he spun for the Times. Though Jewish groups have been as eager to celebrate Odeh and the Joint List as proof of the reality of Israeli democracy and have exhibited no reluctance to hear his views on the issues, he had some interesting conditions for such meetings. He refused to even set foot in the offices of groups that are dedicated to supporting Israel’s existence and helping Jews immigrate there.

That’s what happened when he was invited to a meeting of the Conference of Presidents of Major American Jewish Organizations. Rather than seize the opportunity to influence the umbrella group that, along with AIPAC, represents those organizations concerned with Israel, Odeh said he wouldn’t go into their offices since doing so would compromise his integrity and principles.

The prospects of peace in the Middle East do not hinge on the question of who enters a New York City office building. But the incident was nevertheless instructive. Despite the attempt to sell Odeh and his Joint List as a reasonable Arab political alternative to Netanyahu, his bizarre decision to boycott the Conference tells us plenty about the alliance he leads and what his intentions for Israel truly are.

It should be first understood that the attitude of the parties that came together to form the Joint List is not one that is actually compatible with any reasonable notion of peace between Israel and the Palestinians. The components consist of Hadash, the Israeli Communist Party that is led by Odeh and seeks not only the end of Israel as a Jewish state but its replacement by a communist one. His partners are Balad and Ta’al, which are secular Arab nationalist parties that simply wish to abolish Israel as a Jewish state and replace it with a secular one that will abandon Zionism. Then there is the United Arab List, which is an openly Islamist party that seeks to abolish the Jewish state and replace it with an Islamic theocracy. Though their members don’t necessarily advocate violence to achieve their ends, for the most part, they clearly sympathize with those who do use violence as has been demonstrated throughout the last two months of the stabbing intifada or during last year’s war with Hamas in Gaza.

One can sympathize with the dilemma of members of a national group that finds themselves an Arab minority in the one tiny Jewish state that is surrounded by 21 other Arab states in the region. Israeli Arabs have more political rights almost any of their brethren elsewhere possess. Indeed, they are equal under the law in Israel and serve in the government, the judiciary and the country’s foreign service. Moreover, by joining forces the most popular Arab political parties have been able to create a coalition that now stands as the third largest faction in the Knesset. As such, Odeh’s Joint List has every right to take whatever stands it wants, provided they don’t advocate violence. Moreover, they have the opportunity to use their greater clout to advance the interests of Israel’s Arab minority, which has often been neglected both by a political system that has little interest in them as well as by corrupt leaders that have done little to help their constituents.

But, unlike the New York Times, let’s not kid ourselves that the Joint List is a force for peace or coexistence.

A two-state solution would, as Odeh advocates, be a good solution to the conflict. Of course, it might be possible if any Palestinian leader were prepared to recognize the legitimacy of a Jewish state no matter where its borders might be drawn. But neither Palestinian Authority leader Mahmoud Abbas nor his Hamas rivals can or will do that. Just as important, neither will Odeh. His idea of a two-state solution is of an all-Arab Palestinian state in the West Bank and Gaza alongside an Israel in which the Jewish majority is stripped of their rights of self-determination. That’s a formula for more violence, not peace, let alone coexistence.

Moreover, if Odeh can’t sit down in the New York offices of a Jewish group dedicated to helping their fellow Jews in Israel, how is it possible to imagine his loose coalition of communists, secular anti-Zionists, and Islamists helping to further peace in the Middle East. Sadly, the popularity of men like Odeh, whom even some of their fellow Israeli Arabs understand are more interested in self-aggrandizement and exploiting the conflict than in helping their people, shows not only the failings of Israel’s political system but also how remote the chances of peace really are.

Odeh’s views and his hostility to Israel’s existence, despite his holding office in it, also highlights the unfairness of the charges that were laid against Netanyahu in March when he urged Jewish voters to turn out in large numbers so as to deny Odeh power. At that time, there was a fear that Odeh might be able to use his clout if the election led to a deadlock between the Likud and its left-wing opponents. While Netanyahu’s words may have been inartful, the sentiment he expressed was not unreasonable. No one who wants peace should wish for such a person or a party of Islamists, anti-Zionists and Communists to achieve power. Those Jewish groups that fete Odeh and revile Netanyahu are advancing neither the cause of Israel or the chances of peace. 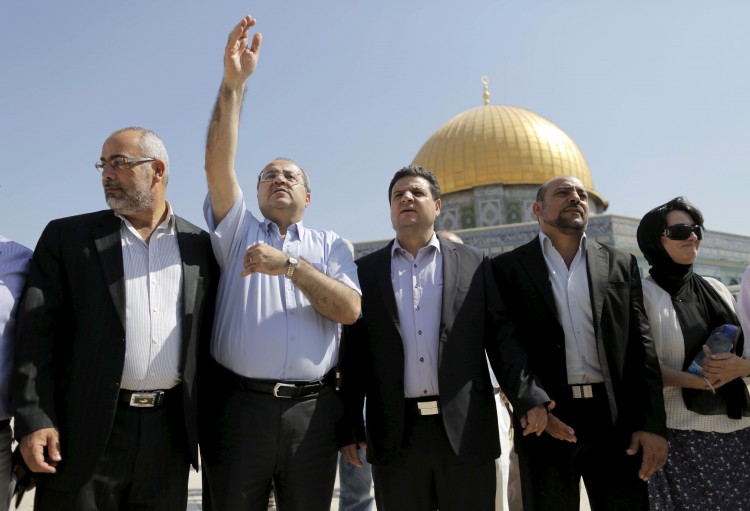