After a year in which he was the object of increasingly nasty invective from grass roots Republicans, as well as unsparing criticism from pundits and even his own donors, Jeb Bush has finally gotten some respect. The gentlemanly manner with which he exited the GOP presidential race earned the former Florida governor the sort of plaudits that had eluded him during his futile efforts to become the third President Bush. Those not praising him for having conducted himself in a principled fashion are instead striking an elegiac tone about the official end of the Bush dynasty’s reign in Republican politics. Those are appropriate topics for a weekend that, as his supporters have been at pains to point out to critical journalists, isn’t a time to be kicking a man when he’s down.

But while Bush the man deserves our respect, the scale of the futility of his campaign can only be described as both breathtaking and historic.

As this chart shows, as of February 1 of this year, Bush raised a colossal $155.6 million to help elect him president. That amount was second only to the even more astounding $163.5 million that has been raised by Hillary Clinton (thank you, demons of Wall Street) for her campaign. Given the paltry returns for this expenditure, that puts Bush in the conversation for the title of the most unsuccessful presidential candidates in American history. John Connally earned infamy for spending $20 million to win exactly one GOP Republican delegate while getting crushed by Ronald Reagan in 1980. But Jeb’s effort is much worse on a dollar spent per delegate won basis since the four he won (1 in Iowa and 3 in New Hampshire) work out to have cost somewhere in the vicinity of $38 million apiece. When you add in the fact that a sizable percentage of that money was spent on efforts to trash Marco Rubio — the candidate that most of Bush’s supporters will now support — rather than boosting his own image, the catastrophe that was “Jeb!” will be remembered as long as Americans study politics.

But Bush did accomplish something important. Democrats — especially the two that between them have raised $238.6 million on presidential campaigns — are carrying on about the undue influence of money on politics and vowing to find a way to repeal the Supreme Court’s Citizens United decision that correctly treated independent expenditures on campaigns as political speech protected by the First Amendment. But Jeb has given us all one more lesson proving that these sermons about money buying elections are bunk.

As we have just seen, all the money in the world would not by itself be enough to elect Jeb Bush president. The current GOP frontrunner — Donald Trump — also proves the opposite case. Though he brags about being self-funded and, therefore, immune to the evil influences of contributors, he had only spent $12.4 million prior to this month in the course of rising to the top of the polls before winning the New Hampshire and South Carolina primaries. Of course, Trump has benefitted from more free airtime in terms of wall-to-wall coverage of his insults, boasts, and false statements from the mainstream media than any other candidate (According to the Media Research Center, in January, the three broadcast networks gave him twice as much coverage as Ted Cruz, 16 times as much as Marco Rubio, and a staggering 40 times as much as Bush). We do well to decry the willingness of the press to allow their outlets to be manipulated by Trump. But the former reality TV star has also proven that money is not a substitute for marketing genius.

Money is important in politics. Candidates can’t campaign without it. But by now we’ve seen enough well-funded candidates crash and burn to understand that all it does is give politicians an opportunity for the voters to evaluate them and their message.

It would be naïve to suggest that the presence of money in politics doesn’t present opportunities for corruption. Many donors want something in exchange for their cash. The answer to that is more transparency not abolishing the one form of speech the founders were certain they were protecting with the First Amendment. But most donors are simply voting with their wallets in order to advance the ideas and the people they believe in. That goes for mega-donors like left-winger George Soros as readily as it does for right-wingers like the Koch brothers. The free market in speech that Citizens United helped open up also creates so much speech that it is hard to argue that any one donor or group of donors can dominate the national conversation.

Moreover, efforts to abolish the influence of money a different kind of corruption that allows media outlets the right to speech denied others. Shutting down political speech funded by contributions also benefits incumbents and powerful interests that have other ways of influencing government. The more speech, the freer the discourse and the more likely it is that the public will be able to make informed choices, even if we can’t guarantee outcomes that we like.

If Americans have learned anything from the disastrous impact of the campaign finance laws that were first passed in the wake of the Watergate scandal, it is that there is no way to get money out of politics. The more we try to ban, the further we drive it underground. And the more we ban speech, the more powerful interests win and the voters ultimately lose.

The cost of the 2016 election will likely be even more astronomical than the sums spent by Barack Obama and Mitt Romney in 2012. But raising money doesn’t guarantee a candidate any more than a hearing. The donors to the candidates will ensure that their standard bearers get their messages out. The American people will make up their own minds about who should be president. That is exactly the way it should be. Despite the neo-Marxian hysteria we hear about the influence of cash on democracy from candidates that are spending fortunes to pursue their own ambitions, the president can’t be bought. If you don’t believe me, just ask Jeb Bush. 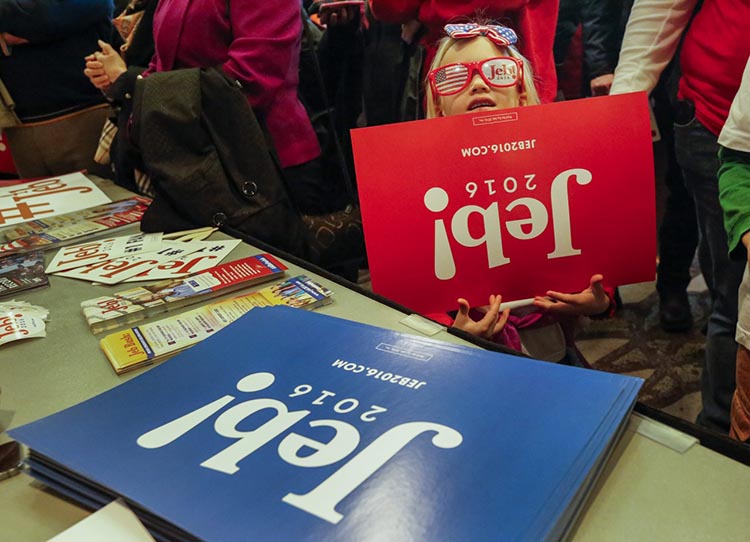