Last weekend’s White House Correspondents Dinner was the usual celebrity circus mixed with barbed humor. Unlike his predecessor George W. Bush, who was the subject of nasty attacks by comedians hosting the show, Barack Obama had no such worries. Moreover, with the help of his media team, he produced another genuinely humorous speech in which he skewered opponents. This one will be best remembered for the comic video in which he ponders his post presidential future. The video co-starred a former adversary who has already retired, former House Speaker John Boehner, who jokes with Obama about the pleasures of retirement and even tempts the president with a cigarette.

The segment was funny (though not as funny as the scene where a Department of Motor Vehicles official demanded Obama’s birth certificate in order to give him a license). But it prompted more than laughs. The next morning on “Meet the Press,” host Chuck Todd (who had a cameo of his own in “Couch Commander”) lamented, “Wait a minute. Where was that when America needed it?” The other members of his panel agreed, but they were wrong. The battles between Boehner and Obama over a host of issues including the confrontations that led to a government shutdown (which Boehner blames on his personal “Lucifer” — Ted Cruz) were difficult but the notion that this comedy video should be the model for our leaders is a mistake.

There is, of course, nothing wrong with Boehner being a good sport and playing a role in Obama’s video. But in recent years the complaint that Obama and Boehner should have learned from the example of President Ronald Reagan and his generally friendly adversary House Speaker Tip O’Neill is a bit misleading.

It’s true that the ability of the pair to relax and share a joke and a drink didn’t harm their working relationship. But if deals were made during that administration it wasn’t primarily because the two knew how to be civil. It was because both were able to agree on legislation that they viewed as in the common interest.

Friendly relations between a speaker and a president are not in fact necessary for deals to be struck. A decade after Reagan and O’Neill, President Bill Clinton and House Speaker Newt Gingrich were not buddies. But they were able to cooperate on landmark legislation like the Crime Bill and Welfare Reform even though Clinton and his wife now often act as if they are ashamed of these achievements.

So what was lacking between Boehner and Obama was not enough playtime (they’ll be able to golf, drink, and smoke with each other as much as they like in the future). What divided them were principles about the size of government. The enormous gap between the ideas of the White House and Congressional Republicans regarding the size of government, how to balance the budget, and ObamaCare, could never be bridged by mere conviviality.

It’s possible that more trust engendered by personal contacts could have created a compromise. But despite the White House’s success in convincing its liberal mainstream-media cheering section to buy its spin that the disconnect was entirely the fault of obstructionist Republicans, the real fly in the ointment was always as much the rigid liberal ideology of the president as the insistence of members of Boehner’s caucus that he not discard the conservative principles upon which they had been elected.

As our Pete Wehner correctly noted yesterday, the impulse to “fight dirty” and to want a candidate who would eviscerate an opponent is not consistent with the civic aspirations that are needed to live as citizens in a republic. Too many of our politicians have gone down the road of demonization of the other side and, comic sidebars notwithstanding, President Obama has been among the worst offenders on this score.

At the same time we should be wary of too much coziness between the leading members of both party establishments. One of the primary attributes of Washington in the era before the Gingrich-led revolution of the 1990s was a sense that elites of both parties were too much in business together. The great sorting out of Republicans and Democrats, in which ideology and principle began to play as big a role on Capitol Hill as log-rolling and going-along-to-get-along, was not the decidedly bad thing the “no labels” advocates of inter-party harmony represent it to be. There was a reason things had to change. If we sometimes go too far in the other direction, it is not an argument for a return to that previous era as much as it is a reminder that the great issues of the day should be settled by the voters in elections rather than behind their backs in backroom deals.

So while we should by all means laugh along with Boehner and Obama, let’s hope that their successors understand that the anger that produced Donald Trump and Bernie Sanders was not about too little establishment hand-holding but about too much. Parties and leaders should stand for something and if a president demands that Congress should surrender, there is nothing wrong with standing your ground on points of principle so long as you can do so with civility. 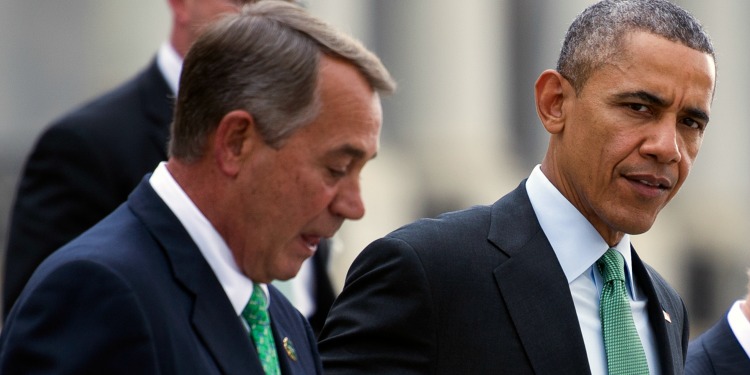