A little less than three years ago, Rand Paul was the toast of the Republican Party. His Senate filibuster about Obama administration drone policy caught the imagination of the country and injected some energy into a conservative movement, which was in the doldrums in the months after President Obama’s re-election. Even though most Republicans disagreed with his stance opposing the use of drone attacks and thought his speculation that the government would use them to take out U.S. citizens sitting in Starbucks was ridiculous, respect for his willingness to take on the administration was universal. Most Americans were war-weary after more than a decade of fighting in Iraq and Afghanistan. That meant Paul’s approach to foreign policy seemed popular even if he had trouble at times fending off accusations that it was more neo-isolationist than libertarian.

More to the point, the Kentucky senator seemed likely to be able to mount a serious campaign for the presidency in 2016. Most pundits assumed he would easily inherit his father Ron’s libertarian loyalists. A much more polished politician than his gadfly father, Rand’s ability to articulate mainstream positions on other issues and to work well with Senate leaders like fellow Kentuckian Mitch McConnell ensured that he would not be marginalized and could raise the money needed to pursue a first-tier candidacy. If he could combine the significant numbers of voters that Ron Paul attracted with Tea Party stalwarts that he was courting then it was not impossible to imagine him winning the Republican nomination.

But three years is a lifetime in politics. Today, as Senator Paul announced the suspension of his presidential campaign in the wake of his poor showing in Iowa, his candidacy stands as a classic example of how quickly the ground can collapse below a seemingly formidable political figure.

The first reason for the decline in Paul’s fortunes is that events rendered his foreign policy mindset out of step with the voters. In March 2013, Americans may have been thinking that a libertarian approach to the world in which the U.S. ceased involving itself in the fight against Islamist terror made sense. But after the rise of ISIS, the beheadings of Americans, and then the Paris and San Bernardino terror attacks, Paul’s desire to keep the U.S. out of the conflict marginalized him.

Paul was wrong to think that his attempt to pose as a “realist” on foreign policy rooted him in the mainstream of the Republican Party. This was always something of an illusion since even at the height of the libertarian moment in 2013, most conservatives still felt more comfortable with the traditional GOP foreign policy based on a strong America and support for our allies. But it was apparent by 2015, as Jamie Kirchik even pointed out in an article in COMMENTARY, “the GOP was still the party of foreign policy hawks.” Opposing all foreign aid and withdrawing the U.S. from the maelstrom in the Middle East was neither realistic nor supported by most conservatives.

But Paul’s problem wasn’t just that his views were obsolete. The intervention of two other Republican candidates destroyed his libertarian base as well as any hope of becoming the voice of the Tea Party.

In a far more crowded field than the one his father faced in 2012, Paul had plenty of competition for Tea Party voters. But the emergence of Ted Cruz destroyed his hopes in that sector. Whereas Paul had worked with Senate leaders like McConnell (even supporting the majority leader for re-election against a Tea Party insurgent), Cruz called him a liar on the floor of the Senate and pushed for a government shutdown that Paul opposed. In a year in which insurgents became fashionable, even an outlier like Paul was too Washington and too establishment when compared to Cruz.

Donald Trump’s candidacy brought even worse news for Rand. Trump’s popularity was driven by fear of immigration and terrorism that proved how marginal Paul’s libertarian views had become. But in a touch of irony, it turns out that a lot of the people that liked Ron Paul have embraced Trump because, like the old libertarian, the real estate mogul is the candidate who best exemplifies the mindset of his voters in terms of their disgust with conventional politics. Though his statist views are the opposite of those of the elder Paul, he is also clearly the candidate that appeals to the sort of extremists who loved the senator’s father.

In the end, Rand was only left with a fraction of the support Ron got in 2012. As Tea Partiers and other more fringe voters flocked to Cruz and Trump, Rand was left with only the libertarian true believers. That was good enough for only 4.5 percent in the Iowa Caucus. That is a stunning result when compared to the 21.5 percent Ron Paul got when finishing third behind Rick Santorum and Mitt Romney. With the prospect of an equally dismal showing in New Hampshire next week and running out of money, Paul called it quits.

The lessons here are obvious.

The first is that any assumptions about presidential contests that are made in the aftermath of the previous election are worthless. The Republican Party appeared ripe for the taking by the Paul movement after Obama’s re-election. But politics is not only not science; it’s also not static. Rand might have been a compelling presidential candidate in 2013 but by 2016, he was as much yesterday’s news as Romney and Santorum. That’s something the political class should keep in mind later this year when they start planning for 2020 even before the 2016 cycle is completed.

The second is that the notion that Republicans or conservatives can be seduced by libertarian or isolationist foreign policy views is a mistake. Though many on the right sympathize with Paul’s distrust of government and respect his devotion to constitutional principles, there really isn’t much room for his point of view on war and peace issues in his own party. At the GOP debates, he was an outlier on terrorism and the need for the government to use all the tools at its disposal in that fight. As much as he fits in with other Republicans on domestic issues, on foreign policy Paul was always to the left even of President Obama and Hillary Clinton and very much in tune with Bernie Sanders.

Though we can’t know which issues and events will define future presidential campaigns, Rand Paul’s fall from the mainstream to the margins in just three years should remind pundits that some elements of our political world are not so easily changed. While the liberal base of the Democrats may be seduced by isolationism if couched in the language of the left, the GOP remains the party of a strong America. The isolationist moment is over and is not likely to return in the foreseeable future. 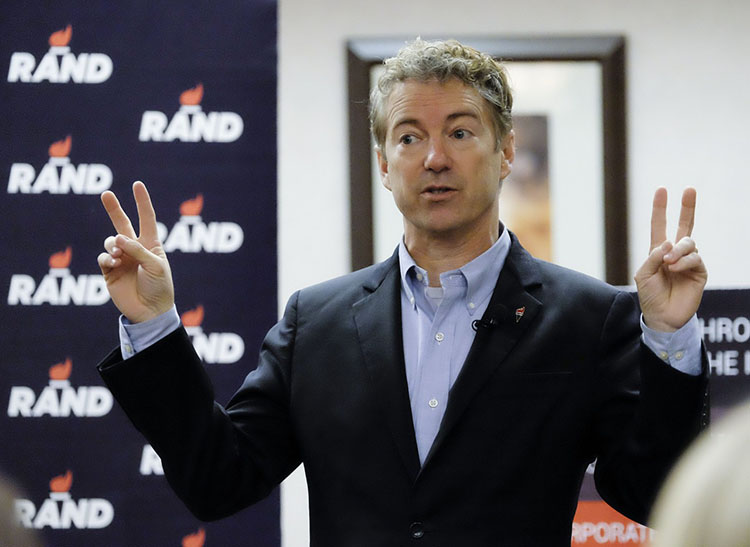