Those who wish to rationalize or apologize for those involved in the BDS — boycott, divest and sanction — movement against Israel have sought to depict it as a principled effort that is rooted in a concern for human rights. Even those liberal critics of BDS like writer Peter Beinart have called for welcoming young Jews who are supporters of BDS and even members of groups like Students for Justice in Palestine into Jewish communal groups and events. He depicted such people as “hearing the voice of Sinai” — a metaphor for a vision of Jewish values and law — albeit in a different, if upsetting manner. Just as he denies that anti-Zionism is anti-Semitism, Beinart and other liberals who agree with him allege that however upsetting BDS may be, it is primarily motivated by Israeli policies rather than hate.

This claim has been undermined by the anti-Semitic statements and behavior that has been employed by BDS advocates on American college campuses. But yesterday we learned of another link between BDS and hate. In testimony before the U.S. House of Representatives Subcommittee on Terrorism, Nonproliferation, and Trade, the Foundation for the Defense of Democracies’ Jonathan Schanzer presented evidence of a troubling link between a main source of funding for BDS and the terrorist Hamas movement.

As Schanzer explained, his group traced what happened to employees of three now-defunct non-profit groups that were implicated by the federal government in support for terrorism. The three, the Holy Land Foundation, the Kind Hearts Foundation for Humanitarian Development and the Islamic Association for Palestine were involved in raising money for Hamas in the United States. But while the Treasury Department shut these Hamas fundraisers down, that still leaves open the question of what happened to those involved with these groups. According to Schanzer, seven key figures in raising money for Hamas are now associated with a new organization called American Muslims for Palestine.

Schanzer told members of Congress that the latter is “arguably the leading BDS organization in the U.S., a key sponsor of the anti-Israel campus network known as Students for Justice in Palestine.” The organization, he said, provides money, speakers, training and even “apartheid walls” to SJP activists on campus, for the annual Israel Apartheid Week events.

While the activity of American Muslims for Palestine is advocacy, not terror funding, Schanzer is right when he says, “Americans have a right to know who is leading the BDS campaign and so do the students who may not be aware of AMP’s leaders or their goals.”

As I’ve noted previously, the reason why BDS activists are so prone to anti-Semitic invective is that the passion that animates the pro-Palestinian cause around the world feeds off traditional anti-Semitic tropes about Jews. Without that anti-Semitic fervor injecting its passion into anti-Zionism, the BDS crowd would not have the kind of reach or power it has demonstrated.

But we should also pay attention to the fact that, as Schanzer makes clear, there are fewer than six degrees of separation between those who advocate for economic war on Israel via BDS and those who back Hamas’s terror war against the Jewish people.

Let’s concede, as Schanzer does, that American students who cheer the efforts of Students for Justice in Palestine and support BDS campaigns do not think of themselves as being Hamas auxiliaries. But they ought to wonder about the fact that their efforts are often being funded by a group staffed by veteran Islamists who support Hamas’ platform that aims at not merely destroying the state of Israel but massacring its population.

The idea that BDS is motivated by human rights concerns or a desire to end the “occupation” of the West Bank is taken as a given by its apologists. But it should be remembered that Hamas and that group’s Palestinian Authority rivals consider all of Israel, even inside the 1967 lines, as being “occupied” territory — a point that even PA leader Mahmoud Abbas made recently. Some left-wing Jews think that the point of BDS or even groups that support it such as Jewish Voices for Peace is to save Israel from itself. But their Palestinian partners, both in the Middle East and here in the United States, clearly have very different motives and goals.

Were a desire for statehood the principle motive of Palestinian nationalists the conflict would have ended 15 years ago after the first of several offers of independence were made to the Palestinian Authority by Israel. Nor are they primarily motivated by a desire to eliminate settlements in areas Israel took over after June 1967 since the withdrawal from Gaza in 2005 — where an independent state in all but name run by terrorists now exists — has done nothing to convince Palestinians to try to trade peace for land.

Even if we were to ignore the evidence that those funding Students for Justice in Palestine are the same people that were raising funds for Hamas before being closed down by the U.S. government, we need to also recognize that the at the bottom of their ideology is bias against Jews. The BDS movement isn’t merely economic warfare; it is an effort to delegitimize the entire notion of Zionism and the right of the Jewish people to sovereignty or self-defense in their ancient homeland. Since this is something that no one thinks to deny to any people other than Jews, it is necessary for those who treat their efforts as a benign protest to confront the hate at its core.

The problem with BDS isn’t who funds it so much as the fact that it remains a cause in service to hate. It is wrong not because of its associations but because, like Hamas, it’s purpose is to work for Israel’s destruction and the dispossession of its people. This is a fact that BDS supporters and fellow travelers ignore at the loss of their own integrity. The one degree of separation between Hamas and BDS is just one more piece of evidence of the malevolence of a cause that pretends to be about human rights but which actually serves as a front for blood-soaked terrorists that hate Jews. 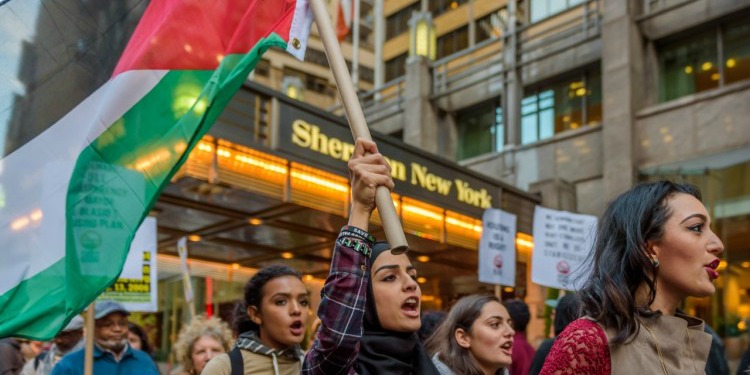