The problems kept piling up for the Hillary Clinton campaign on the eve of what is anticipated to be a victory for Bernie Sanders in the New Hampshire primary. Forget the worries about the ongoing FBI investigation of her mishandling of classified material while she was secretary of state. She had enough trouble dealing with the negative feedback about playing the gender card with Gloria Steinem basically saying the young women who are flocking to Sanders are chasing men and Madeleine Albright consigned them all to hell. Bill Clinton provoked more ridicule by claiming that Sanders supporters were being sexist and profane when they taunted Hillary and her backers on the Internet. Then came the rumors about a campaign shakeup in the offing after New Hampshire since the former president and First Lady were unhappy with their staff’s performance.

Given their chagrin at the difficulties Hillary is encountering facing off against a 74-year-old socialist that not even many of his supporters can envision as president, that may be an understandable reaction. But given that almost all of her problems have been the result of her poor performance and personal trust issues, it’s fair to say that the problem is in the mirror, not the consultants.

So with problems piling up, it was not surprising that former New York City Mayor Michael Bloomberg was still trying to pump up interest in a putative third party candidacy yesterday. Two weeks after the New York Times first broke the story about Bloomberg’s preparations for a presidential run, the would-be candidate personally confirmed the story for the first time in an interview with The Financial Times. His aides then told the Times that after New Hampshire votes, another round of polling would be conducted as the billionaire’s deliberations “enter a decisive phase.”

Bloomberg’s dipping his toe into the waters at this moment is no coincidence. He knows that the theoretical opening for a third party candidacy is if the Democrats nominate Sanders while the Republicans choose Donald Trump or perhaps Ted Cruz. With New Hampshire about to hand victories to Sanders and Trump, the aftermath of the primary will probably be the ideal time to ramp up the Bloomberg effort.

Is he serious? If as reports indicate, he’s assembling a team and spending money on polling, this trial balloon must be considered to be more than a rumor. Moreover, he’s convinced at least a few serious people not already on his payroll that he can actually win in the event that the two major parties choose candidates that are perceived to be outliers or extremists. Doug Schoen wrote as much in the Wall Street Journal and the Washington Post’s Fix column conceded that the vagueness of his appeal might play to his advantage even if they are skeptical about the whole thing.

Skepticism is very much in order. As I noted last month, it’s hard to believe a smart businessman like Bloomberg would be willing to waste massive amounts of money (a least a billion dollars would probably be needed to mount a 50-state effort) on an effort that is almost certainly destined to fail. Our political system is not set up to give third parties much of a chance. Though he claims he can attract disaffected voters from both parties, it’s hard to see how a fanatical anti-gun, global warming activist who is the leading proponent of not merely big government but nanny government (Big Gulp anyone?) could sound attractive to anyone but liberals. His presence on the ballot in blue and purple states would be a disaster for the Democrats, who would already be in big trouble if they were really prepared to tie their fate to Sanders. Which is, I might add, something that I don’t believe will ever happen thanks to Democrat super delegates.

But the mere fact that Bloomberg is continuing to try to pump air into his trial balloon this close to November is yet another sign of Clinton’s weakness.

I continue to insist that nothing short of a well timed and richly deserved federal indictment will stop her from being the Democratic presidential candidate. But the panic Bloomberg is sensing in the party’s establishment is real. The longer Sanders hangs around — and there’s no doubt that he will remain in the race all the way through the primaries — the more uncomfortable Clinton will get as she continues to lurch left in order to stay viable with the Democratic base. And that means there will be a lot more bad days as we learn more about her ties with Wall Street as a Politico story about the content of her highly-paid talks to Goldman Sachs indicates.

Even if Sanders can’t win the nomination and keep Bloomberg’s fantasy of a centrist independent winning the election alive, he is weakening Clinton every day. Under those circumstances, the hopes for a huge turnout of minorities and young voters that elected Obama twice seems a stretch.

So while the Bloomberg boomlet still seems to be more of a rich man’s fantasy than anything else, it is one more measure of the seriousness of the Democratic frontrunner’s problems. 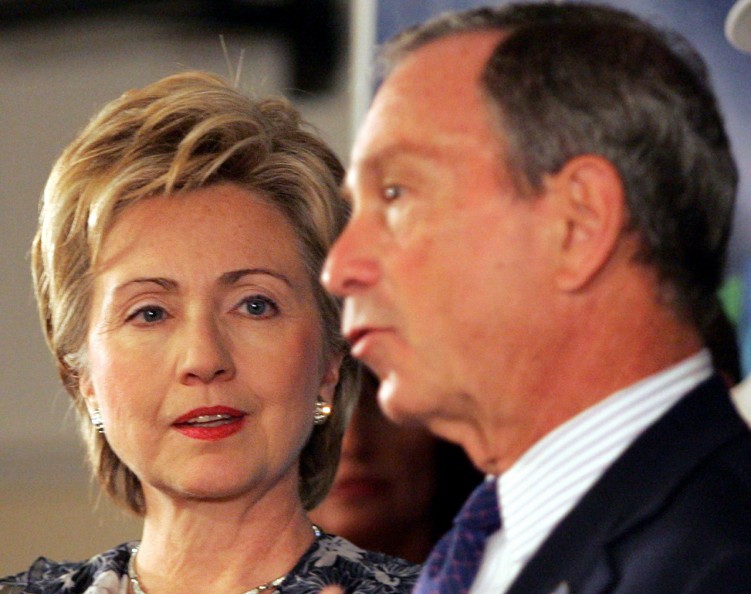