Last night’s Republican presidential debate had its memorable moments but, as I noted yesterday, in the absence of a catastrophic gaffe by one of the candidates, it’s not likely that it will have a decisive impact on the race. But that is not to say nothing of interest happened. Chris Christie’s strong performance after being promoted back into the main debate may not elevate him to the first tier of candidates in national polls, but it does have the potential to fatally complicate any hopes of a Republican not named Donald Trump or Ted Cruz to win the nomination

As our John Podhoretz noted in the New York Post, America’s post-San Bernardino focus on terror has provided Christie with a moment to match his qualifications. The New Jersey governor’s ability to talk tough and speak from his experience as a federal prosecutor wouldn’t mean much in an election where foreign policy was a sidebar. But thanks to President Obama’s fumbling of the situation in Iraq and Syria and the rise of ISIS, Christie’s main talking points are exactly what a lot of Republicans want and need to hear.

Moreover, Christie’s pugnacious personality, which can wear thin on the national campaign trail, also seems suited for the moment as he proved when he easily brushed aside a question from a Facebook user during the debate. A less brash candidate might have wasted time trying to prove their humanity when pressed about being kind to refugees. Instead, Christie went straight to the heart of the matter and knocked the question out of the park with no worries about being sensitive.

Christie’s great skill at retail politics is also paying off with improving New Hampshire poll numbers (he’s currently in third place in the Real Clear Politics average of polls with Trump in first and Marco Rubio second) that might, as the first primary draws near, improve even more. A strong showing in the Granite State will keep Christie’s campaign alive and give him a chance and perhaps the money to find other states where less conservative voters can determine the outcome.

Christie may be taking shots at Donald Trump and Ted Cruz and occasionally even admitting that he agrees with Rubio on some issues, but the Florida senator is the one he’s really running against. The Republican race is shaping up as three separate contests. One is for the outsider vote that Donald Trump is already winning in a landslide. Then there’s the conservative Christian/Tea Party wing of the party that Ted Cruz is leading. Then there is the so-called moderate lane where Rubio, Christie, Jeb Bush, John Kasich, and perhaps Carly Fiorina are seeking to get a ticket to the finals.

Calling these candidates “moderates” is a bit of a misnomer. All of them are, by any reasonable definitions, very conservative politicians. But in today’s Republican Party, where possessing extreme views about immigration seems to be the way the radio entertainment win, moderation is a relative term. But no matter what label you want to put on them, this group is competing against each other.

The advantage that Trump and Cruz seem to have over anyone from the moderate wing now is that their competition is clearly fading. Ben Carson had a moment when he seemed to eclipse Trump, but that has passed and the betting here is that by the time Iowa and New Hampshire votes, he will be completely marginalized. Meanwhile, Cruz’s competition for religious conservatives has either dropped out (Scott Walker, Rick Perry and Bobby Jindal) or in such bad shape that they are relegated to the preliminary debates rather than the main stage (Mike Huckabee and Rick Santorum).

But it appears that rather than being clarified and winnowed, the field of moderates is getting more complicated. Rubio is clearly ahead among this group but a surge for Christie — especially in New Hampshire where more conservative Republicans do not outnumber such voters. With Jeb Bush still in the mix due to the enormous amount of money he was able to raise early on in the race when he was still considered a frontrunner and Kasich and Fiorina also plugging away, right now it’s difficult to see how any one of them will be able to break out and actually win the state from Trump. Moreover, if more than one moderate gets their ticket punched as serious contender coming out of New Hampshire that may fatally undermine Rubio, the candidate most observers assume is the one with the best chance of snagging the nomination and winning the general election since he has by far the best record in head-to-head poll matchups with Hillary Clinton.

The math is unavoidable. If Christie is competing with Rubio on an even playing field after New Hampshire and Bush is still in denial about his failed candidacy and hoping to revive it in Florida, none of them are going to be able to stop either Trump or Cruz.

Despite being subjected to more criticism from his rivals than even Trump was last night, Rubio still held his own and proved once again he’s the best debater in the field. But so long as he is locked in a tough competition for the moderate wing, it’s hard to see where he starts winning primaries and demonstrating that Trump and Cruz still don’t speak for the majority of Republicans. Ending the moderate logjam may be the party’s best hope to stop either Trump or Cruz and to salvage what ought to be a strong chance to beat Clinton and the Democrats next November. 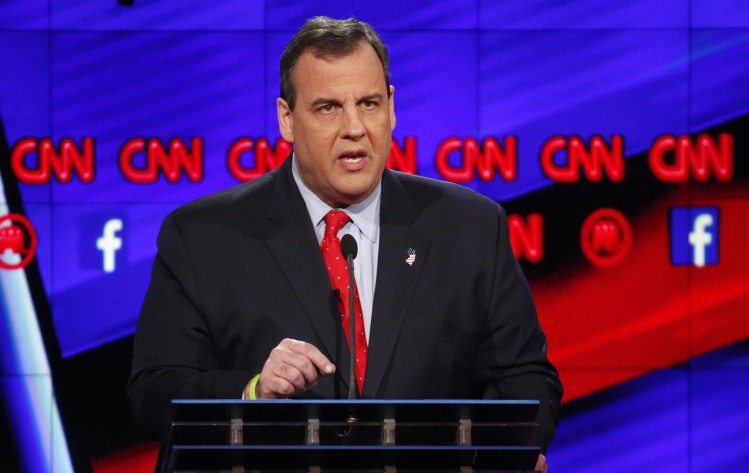