Israeli Prime Minister Benjamin Netanyahu is used to hostile receptions at the United Nations. But today he was able to use the animus toward the Jewish state on the part of the overwhelming majority of member states to good use. At one point during his address to the UN General Assembly, he pointed out that only 70 years after the Holocaust, Iran was repeatedly threatening the Jewish state with annihilation. But “the response from nearly every one of the governments represented here, has been absolutely nothing. Utter silence. Deafening silence.” And what was the response from those delegations that were not boycotting his speech: the same silence that he had just referenced. Netanyahu stood at the podium for what may have been the most agonizing 44 seconds in the history of such addresses at the UN. That truly deafening silence told us everything we need to know about the international community and its indifference toward efforts to annihilate Israel. He followed the silence by stating the obvious:

Perhaps you can now understand why Israel is not joining you in celebrating this deal. If Iran’s rulers were working to destroy your country, perhaps you’d be less enthusiastic about the deal.

Perhaps the loudest silence during Netanyahu’s remarks about the Iran nuclear deal that he correctly noted was being celebrated by the UN came from the U.S. delegation. President Obama had used his speech to the same body on Monday to take a bow for having signed the pact and then preventing it from being stopped by Congress in spite of majorities opposing it in both houses of Congress and the American public. So the Americans present sat on their hands when Netanyahu pointed out that Iran is still set on opposing U.S. interests, spreading terror and working toward regional hegemony, topics that the president conspicuously avoided in his speech.

Some observers had predicted that Netanyahu would downplay differences with the United States in his speech as part of an effort to rebuild the alliance that was shaken by the American decision to embrace détente with Iran. Netanyahu did note that the two countries were largely in agreement on most issues and that any arguments between them were nothing more than a family quarrels. But his unwillingness to shy away from the key differences between the two governments showed that he had no illusions that the last 16 months of the Obama administration would be any different from the first 80. Faced with a president that is determined to open up as much daylight as possible between the two allies, Netanyahu felt he had no choice but to show the world that Israel was not daunted by its minority status or even the way the world body continues to discriminate against it. Barring some unforeseen event, Netanyahu will still be in office when Obama leaves the White House. If the Israelis believe that repairing the alliance will have to be postponed until a new president is chosen, they are probably right.

Netanyahu’s confidence that Israel can afford to wait until Obama retires was probably bolstered by the fact that Obama omitted any mention of the Palestinians and the peace process in his speech on Monday. Every previous Obama address to the UN had always prominently mentioned his desire for a two-state solution and the need for Israel to take risks for peace. But faced with a dead-in the-water peace process and far more urgent problems like Syria, ISIS, and the Russian entry into the wars of the Middle East, he was wise to ignore an issue that has no chance of being resolved in the foreseeable future.

But Netanyahu shouldn’t be too confident.

Palestinian Authority leader Mahmoud Abbas’s supposed bombshell in his speech to the UN yesterday was a flop. No one, not even his own people, took his threat to end the Oslo process and for his government to walk away from its commitments seriously. The stunt was, as I noted yesterday, a transparent bluff since Abbas benefits more from economic, political, and security cooperation with the Jewish state than the Israelis do from cooperating with the Palestinian Authority. Without it, his Fatah Party would fear being kicked out of the West Bank by a popular Hamas coup just as they were in Gaza in 2007. Nothing will change on the ground as result of his speech. The gesture was merely part of an effort to pressure the UN, and the United States, in particular, to recognize an independent Palestinian state without first making peace with Israel.

The jury is out as to whether Obama will be so foolish as to fall for this ploy, but even though the Americans and even Netanyahu’s hostile audience at the General Assembly know Abbas is bluffing, they may not be able to pass up any opportunity to attack Israel.

It must be understood that the problem Israel faces isn’t a function of hostility to Netanyahu or even a product of the fractured relationship between the prime minister and Obama. As Netanyahu noted, in just the last year the UN passed 20 resolutions unfairly condemning Israel and only one noting the catastrophe in Syria. That tells us everything we need to know about the way traditional anti-Semitism has morphed into an ideology that masquerades as mere criticism of Israel or open anti-Zionism.

Though few may believe Abbas’s threats, Israelis must take the willingness of the international community to listen to and to even applaud the lies he spread about Israel and the peace process. The Palestinians killed Oslo 15 years ago when they answered an Israeli peace offer of statehood with a terrorist war of attrition. Abbas and other so-called moderates continue to refuse to recognize the legitimacy of a Jewish state no matter where its borders might be drawn. But still the Obama administration and the UN majority continue to blame the Israelis for the failure to craft a peace treaty that the Palestinians have no interest in ever signing.

Netanyahu was right. At the heart of all of Israel’s international diplomacy problems is a deafening silence about the threats to Jewish existence and the determination of Islamist forces to make good on those pledges via terror and possibly even nuclear weapons. The root of that silence isn’t dissatisfaction with Netanyahu, anger about Israeli settlements or even sympathy for the Palestinians or Iran. The silence begins and ends with hatred of Jews. Until the UN is cured of this malady and its halls cease to be a cesspool of prejudice, the silence will continue. 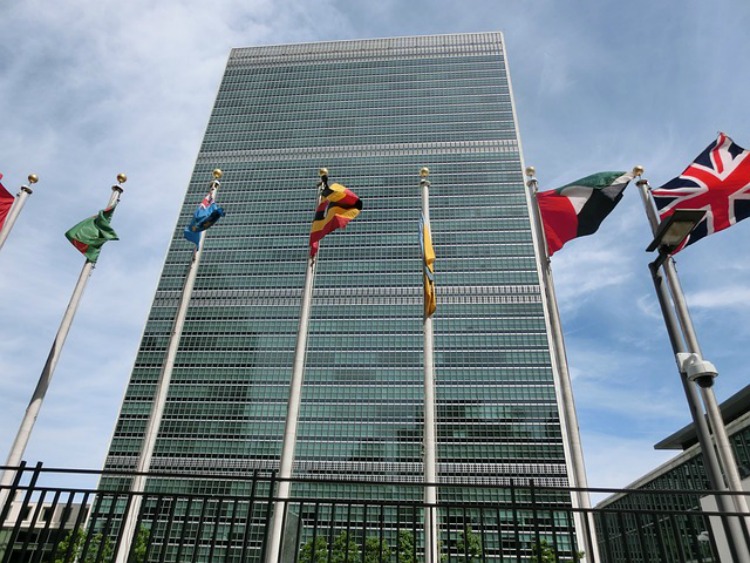