There is good reason to lament the fact that the death of Supreme Court Justice Antonin Scalia will be the cause of an escalation of partisan warfare to nuclear levels.  If a presidential election wasn’t enough to divide the country along political lines, the looming conflict over the administration’s attempt to replace Scalia will raise the nation’s temperature to a fever pitch. The spectacle of a confirmation fight that will determine whether liberals or conservatives control the court for what might be a generation would have been political dynamite no matter when it occurred. But for it to happen now in President Obama’s last year as the parties prepare to fight it out to determine his successor creates the setting for a historic confrontation. But none of this excuses the hypocrisy we’re hearing and will continue to get from Democrats about what is about to unfold.

Democrats and their cheering section in the mainstream media are saying now that it is the president’s constitutional duty to nominate a successor to Scalia and that the Senate has an equal duty to act on that choice. They are right on both counts. But the insistence on everyone doing their job and respecting the Constitution is more than a bit rich.

Article 2, Section 2 of the U.S. Constitution says that the president shall appoint judges of the Supreme Court with the Advice and Consent of the U.S. Senate. That means those Republicans that are calling for the president to refrain from making a nomination are out of bounds. The president has every right to make such a nomination even on his last day in office. But the notion that the Senate is obligated to approve this nomination is absurd. Advice and consent means that they have the right to turn his nominee down.

While some liberals concede that last point, they think it is outrageous that Senate Majority Leader Mitch McConnell has already made it clear that no one the president nominates will be approved. They think the president’s nominee deserves a hearing and a vote up or down. And that might have been what would have happened in an earlier era when the Supreme Court confirmation process was strictly about the nominee’s qualifications or his ethics. But the boat sailed on that non-partisan approach to the Court when Democrats invented a verb when they trashed the highly qualified by very conservative Robert Bork when President Reagan nominated him to the Supreme Court in 1987. The creation of a “borking” process changed the Court forever and ensured that all future court nominations would hinge on ideology more than anything else. The days of nearly unanimous approvals of judges — as was the case when Scalia was confirmed in 1986 — are over.

Since then many judicial nominations – including many of those appointed to lower federal courts by George W. Bush during his last two years in office when he was forced to deal with a Democratic-controlled Senate — were stalled by Senate filibusters and never got the kind of up or down vote the Democrats now demand for Obama’s nominee.

Nor, I might add are Senate Democrats always so punctilious about allowing votes about other important matters. In September 2015, 42 Senate Democrats voted to filibuster the approval process for the Iran nuclear deal. Even though all of them had voted for the bill that created that upside down treaty ratification process (which allowed Obama’s deal to sneak through Congress with one-third plus one vote rather than the two-thirds approval required by the Constitution) that gave them the right to vote on it, they denied the Senate that privilege. They cared nothing for the Constitutional niceties then.

The same applies to Democrat support for President Obama’s executive orders on immigration that sought to make an end run around the constitutional legislative process. It is Congress that has the right to make laws. The notion that the president should give himself the right to enact new laws by fiat if, as he says, the Congress fails to do his bidding, is the stuff of monarchy, not the rule of law as defined by the Constitution.

All of which is to say Democrats and liberals should spare us the pious sermons about respecting the Constitution.

Everyone in the country with even a passing understanding of what is happening also knows that this is the sort of issue on which the parties’ positions are determined by their political interests and nothing else. If it were a Republican president in his last year of office seeking to replace a liberal with a conservative, does anyone think for a minute that a Senate controlled by the Democrats would let that happen? Or that it would then be the GOP that would be whining about their choice being denied a vote.

As has been the case throughout the battles between Congressional Republicans and the White House during the administration, both sides are digging in their heels and demanding to get their way. The only difference is that Democrats have always been able, with the help of their allies in the media, to label their opponents as obstructionists even though President Obama has been every bit as obdurate as his GOP antagonists.

It may be frustrating for the president that the Republican Senate has the ability to thwart him but as he liked to say after his victories in 2008 and 2012, elections have consequences. The American people have given us a divided government and it is no more reasonable for Democrats to expect a Republican Senate to allow the Supreme Court to be flipped from a 5-4 conservative to a 5-4 liberal majority than it would be if the shoe were on the other foot.

Three decades after Bork and only months after their Iran deal maneuver, it is a little late in the day for Democrats to start revising history. Moreover, for all of President Obama’s laments about increased partisanship, he needs to understand that his hypocrisy on the issue is adding to the problem. If the president really wanted to heal the nation rather than heighten and exploit divisions, he would rein in his supporters and agree that the future of the court ought to be decided at the ballot box rather than by Senate maneuvers. Pious speeches about obstructionists will heat up the party bases but do nothing to make it easier for the next president and Congress to govern. This fall Americans will have a chance to vote for a president and a Congress that will have to select the judge who will break the tie on the Supreme Court. That is as it should be. Any arguments to the contrary are mere partisan hypocrisy and should be ignored by the voters. 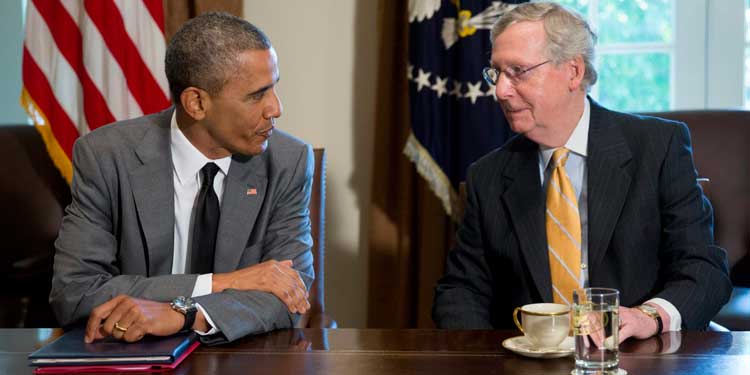