President Obama has never wanted to get involved with the conflict in Syria. He passed on taking action early in the civil war, back in 2011, when relative moderates might have toppled Bashar al-Assad’s regime and averted the horrors that followed. In 2012, he told Assad that any use of chemical weapons against his people would trigger U.S. action but punted in 2013 when the butcher of Damascus did just that. Since then, Obama has acquiesced to Russia and Iranian intervention in the Syrian conflict that all but ensured Assad’s survival despite repeated calls by the president for his ouster. Even after he pledged to wage war against ISIS, a group that controls much of that tortured country, Obama has fought it on the cheap without any real plan for victory.

The situation has deteriorated to the point where 51 U.S. diplomats have signed a letter calling on the White House to use force against Assad in order to halt the slaughter and the flow of refugees, so Obama has now come up with an answer for his critics. And it’s worse than even they might have imagined.

The president’s solution for Syria is to trust that Russia can solve the West’s problems.

As Josh Rogin reported in yesterday’s Washington Post, the administration has offered a deal to Russia. The proposed agreement will have the U.S. will expand military cooperation with Moscow’s forces in Syria against Jabhat al-Nusra, al-Qaeda’s Syrian affiliate, in exchange for a Russian promise. Russia is supposed to persuade its client Assad to stop bombing the rebel forces in his country the U.S. favors and thus presumably lessen the ongoing humanitarian disaster in the country.

That makes sense if Obama’s sole objective is to avoid decisive U.S. action and is ready to further legitimize Russia’s role in helping Assad and his Iranian and Hezbollah allies massacre opponents. The president and Secretary of State Kerry (whom Rogin’s sources identify as a strong supporter of the idea while Defense Secretary Ash Carter opposes it) are so desperate for more Russian help against ISIS that they have clearly given up on getting rid of Assad or on increasing arms supplies for the rebels the West supports.

What does the U.S. get out of this?

If the Russians keep their word, it will lessen casualties in the war and perhaps help preserve a cease-fire that has generally been observed in the breach. It would also lessen pressure on the White House to do something and theoretically bring more Russian support for the dead-in-the-water Syrian peace process Kerry has championed.

Even so, the big winners are the Russians and Assad, the war criminal of the decade. As Rogin pointed out, the White House is clearly giving up on resolving the conflict in Syria or ousting Assad while essentially abandoning the Syrian rebels who have looked to the West for help as Damascus and its allies have laid waste to the country.

While Assad will benefit from Obama’s choice, so will ISIS. Sunni support for the group has always rested on the notion that the Islamist group is that population’s defender against the ruling minority Alawites in the Assad regime and its Shiite allies. Both Assad and the Russians have always been more interested in fighting the rebels the West supports than in interfering with ISIS, and it’s unlikely that will change. As Rogin also pointed out, if, as is entirely likely, Russia doesn’t keep its end of the bargain, the situation will be even worse. The U.S. will have given the Russians and Assad assistance in subduing more of the country, something that will only bolster support for radical Islamists. As those courageous U.S. diplomats made clear, U.S. bombing alone won’t defeat ISIS. But the West helping Assad is the best recruiting tool ISIS can get.

Let’s concede the U.S. has never had any really good choices in Syria. Even so, Obama’s decisions have only contributed to the carnage, helped midwife ISIS, and enabled the Putin regime to become a far more dangerous player in an already unstable Middle East. Having persuaded himself that further American action was the worst possible option, Obama has stood by while ISIS has grown and has let a brutal Assad government kill hundreds of thousands and drive millions of people out of Syria, who have become a problem for all of the region and Europe. If that wasn’t bad enough, he has now agreed to a situation where Russia is openly arming Hezbollah terrorists. Indeed, ten years after the Second Lebanon War, Obama’s green light to Russian and Iranian intervention in Syria has resulted in Hezbollah becoming a full-fledged army.

This deal might be a way for the president to slink out of the White House without having to do more to resolve the Syrian crisis. But it is also a horribly fitting end to years of mistakes and cowardice. When the history of the Syrian civil war is written, there will be plenty of villains and plenty of blame to go around. But by choosing cowardice and placing his trust in Putin, President Obama has earned his share of infamy and then some. 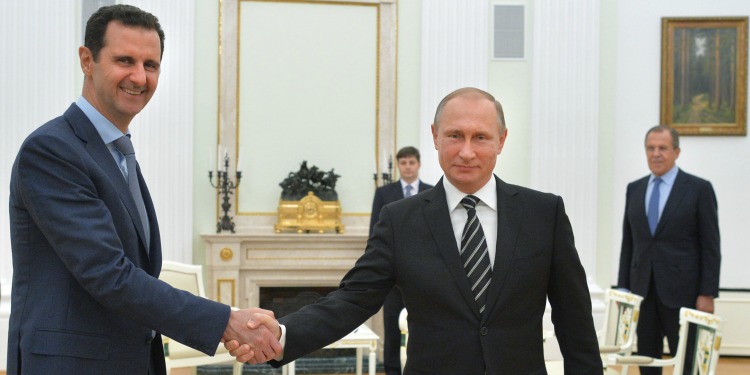