Secretary of State John Kerry’s announcement this week that we may be only days away from implementation of the Iran nuclear deal was expected. Last month, the State Department coordinator for implementation of the agreement told the Senate that the U.S. was looking to lift sanctions as early as January even though Kerry told Congress last year that the earliest that would happen would be the Spring of 2016. But since Iran appears to be complying with some of the minimal demands contained in the deal, the administration is proceeding with must be considered indecent haste to declare success and begin ending the sanctions. For the president and Kerry the deal is an end unto itself and any other issue concerning Iran, no matter how serious, must be considered irrelevant and not be allowed to delay, let alone, halt the consummation of what they consider to be a diplomatic triumph. Yet even without rehearsing the powerful arguments that make it painfully obvious that the deal is a disaster, there are good reasons for delay.

Let’s start by pointing out that nothing in the deal requires the administration to rush to lift sanctions. They can easily wait for a few months to make absolutely sure that the restrictions put into place on Iran’s program have been observed. Moreover, any lifting of sanctions before the inspections regime has been tried out and seen to be, at least on the surface, a success, seems premature at best.

Moreover, even a slight delay before the West allows a business gold rush in Tehran to start gives it a bit of leverage on other issues.

In the last few months, Iran has flouted United Nations Security Council resolutions restricting the testing of ballistic missiles. This is a clearly a test of Western resolve and one that, at least so far, President Obama has flunked. Though the U.S. would clearly like the Iranians to cease producing and testing missiles that are the delivery systems for the nuclear weapons Tehran says it doesn’t want, the president hasn’t acted like he means business on the issue. After months of not doing a thing about this provocation, the U.S. said it was about to implement sanctions over the missiles but then quickly rescinded the threat, putting any punishment on Iran on hold indefinitely.

Iran also continues to hold a number of U.S. hostages. Four Americans are held in the country on bogus charges. Most prominently, Washington Post reporter Jason Rezaiian has been convicted and now sentenced on completely false accusations of espionage. Had the president or Kerry, an ounce of self-respect or any skill in negotiating, their release should have been part of the initial agreement.

There is also the issue of terrorism. Iran continues to funnel cash and weapons to both Hezbollah and Hamas as well as to support Houthi rebels in Yemen. This, too, might have been part of the nuclear deal, but the administration bailed on this issue too so why should we expect things to be different now?

The answer is that the crisis between Saudi Arabia and Iran has put new pressure on Tehran that ought to be exploited.

As both our Max Boot and Michael Rubin have written, there are no good guys in the conflict between these two dictatorial and repressive regimes. But by standing up to Iran, albeit with unnecessary executions of Shia dissidents, Saudi Arabia seems to be sending a signal that Iran’s push for regional hegemony won’t be accepted by the Sunni states. Iran has acted as if it is control of events in Iraq and Syria and thinks it holds the whip hand over the U.S. in both the nuclear negotiations and the struggle against ISIS. But this turmoil would, in the hands of a president that was not besotted with the idea of détente with Iran, be turned into leverage that might compel the regime to be more amenable to U.S. demands on missiles, hostages and terror.

Though the West has acted for the past few years as if it was the supplicant rather than the party that held Iran’s economic fate in its hand, it still has the ability to tighten the noose on Tehran in a way that might compel the ayatollahs to start behaving. Instead of rushing to give Iran a gift in the form of sanctions relief in the hope that it might be helpful on ISIS, this would actually be the ideal moment to remind them that the U.S. is not without friends or resources. A freeze on implementation would not increase a nuclear peril from Iran that is, after all, only being kicked down the can by the deal for a decade. But for a change it might pry some concessions out of them that would make the region and the world a little bit safer. At the very least, Kerry should demand that the U.S. be paid for any sanctions gifts in the form of immediate freedom for American hostages.

Congress is right to take up legislation imposing new sanctions on Iran unless it cleans up its act on missiles and terrorism. But since we know that the president will veto any such bill, and the Democrats will sustain it, this is an empty though informative exercise. Until a new president with a tougher stance on Iran is sworn in, it will be up to Obama and Kerry to guard U.S. interests and security. It’s hard to imagine them reversing course and to start standing up to Iran’s blackmail. But it’s not too late to do so if they want to try. 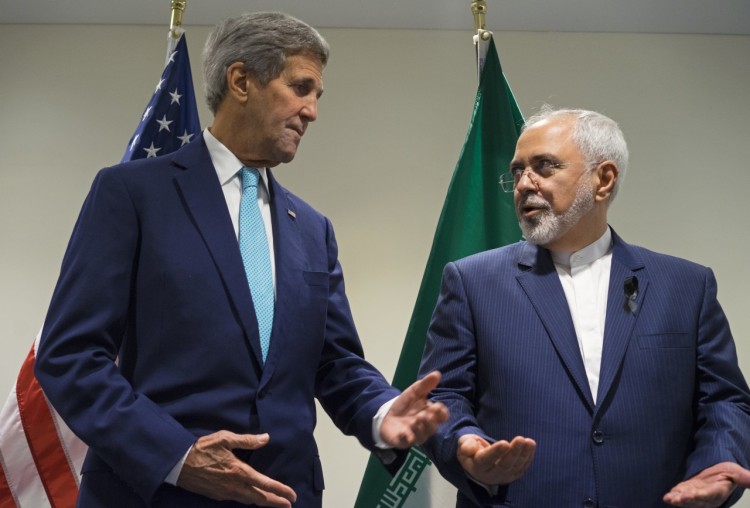