It’s easy to sympathize with President Obama’s unwillingness to let the Brussels terror attack change his schedule. If presidents allowed crises to stop them from doing anything other than sitting in the White House situation room, their activities would be extremely limited. But the controversy this week about the president’s decision to stick with his trip to Cuba and then Argentina is about more than bad messaging. What we witnessed this week was not a commander-in-chief with a communications problem. It was a man on a vacation from history.

In a sense, the president and his team were right. Outrage about President Obama going to an exhibition baseball game in Havana after getting the news about Brussels was soon eclipsed by other stories. Within 24 hours, attention had shifted from the president’s stubborn refusal to act as if something serious had happened to controversies about Donald Trump and Ted Cruz’s statements about the Brussels attacks. The continuing media blowback against Trump and Cruz even overshadowed to some extent the reaction to photos of the president doing a tango at a state dinner in Argentina.

Trump’s bluster and doubling down on his talk of torture and bans on Muslim travel was satisfying to many of those who rightly fear the administration isn’t doing enough. But his lack of a coherent policy for fighting ISIS — other than a pose of toughness — is as evident as is the foolhardy nature of his isolationist comments about NATO. Cruz’s talk of policing Muslim neighborhoods had a kernel of truth in that police and the intelligence establishment need to keep eyes and ears open about possible incitement. But his comments conjured up an occupation of American Muslim neighborhoods that is exactly what we don’t need since such measures are likely to discourage assimilation. If neither of them lost many GOP primary votes with their comments, neither did they inspire much confidence in their command of the issue.

But instead of focusing on Trump and Cruz, it was the president’s behavior and comments that are still deserving of the most scrutiny. Having blundered the U.S. into the current conflict with an ISIS organization that still controls a huge territory in two countries and is strong enough to send its terrorists into European cities, the president proceeded to act this week as if the real problem was how to answer critics of his determination to stick to his schedule, go to a ballgame with Derek Jeter and then hit the dance floor at his next stop.

While the Obama communications team was caught off guard about criticism of pictures of the president playing golf soon after the news broke of ISIS beheading an American hostage, this time, they were better prepared for questions about the president’s jaunt to the ballpark. They insisted that Obama’s casual behavior shouldn’t be compared to George W. Bush’s decision to stay in the classroom reading to kids after learning about 9/11. They spoke of the symbolism of baseball, cited the precedent of Boston’s response to the 2013 Marathon terror bombing and, of course, shoveled out the standard line about not letting the terrorists win.

But if these arguments fell flat, it was not so much that a president is well-advised to steer clear of lighthearted activities on the day of a terrible tragedy as it is because Obama doesn’t seem to take the war against ISIS seriously, even when he’s not wearing cool shades and doing the wave with a dictator.

Ironically, the day before he went to the game Obama defended his trip to the communist nation even though it had not made any of the progress toward democracy or more respect for human rights that he had initially said would be needed before a presidential trip could occur. In his remarks, he spoke about not wishing to be trapped by history. That’s an important theme the president has often sounded as an excuse for decisions that ignored important lessons of history. Despite his lip service paid to the issue while in Cuba, the president clearly doesn’t think human rights is a priority. His intent was to pursue détente with the Castro regime regardless of its conduct or whether U.S. actions would better the lives of the Cuban people. Like the trip to the game, the Cuba excursion was not so much a matter of making history but ignoring it. The same applies to the president’s stubborn refusal to act as if the war on ISIS is a big deal.

He has in the past blamed the public’s fear of terrorism on the press and made it clear he considered it less important an issue that global warming. That attitude has been evident ever since he was reluctantly forced to declare a U.S. commitment to a war against ISIS in 2014. Since then that war has been fought on the cheap. The Islamic State remains in control of vast sections of Iraq and Syria and still able to carry the war to the streets and airports of European capitals. Obama’s promise to destroy ISIS has turned out to be empty words, as U.S. and allied forces conduct a lackadaisical war that shows little sign of ever resulting in the end of ISIS’s reign of terror.

Just as was the case after the November terror attacks in Paris, the president’s low-key reaction to Brussels is not so much a question of demonstrating calm in a time of crisis as it is a sense that what has happened is not important enough to cause him to rethink his strategy, let alone disrupt his schedule. If he said in Argentina that there is no “plan B” about dealing with ISIS, it is not because he really thinks the current strategy is working — which it obviously isn’t — as it is that he doesn’t view the war against the group he once dismissed as “the J.V.” is the main focus of American policy. Nothing, not even a wave of terrorism or failure in the Middle East, is enough to distract him from his refusal to face facts.

While Obama dismissed Trump and Cruz’s comments as not serious, his clinging to a remote control war in which the U.S. leads from behind isn’t that much better. There has to be something in between the calls for “carpet bombing” he decried and the minimalist offensive he has authorized. The longer ISIS is allowed to stay in place and to strike out at the West, the more it will be seen by the Muslim world as the strong horse that is beating the West. There may be no perfect strategy that is cost-free, but if the ill-considered words of the Republican candidates resonate with large numbers of Americans, it is because they sense Obama’s apathy and understand a more vigorous approach of some kind is necessary.

It would be far better if someone who had a better sense of what is appropriate behavior at a time of tragedy and crisis was leading the country. If the president were ready to make the war against ISIS a priority or to reconsider failed policies, he could go to all the ballgames and dance as much as he liked. The problem here isn’t optics. It’s the president’s disinterest in employing all the resources at his command in pursuit of a decisive victory. The president not only lacks a sense of urgency. He is on vacation from history not because he’s in Cuba or Argentina but because he thinks his pet projects really are more important than the Islamist war on the West. 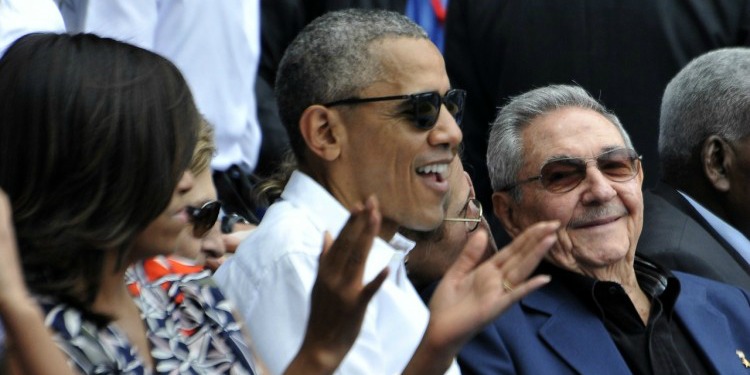