As 2015 ended, it didn’t seem as if President Obama or Secretary of State John Kerry were thinking about using their last year in office to try another push for peace between Israel and the Palestinians. Even Kerry’s hubris is not so great as to allow him to think that after years of failure he could now suddenly succeed in his quixotic quest under circumstances even less favorable than those that were in place during his previous tries. But that doesn’t mean the next 12 months will be free of confrontations between the administration and the Israeli government. To the contrary, there are clear signs not just of the always-simmering animosity between the president and Prime Minister Netanyahu but also of a possible U.S. decision to abandon Israel in the United Nations. Such a stunt would likely increase the chances for an escalation of violence rather than those of peace and would do the Democrats no good in an election year. But the president may be more interested in laying down a marker on the Middle East conflict as part of a dubious foreign policy legacy than rebuilding the bridges that got burned last year amid a bitter debate about the Iran deal.

The assumption in some quarters after the president was able to prevent a Congressional majority assisted by Israeli advocacy from scuttling the Iran deal was that the administration was interested in letting bygones be bygones. With ISIS on the rise, the Palestinians divided unable to bring themselves to negotiate region and America’s moderate Arab allies making common causing with Israel over threats from both Iran and Islamist terror groups, the time for burying the hatchet with Netanyahu seemed right. The administration announced a bigger military aid package designed to help Israel cope with the greater security threats it now faces and Netanyahu appeared to think all he had to do was to wait until Obama was replaced next January with a successor that was bound to be less antagonistic.

But in recent weeks, it appears that the relatively brief period of quiet in the squabbles between Washington and Jerusalem appears to have ended. The bitter denunciation of the Netanyahu government’s West Bank policies by Dan Shapiro, the U.S. Ambassador to Israel, sent a clear signal that election year or not, the gloves may be off again in the administration’s dealings with Netanyahu. The State Department’s endorsement of the European Union’s prejudicial labeling of Jewish goods made in the West Bank may have been expected but, along with another denouncement of Israeli land moves in the territories, has set a confrontational tone that doesn’t bode well for those expecting a period of quiet.

While these rumblings can be dismissed as just the usual back-and-forth between two irremediably hostile leaders, context is everything. And that is what may set up another epic and deeply damaging confrontation between the two allies.

The context of these U.S. attacks is the ongoing terror campaign known as the stabbing intifada in which Israelis suffer daily individual random assaults by Palestinians. Western journalists routinely rationalize these murderous rampages (such as this predictable effort by the New York Times) as the result of Israeli intransigence and Palestinian frustration. Yet the responsibility of the Palestinian Authority, as well as Hamas for promoting the stabbings and shootings is clear.

This third intifada began as a result of incitement by PA leader Mahmoud Abbas that spread false charges about Israeli plans to harm the Temple Mount mosques. This was a blatant attempt to boost Abbas’s Fatah Party’s waning popularity as it competed with Hamas. It failed to do that, but it encouraged the Palestinian population to take up the task of killing Israelis. The PA continues to honor such killers and those who die in the attempt to commit murder as heroes and martyrs.

But as much as the Palestinian leadership deserves the blame for starting this madness and failing to quash a destructive trend, the Obama administration must now be seen as taking its share of the responsibility for the continued bloodshed. The fact that Shapiro chose the day of the funeral of a Jewish mother living in a settlement who had been killed by terrorists for his speech did not escape the notice of either Israelis or Palestinians. He tore into Israel with misleading and largely false charges about Israel not seeking to stop violence against Arabs that effectively treated the actions of a tiny minority of Jews as morally equivalent to a policy backed by the overwhelming majority of Palestinians.

The response from the Palestinians was not long in coming. The Palestinians announced they would be returning to the United Nations this year to try and get the Security Council to pass a resolution labeling all Israeli settlements beyond the 1967 lines as illegal. This would stop short of an attempt at getting the UN to truly recognize Palestinian statehood without first making peace with Israel. As such it is entirely possible that an Obama administration still steaming over Netanyahu’s opposition to the Iran deal and still obsessed with opposing settlements, might seize upon such a measure as an opportunity to fire a shot over Israel’s bow.

Though Obama has had other opportunities to abandon Israel at the UN, up until this point he has chosen not to do so. His forbearance was wise since any effort to further isolate Israel at the world body would do the U.S. as much harm as it would Israel. U.S. allies are already worried about their fate, as Obama’s romance with Iran has taken precedence over their concerns. Stabbing Israel in the back at the UN would be yet another reminder that Washington can’t be counted on to stand up for its friends.

Even more important, the president’s determination to force Israel to retreat to the 1967 lines would, if given the force of a Security Council resolution, truly back the Jewish state into a corner in international forums. It would be one more stage in a process of delegitimization that would give aid and comfort to BDS groups seeking to falsely brand Israel as an “apartheid” state. As such it would, like his previous efforts to treat longstanding Jewish neighborhoods in Jerusalem as being as illegitimate as the most remote hilltop West Bank settlements, break new and dangerous ground in U.S. foreign policy.

The president came into office in 2009 promising to create more daylight between the U.S. and Israel. At the time, the justification for this policy was to encourage the Palestinians to trust the U.S. more and thereby make peace easier to reach. That never happened and just this week, the Israeli opposition — in which Obama once placed such hopes of their being able to unseat Netanyahu — announced that they had given up on the hopes for a two-state solution. But ironically just as even the Israeli left is sounding the requiem for the peace process, Obama may seek to create a policy that could create a breach between the two countries that even a successor would struggle to undo.

Though he may still be laboring under the delusion that he is laying a foundation for peace, the result of such a move would be to encourage even more Palestinian violence. That’s a poor legacy for any president but an even more dismal for one that envisioned his presidency as one that would transform the world. The transformation has taken place but unfortunately what he may be accomplishing is to take a bad problem and to make it much worse for those who follow him. 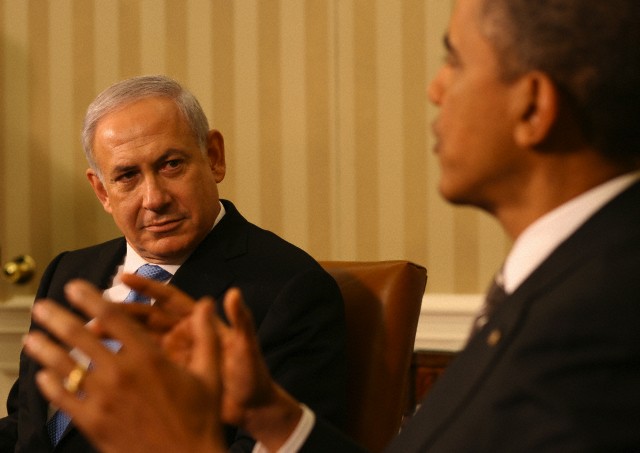