The poster child of the second intifada was Muhammad al-Dura, a young boy who was supposedly gunned down by Israeli army fire and died in the arms of his father during a firefight near the border between Israel and Gaza. That moment was caught in an iconic photograph and film footage taken by French TV. As it turned out, the claim that Israelis killed the boy was false as every serious investigation of the incident concluded. The film footage was highly edited. We don’t know much about what really happened with some even claiming the child never died. Yet the incident — which took placed in the context of an armed attack on an Israeli position by Palestinians — was widely publicized, leading people around the world to see the boy as a Palestinian martyr who had been murdered by heartless Israelis. That was an image that no amount of debunking or investigative reporting could ever undo, and al-Dura became the misleading symbol of a terrorist war of attrition that was misperceived as a story of Israeli oppression. As it happens, the third intifada, if indeed the current surge of bloody Palestinian violence comes to be known by that name, will also have an icon. But the true story of 13-year-old Ahmed Manasra won’t take years to unravel because the tale of the boy that Palestinian Authority leader said on Wednesday had been “executed” in “cold blood” by the Israeli army had collapsed even before those falsehoods passed his lips.

Manasra became famous this week as millions viewed a video clip on Facebook and other social media that showed him lying in the street bleeding, setting off outrage among Palestinians. Abbas mentioned the boy in his speech to the Palestinian people on Wednesday night and cited his fate as an of how Israel was “executing our boys in cold blood, as they did with the boy Ahmed Manasra and other children in Jerusalem and other places.”

The only problem was that Manasra wasn’t dead but was, in fact, resting comfortably in an Israeli hospital being spoon fed by nurses.

Nor was Manasra the innocent child victim that Abbas said he was or a martyr in the mold of al-Dura. Other video showed how he and his 15-year-old cousin Hassan stabbed two Israelis, a 25-year-old man and a 13-year-old boy, in the Jerusalem neighborhood of Pisgat Zeev. They are both seen carrying knives chasing a potential victim down a street. The boy was seriously injured. When Israeli police responded, Hassan Manasra charged at them with a knife and was killed. Ahmed attempted to flee but was hit by a car as he ran across a street.

While Palestinians said the two were innocent victims who had been unjustly targeted by police, later in his bed at Jerusalem’s Hadassah Hospital, Manasra confessed that he carried out the attacks shown in the video. He said he had done so because he had heard that Israel was seeking, as Abbas had falsely claimed, to attack the mosques on the Temple Mount. So when his cousin procured the knives, “I went there to kill Jews.”

That gave the lie to Abbas’s claims as well as to the entire myth the Palestinians were trying to propagate about the current violence. Far from an explosion produced by frustration over Israeli settlements or the failure of peace talks to produce a two-state solution, the attacks are an outbreak of religious fanaticism ginned up by Abbas’s incitement.

Nevertheless, that didn’t stop Palestinian officials like Saeb Erekat from continuing to spew lies to the New York Times:

Erekat, the secretary general of the Palestine Liberation Organization and a close aide to Mr. Abbas, said “Mr. Netanyahu’s attack on President Abbas is a failed attempt to distract from the fact that Palestinian civilians, including children, are being systematically targeted for extrajudicial executions by Israel.”

“The picture of Ahmad Manasra, the Palestinian child who was left to bleed on the street, clearly shows Israel’s disregard to human life,” he added in a statement.

Later the Palestinians tried to backtrack a bit after being confronted with a live Ahmed Manasra who had confessed to an act of terrorism. But, undaunted, they continued to claim that Israeli police were targeting Palestinian children instead of, as the facts indicate, that those “children” are attacking and in some instances killing Israeli civilians in acts of wanton murder.

But what is truly remarkable is the way that the distorted lens of media bias against Israel can mangle even the most straightforward stories about terrorism. The New York Times story on the incident bore the misleading headline “Conflicting accounts of Jerusalem strife surround a wounded Arab boy.” There are “conflicting accounts” but the video evidence of the attack makes it clear that any conflict is merely the product of Palestinian attempts to deny the truth. The “boy” is guilty of attempted murder and not, as the headline seems to indicate, a helpless victim of the conflict. More to the point, the story showed no interest in the plight of the real victims, the people Manasra attacked. Like last week’s astonishing Times feature that sort to cast doubt on the fact that the biblical Jewish Temples stood on the Temple Mount where mosques are located today, the story seemed to treat a cut and dried story of criminal behavior into a Rashomon tale in which a narrative of Palestinian martyrdom is as legitimate as an Israeli one about terror.

But the real story of Ahmed Manasra doesn’t tell us much about the issues that separate Israel and the Palestinians. What it does portray is a Palestinian society that has gone mad. Betrayed by corrupt leaders like Abbas who cynically hype lies about Israeli desecration of holy sites (when the real desecration is being done by Palestinians), Palestinians send their children and young people into the streets to commit murder in acts of suicidal violence. Seen in that context, Abbas isn’t merely a liar but a war criminal that is guilty of both inciting terror and abusing children.

Outside the southeastern corner of Jerusalem’s Old City walls is the valley of Hinnom. It is the place called Gehenna where the Bible tells us, apostate Jews and followers of pagan cults worshipped their false gods by sacrificing their children by fire. Jewish tradition considers it to be the destination of wicked souls and is usually translated into English as “Hell.”

But Palestinians are replicating that gruesome story today. By sending their children out to kill and be killed in the name of a politically motivated lie, they are committing a modern form of child sacrifice. Abbas, who has been touted by President Obama into a courageous man of peace, is sacrificing his people’s children on the altar of an endless war against the Jewish presence in the country that he cannot win. Though diplomats may continue to fawn on him, this week he was again exposed as the crudest kind of abuser of children. Like the new Palestinian poster child, those willing to believe any libel against Israel may still spread Abbas’s lies. But this time, the truth has caught up to the liars. 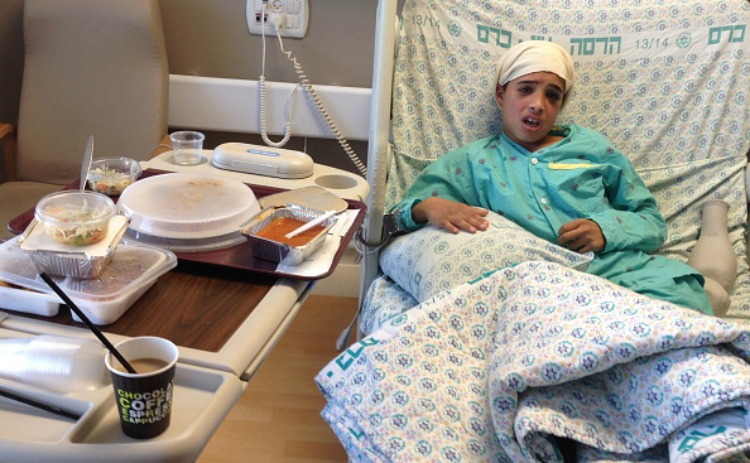