Those who claim that House Speaker Paul Ryan did something cynical or self-interested by refusing to endorse Donald Trump last week were wrong. Ryan is caught in a terrible trap in which he is trying to reconcile two conflicting obligations. As one of the two highest-ranking Republican officeholders in the country, he feels he cannot stand aloof from the presidential election against a Democrat that threatens to give us another four years of the Obama administration even if his party’s nominee appalls him. I think he means it when he says he’d like to unify Republicans as much as it is possible. But he also knows that he cannot lend his name and reputation to a candidate whose protectionist and isolationist stands are antithetical to everything that Ryan believes in and whose behavior disgraces the GOP. That leaves the political world wondering how he can possibly reconcile these two things when he meets with Trump tomorrow.

The short answer to that question is that he can’t.

Ryan may be hoping he can emerge from tomorrow’s conclave with Trump with concessions or promises that will enable him to at least make a nominal endorsement that won’t sacrifice his conscience. But no matter what is said at that meeting and no matter how much of his trademark earnestness he brings with him, the speaker is asking for the impossible. Trump is Trump. He won’t change his style, and he won’t commit to supporting conservative principles and policies that he never liked in the first place. Like every other member of his party, sooner or later Ryan is going to have to choose between partisan obligations and those of his conscience. There is no third path.

By not simply bending the knee to Trump but demanding that he accommodate conservatives, Ryan is behaving sensibly. In theory, Ryan was right last week when he said that it is the responsibility of the nominee to act to unify the party. Trump ought to have spent the few weeks since his victory became all but certain working to conciliate those who opposed him. That doesn’t mean just starting to act like a president rather than reality television performer or a billionaire mogul who is accountable to no one. It means trying to find common ground with conservatives and mainstream Republicans whose presidential choices were swept aside as Trump stormed through the primaries on a populist tide.

Ryan may hope that Trump will rethink his refusal to change or that in the course of tomorrow’s get together or subsequent meetings he will be able to somehow persuade him to make some concessions to conservatives that will allow them to retain at least a shred of personal honor in exchange for their endorsements.

But while Trump may be willing to come to Washington to meet with Ryan, there is little chance that he will give Ryan what he needs. Trump may be malleable about policy questions. Indeed, his positions are always subject to change. With the exception of his absurd promises to build a wall and to make Mexico pay for it and his call for a ban on Muslim travel to the United States, there are few if any positions he’s taken that haven’t been subject to change. He’s flip-flopped almost continuously in front of our eyes these last few months and often taken contradictory stands within the same speeches (a with his wildly inconsistent foreign policy address) or the same conversation as was the case most recently with his backtracking on his tax plan and calls for tax increases.

But Ryan is kidding himself if he thinks he can get anything of value out of Trump.

Unlike most presidential nominees who have worked their way up in politics to one extent or another, Trump is not someone who understands or cares about the dynamics of bringing together a vast, unruly coalition as Ryan must do in the House. Though in terms of the way he has played the system as a crony capitalist — he is the ultimate corrupt insider — Trump plays an outsider as far as Republican politics and conservatism is concerned. It is on the basis of that pose as the man who will sweep aside the political establishment that he has won the GOP nomination and sees no reason to change now. Indeed, there is every reason to think that he believes the votes he won in the past few months have given him a mandate to reject everything for which Ryan has stood.

Trump will be making a mistake by spurning Ryan’s entreaties. He may be riding high now, but significant defections from Republicans who believe that he is simply beyond the pale will doom any hope he might have to beat Hillary Clinton. He needs the mainstream Republicans and conservatives who are talking about staying home or even voting for Clinton to rally to his cause. He ought to fear such defections far more than Ryan should be worried about the puny threats of a Sarah Palin. Yet with so many Republican officeholders choosing to discard their principles and pay homage to him recently, Trump may think Ryan and other holdouts are bluffing.

More to the point, Trump simply is incapable of changing into the kind of candidate that Paul Ryan could support even while holding his nose. We already know that he thinks he doesn’t need to act in a presidential manner since his millions of fans love his political incorrectness and vulgarity. He may also think that he has beaten conservatism along with his 16 rivals for the nomination. He may believe this is the moment to kill it and complete the transformation of the GOP into something very different from the party that has championed conservative ideas since Ronald Reagan rather than letting his opponents up off the floor.

A Trump Republican Party will be a protectionist foe of free trade and a Know-Nothing faction that places itself at odds not only with illegal immigrants but all Hispanics and other minorities. Trumpism is in no small measure a personality cult built around a vulgar thug who renders conservative talk about values meaningless. Trump may believe in nothing but himself, but he has also tapped into an ugly populist streak in American politics that he won’t abandon because it is an expression of his repulsive personality. Trumpism is, as Brett Stephens noted in the Wall Street Journal, “a regression to the conservatism of blood and soil, of ethnic polarization and bullying nationalism.” There is no compromise possible between such a creed and the optimistic and pluralistic conservative vision championed by the late Jack Kemp that Ryan has spent his adult life supporting. To be suckered into a deal with a man with no principles will harm those principles even if the alliance only lasts until a November defeat and it will ensure the complete collapse of conservatism if somehow Trump wins.

As House Speaker, I know Ryan has obligations to other House members and the party he belongs to which others who are free to abstain from the Hobson’s Choice between Trump and Clinton don’t have. He may also want to be president someday. Ryan understands that his chances in 2020 or some other year will be undermined if his refusal to endorse the nominee can be used to blame him for what is likely to be a catastrophic defeat for which Trump alone will be truly responsible.

This means that Ryan, a good man who exemplifies all of the best qualities of our political culture, can either sacrifice his principles in the name of a dubious GOP unity or stand aside and keep his honor while knowing that doing so will undermine his standing as a party leader in the short term while also doing long-term damage to his presidential hopes. I don’t envy him this dilemma but whether he does it tomorrow or at some point before, during or after the Cleveland convention, choose Ryan must. 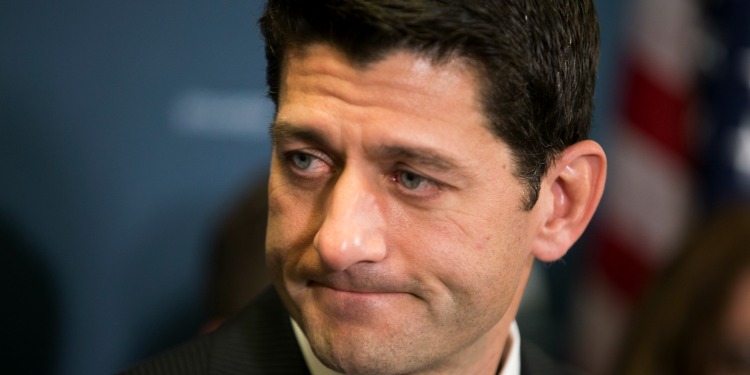