As Christians around the world prepare to celebrate Christmas even tomorrow, their television screens will be filled with the usual images from Bethlehem. We won’t hear much if anything about how that city’s once largely Christian population has been driven out by a rising tide of Islamist fervor and the Palestinian leadership’s desire for continued conflict rather than peace with Israel. Palestinians leaders will, as they do every year, speak of their suffering and recycle myths about Israeli persecution of Christians that are eagerly lapped up by credulous journalists. Then they will promote their own bizarre version of replacement theology in which the historical Jesus becomes, as Palestinian Authority leader Mahmoud Abbas likes to call a “Palestinian messenger.” The whole point of the show is to damage Israel’s reputation in the West and justify its isolation. But the real Palestinian Christmas show involves behavior that won’t be part of the Christmas Eve broadcasts.

Today, as they have virtually ever day for the past three months, individual Palestinian terrorists struck in attempts to kill random Jews they encounter on the streets. In this instance, it took place at the Jaffa Gates to the Old City of Jerusalem, a site familiar to tourists. Two Jews were killed after being set upon by two Palestinians who were killed by police that tried, in vain, to save the victims. That raised the toll to 24 Jews slain in this so-called “stabbing intifada.” More than 100 Palestinians, the vast majority of them terrorists cut down during the course of their attacks have also died.

Yet the same Palestinian leaders like Abbas who will speak tomorrow of Jesus’s message and of a desire for “peace on earth” and “justice” have also played a principle role in inciting these bloody attacks. It is the same Abbas who spoke just a few months ago about the need for Palestinians to prevent “stinking Jewish feet” from polluting holy places sacred to all three monotheistic faiths and who praises those who try to butcher Jews as “martyrs” that will be allowed to grandstand on international television tomorrow. And it is also the same Abbas that refused multiple Israeli offers of peace and statehood, in spite of his claims that this is what he wants.

But, of course, Abbas isn’t the only source of Palestinian leadership. Though they will not put on a Christmas show for the world, Hamas is also making its presence felt. Unlike Abbas’s Fatah Party, those Islamists make no pretense of respecting Christianity. But it is fear of competition from the rulers of Gaza that impels Abbas to continue to stoke the fires of conflict when not preening for the foreign press.

Hamas is observing the cease-fire that has for the most part been preserved along the border with Gaza since the 50-day war with Israel ending in the summer of 2014. It doesn’t want another all-out battle such as the one that devastated the Strip after they initiated a new round of fighting with terrorist murders and by launching several thousand rockets at Israeli cities, towns and villages. But it is also mindful of the fact that Israel is equally wary of having to launch another ground assault on this heavily fortified terrorist base that is for all intents and purposes an independent Palestinian state.

But Hamas is not content to let the conflict be put on a back burner. It is actively seeking to foment terrorism in the West Bank ostensibly run by Abbas as well as within Israel itself. That’s the motivation for the terror cell and bomb factory that was uncovered by Israeli security forces in East Jerusalem and announced on Wednesday. The cell was swept up before it could be put into operation, but the implications of its existence are far-reaching. It consisted of at least the 25 Palestinians that have been arrested, the majority of whom apparently were students at Al Quds University in the Jerusalem neighborhood of Abu Dis. The group operated a laboratory for making explosives and was reportedly under the direct control of the Hamas leadership in Gaza.

The goal of its operations was to transform the stabbing intifada into an even more bloody wave of terror. Suicide bombings reminiscent of the second intifada that raged in the last decade would have untold consequences for Palestinians as well as Israelis.

Apologists for the Palestinians will say that Israeli intransigence and a refusal to stop building settlements in the West Bank or relinquish territory is the reason for both the stabbings and Hamas plans. But that is a story line that only those who haven’t been paying attention to events in the region can believe. Abbas has boasted of his refusal to accept Israeli offers, and Arafat did the same. Though the PA speaks of its acceptance of a two-state solution, they’ve proven over and again that they refuse to recognize the legitimacy of a Jewish state no matter where its borders are drawn. As for Hamas, it makes no pretense of wanting anything but Israel’s destruction and the slaughter of its people.

Though their methods differ and the PA is ironically dependent on Israeli security for its continued rule in the West Bank, neither has any intention of making peace in the foreseeable future. That’s why Israel continues to be stuck with its “occupation” of the West Bank even though the vast majority of its people would accept a division of the country in exchange for real peace. The problem is that they know pulling back from the West Bank, even including the dismantling of settlements, would produce the same results as in Gaza where every Jew, soldier, and settlement was withdrawn.

Those are the key facts to remember when you see tomorrow night’s Christmas show from Bethlehem that will be repeated in an endless loop the following day on the news channels. The reality of Palestinian Christmas isn’t the prayers of victims for freedom. Rather it is of a continued determination to wage a terror war against the descendants of the real Jesus as opposed to the Palestinian myth. 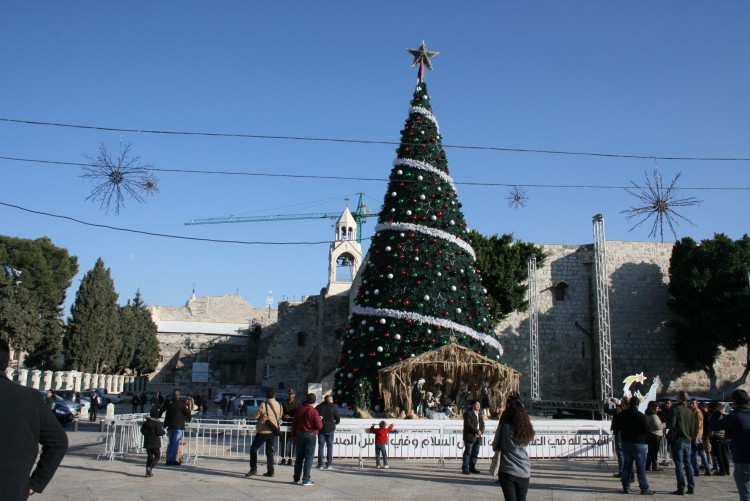