During his first term of governor of Wisconsin, Scott Walker underwent a trial of fire that few politicians are ever forced to endure. His struggle with union thugs and determined to preserve their power to bankrupt the state and their Democratic Party allies made him a conservative folk hero. But once he started running for president, some of the glow from those struggles has started to wear off. While his fight with the unions was about his devotion to principle, his push for the presidency has seemed to bring out some less attractive qualities, such as a tendency to flip-flop when pressed on controversial issues. The latest such instance concerns a conversation with a scholar at the Heritage Foundation who said Walker had promised him he had not completely renounced a previous position in favor of a path to citizenship for illegal immigrants. Given Walker’s decision to swing to the right in order to win the Iowa caucuses next winter, such a stance would be a problem. So Walker’s office prevailed on Stephen Moore to recant his account of a conversation with the governor and to say the conversation had never taken place. Would that it were that easy to answer all the questions that have emerged about Walker’s willingness to walk on both sides of the fence on that issue.

This isn’t the first time Walker has been accused of flipping on immigration. Back in March, I noted that the Wall Street Journal reported that the governor had told a private dinner of New Hampshire Republicans that he favored amnesty for illegals. That was consistent with his past stands on the issue prior to his entering the presidential contest. As late as 2013, he backed a path to citizenship for those here without documentation. But, as they did with Moore, Walker’s staff denounced the Journal article even though the paper had three witnesses to back up their account.

Walker understands that, while he appears to have held onto his spot in the first tier of Republican candidates, his path to the nomination depends on winning Iowa. To do that, he has calculated that he must position himself firmly on the right. His hope is to crush challenges from the likes of Ted Cruz, Rick Perry, Mike Huckabee, Rick Santorum, and, now, Donald Trump before emerging to take on the winner of the titanic struggle between Jeb Bush and Marco Rubio in Florida and/or a surprise moderate winner in New Hampshire in what will ultimately be the finals of the GOP contest over the course of the rest of the campaign.

But in order to do that, he needs to allow no room on his right flank on the issue of immigration. While he is as potentially vulnerable on immigration to criticism from the right as Marco Rubio (who co-sponsored a comprehensive immigration reform bill that he has subsequently backed away from), Walker has tried to compensate in the past few months by assuming a stance of strident opposition to amnesty proposals. But his discomfort with this pose seems to come out every now and then such as the speech in New Hampshire or his talk with Moore where he tries to assure more moderate Republicans that he is “not going nativist.”

In this latest case, no doubt Walker’s camp will accuse the New York Times of playing “gotcha” journalism in an effort to embarrass him. But while the bias of the Times against Republicans is real, in this case the material they’re working with is the product of Walker’s own penchant for hedging privately in a way that makes his public statements sound hypocritical or false.

As I also noted back in February, when Walker adjusted his views on ethanol subsidies in Iowa in the same manner, a pattern of behavior is emerging. Instead of sticking to his past positions on these issues, Walker has shown a disturbing willingness to chuck them aside in order to gain votes among Iowa farmers and conservatives. While such behavior is not exactly unusual in politicians, it is in marked contrast to the sort of exemplary conduct that first brought him to national attention.

Walker is still a dynamic speaker and has a lot of the elements that ought to make a perfect candidate for the Republican nomination. His everyman persona, strong record as a governor, and mix of mainstream and conservative positions puts him in a sweet spot where he should be able to command support from Tea Partiers and mainstream establishment Republicans, who want a fiscal conservative, and evangelical Christians who seem him as one of their own. But a tendency to waffle on a key issue like immigration is a bad sign both for his campaign and his ability to govern effectively on the national stage.

With the first GOP debate only a month away, it is no longer possible to excuse Walker’s missteps as the inevitable mistakes of a rookie on the national stage. Walker needs to make up his mind about immigration and stick to it. Walker’s flip flop problem is real. If he continues to need his staff to pressure people to walk back accounts of his flip-flopping, he’s going to find himself outflanked by conviction conservatives on the right who need no such help as well as other Republicans who are prepared to stick to their guns in the same manner that Walker demonstrated back in 2011 when he was besieged by the unions. 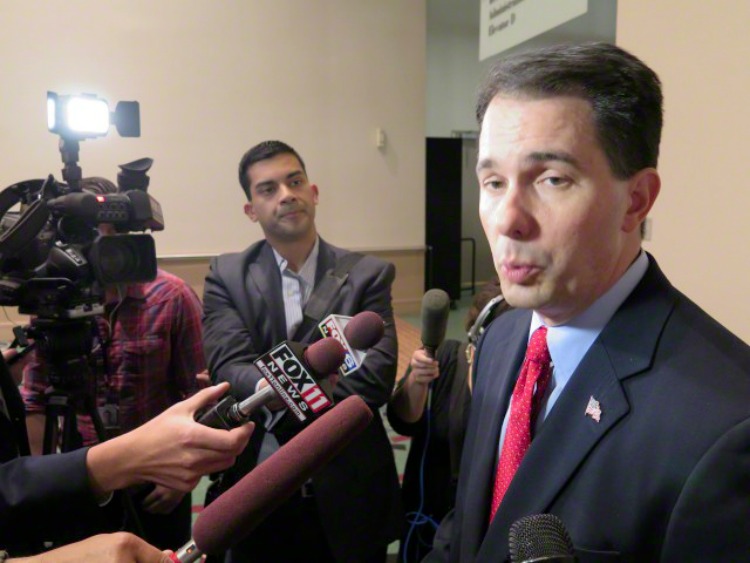