Today, Americans got two competing visions of who should control the Supreme Court. On Capitol Hill, Senate Democrats staged a mock confirmation hearing for Judge Merrick Garland, President Obama’s nominee to fill the seat left vacant by the death of Justice Antonin Scalia. Meanwhile, the presumptive Republican presidential nominee issued a list of jurists from whom he would pick the person to fill Scalia’s spot. Both were calculated ploys intended to mobilize the bases of the two parties for the upcoming presidential election. But while neither Garland nor any of Trump’s 11 potential justices may ever wind up serving on the Court, both of these pieces of political theater should remind us that the real decision about the future of the judiciary will be decided by the voters in November and, at least in this respect, they are being given a clear choice.

The Democrats’ mock hearing for Garland is the latest in a campaign intended to shame Republicans into confirming the liberal judge solidifying the left’s hold on the high Court. But like every other gambit they’ve tried, this one fell flat. The stunt convinced no one that isn’t already supporting President Obama’s effort to alter the political balance on the court to change their mind. Polls may show a majority of Americans are sympathetic to the idea that the vacancy on the court should be filled. But this is an unprecedented attempt to flip the Court in a presidential election year where a different party than the one in charge of the White House controls the Senate. Everyone on both sides knows that if the situation were reversed and an outgoing Republican president wanted a Democrat-controlled Senate to confirm a fifth conservative justice, they would do as Vice President Biden said they would in 1992 or Chuck Schumer noted in 2007 and refuse to act. At a time when the country is so starkly divided along ideological and partisan lines, the notion that either side has virtue on its side in such a debate is risible.

As I’ve written previously, there is also no reason for the Republicans to fold on this issue even if they think it’s likely that their party will lose the presidential election.

First of all, Garland is, contrary to White House spin, a reliable Democrat whose views place him to the right of two of the current liberal justices. Republicans have nothing to lose by turning him down since the difference between him, and a possibly even more left-wing justice that might be named by Hillary Clinton is minimal.

Second, confirming Garland would be a signal that the GOP is conceding the White House, something they can’t do even if members of the Republican caucus believe, as some do, that Trump can’t win. They can’t do that even if some of them actually do hope he loses.

All of which means that today’s mock hearing, like every other aspect of the campaign for Garland, is as much a waste of time as the Republicans trying to repeal ObamaCare. The only purpose is to rile up their base about GOP perfidy but, compared to the possibility of a Trump presidency, Garland’s fate doesn’t amount to much. By November, it’s doubtful even most Democrats will even remember Garland regardless of how badly Obama would like them to care about his nomination.

On the other hand, Trump’s list was significant. Trump has shown a willingness to run to the left of Hillary Clinton on economic and foreign policy issues and has already declared himself uninterested in conservative principles. Yet the one argument that seems persuasive to many on the right who believe the candidate’s wildly inconsistent stands and thuggish behavior render him and their party unfit to govern is the future of the Supreme Court. Some conservative pundits believe that the conservative movement can survive the ordeal of four years of Hillary Clinton being back in the White House but not a Trump presidency that would transform the GOP into an isolationist, protectionist and nativist party that abandoned its principles. But the prospect of Clinton transforming the Supreme Court and changing American law for a generation is one they can only contemplate with horror. That’s why Trump’s list of 11 prospective conservative justices is likely to nudge some wavering #NeverTrump Republicans into reluctantly backing him.

Of course, no one has any idea whether Trump will keep his word and nominate anyone on this list. He changes his mind all the time on virtually every other issue so why not on this one? But even if he is just trying to fool conservatives, publishing such a list as well as perhaps naming some potential cabinet members is exactly what he needs to do to have any chance of uniting most Republicans behind him.

But whether Republicans believe Trump or Democrats are just playing the hypocrite on Garland, one thing is clear. The ability to determine the composition of the Supreme Court is one of the most important jobs of the president and one that voters ought to take seriously when determining for whom they will vote. Most voters may not like the two choices that they are being presented with in November. In particular, conservatives have good reason to complain that the GOP nominee does not present a distinct alternative to Clinton on many important issues. But on the Supreme Court at least, voters are now being presented with something that looks like a clear choice. 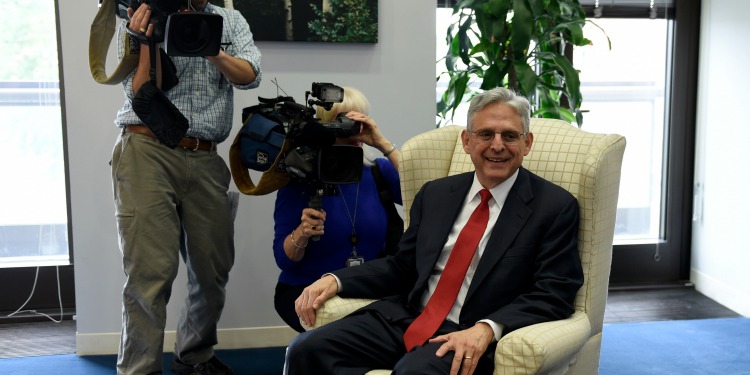