Israelis witnessed more Palestinian terror attacks today as what may be a third intifada continued on its roads and cities. But whatever decisions the Israeli government takes in the coming days to defend its citizens, it knows one thing: the Obama administration doesn’t have its back. The discord between the two governments has reached the point where Prime Minister Netanyahu knows that no matter what it is said publicly, the White House can’t be trusted to back any moves it might be forced to make. That’s especially true since the White House hasn’t chosen to publicly admonish Palestinian Authority leader Mahmoud Abbas for his failure to condemn the bloody attacks on Israelis or to cease stirring up hatred by exploiting fears about the future of the Temple Mount. But understanding their dilemma requires more than a review of the last week’s events or the maneuvering at the United Nations where the U.S. is still threatening to undermine Israel’s position.

The Israelis know that, as has been the case for the last seven years, the administration is always spoiling for a fight with them under virtually any circumstances. That’s why the excerpts from Dennis Ross’s upcoming book that were published today in Politico about the way the U.S. bypassed Israel during the Iran nuclear talks provide insight into more than just that series of events. The inclination of Obama and National Security Director Susan Rice to attack the Israelis rather than cooperate with them, up to the point where Rice played the race card in an effort to undermine Netanyahu, illustrates the extent of the damage that has been done to the U.S.-Israel relationship.

The headline on the Politico website for the Ross excerpts when it went up on Thursday morning was one that used a quote in which the State Department veteran claimed that Rice spread the word that “Netanyahu did everything but ‘use the N-word’ in his interactions with Obama over Iran. Later in the day, that was changed to the more neutral (and actually more in keeping with thrust of the content of the story) headline, “How Obama got to “Yes” on Iran.” But as inflammatory as that initial headline was, that one line was what has everyone talking about Ross’s book today. Indeed, although Ross’s purpose is to try to repair what he correctly terms the unnecessary damage to the alliance that was caused by the administration’s combative attitude toward Netanyahu, that false allegation by Rice actually tells us more about what’s wrong between Washington and Jerusalem than anything else.

The point of Ross’s narrative is fairly obvious. He clearly believes that even Obama and Netanyahu — two men with very different worldviews and who didn’t like each other — could work together on Iran and other issues because their differences paled in comparison to what the two nations have in common. But time and again, Obama went out of his way to alienate and isolate Netanyahu in pursuit of the “daylight” that he has always sought to create between the U.S. and Israel. Obama’s clear signals to Iran that he had no intention of walking away from the negotiations no matter what Iran did or to ever consider using force made it obvious to the Israelis that the Islamist regime would get its way in the talks.

Ross draws a distinction between Obama’s first term, when a figure such as National Security Director Tom Donilon worked to reassure the Israelis that they were not being left alone to fend for themselves, and his last. In his second term, Obama ceased caring about what the Israelis thought, and Donilon’s successor Susan Rice acted on that imperative. The Israelis weren’t told about the initial talks with Iran in 2013 or their progress until days before an interim agreement was reached. Rather than seeking to include or consult with the nation that Iran’s leaders have repeatedly said they wish to destroy, Obama and Rice shut the Israelis out. When Netanyahu complained and argued against the policy of appeasement that Obama had embraced, the response from the administration was devastating. Rice didn’t merely dismiss Netanyahu’s reasoned arguments. She spread the word that his resistance to Obama was rooted in racism.

What was the point of this canard for which she could provide not a shred of evidence?

For starters, Obama and Rice do not conceive of the U.S.-Israel relationship as an alliance in any meaningful sense. Unlike his predecessors who saw Israel as the sole beacon of democratic values in the Middle East, Obama has always seen it as something of an obstacle to his desire for rapprochement with the Arab and Muslim world that he articulated in his 2009 Cairo speech. Even when Israel’s existence is at stake as it is in the question of the Iranian nuclear program, the administration regards the Jewish state as something to be tolerated rather than celebrated. Though other administrations, even the ones that were the friendliest to Jerusalem, quarreled with Israeli governments, none were so quick to publicly attack their ally. That Rice pulled the race card out of her pocket as a response to Netanyahu’s pleas to step back from a path toward appeasement of Iran had little to do with anything Netanyahu said as must as it did with Obama’s intolerance for any criticism. For Obama and Rice, Israel is nothing more than a client state that should take orders and keep its mouth shut. Accusing Netanyahu of racism was simply an excuse to stop listening to him and to signal to the world that the alliance with Israel was no longer an American priority.

The problem with Ross’s account is that while he diagnoses the problem, he refuses to draw the correct conclusions from what he observed. He’s right when he sees that the quarrel between Obama and Netanyahu over Iran was largely unnecessary. It was the product of the administration’s obsession with daylight, its desire to keep Israel in the dark at all times about Iran and overreactions from Obama and Rice whenever disagreements came up.

Israel knows that it can’t trust Obama as it fends off Palestinian terror for the same reason it learned it couldn’t trust him on Iran. The problem was more than just Rice’s failure to pick up the phone to call Jerusalem, as Ross thinks Donilon would have done. The divide between the two governments isn’t about bad personal interrelations but Obama’s desire for détente with Iran. That policy required a downgrading of relations with Israel, and that is what has happened. Contrary to Ross, this was no misunderstanding. Washington took every step down this road toward a crisis in the relationship, which dates back to Obama’s first days in office, with that objective in mind. The race card employed against Netanyahu wasn’t an isolated incident. It was just one more indication of Obama’s contempt for the Jewish state and his disdain for the alliance. 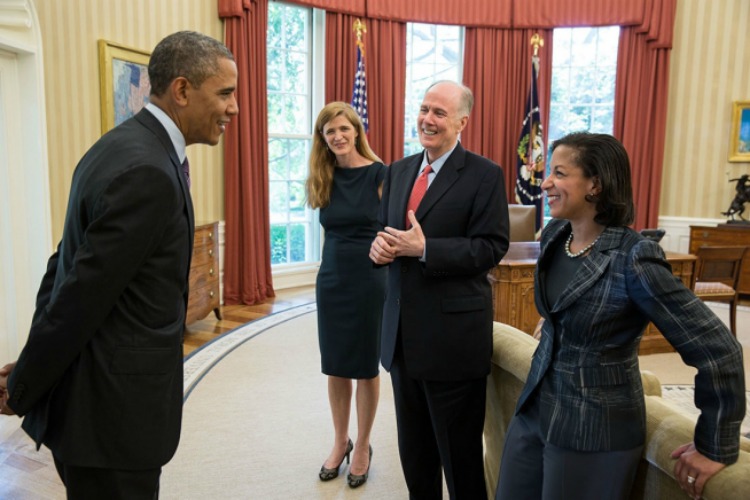