On some level, the decision of much of the organized Jewish community to support the entry of Syrian refugees is understandable. American Jews are largely a community composed of the children, grandchildren, and the great-grandchildren of immigrants. Much of their original communal infrastructure was organized around the need to provide services for newcomers to the country and to defend their rights. As an ethnic/religious minority, Jews have always been rightly concerned about protecting other minorities, seeing the defense of each component of society as integral to the safety of all citizens as well as the preservation of America as a country where all were welcome. Thus, the decision of 11 major Jewish organizations to write to Congress earlier this week urging them not to pass, as the House did yesterday with bipartisan support, a bill seeking to tighten screening procedures for Syrian refugees, it was a case of these groups operating on automatic pilot.

If that tradition were not enough to motivate much of the Jewish community to take such a stand, then surely the statements coming from Donald Trump and Ben Carson about Syrians and Muslims made it even easier for them to do so. As our Noah Rothman noted earlier, Trump’s comments about closing mosques and being willing to consider “registering” Muslims were deeply offensive as well as profoundly stupid. The same goes for Carson comparing Syrian refugees to a “rabid dog.” The pair may be gaining some applause from certain segments of the right, but they are also playing right into President Obama’s hands, making his refugee policy seem more defensible and helping to divert attention from the more important question of the administration’s unwillingness to reconsider a half-hearted and failed strategy for fighting ISIS.

But even after these latest distractions, the Jewish groups that are pushing hard to admit Syrian refugees are still wrong. Moreover, in doing so, they seem to be committing the one cardinal sin that generally gets their dander up when others do the same thing: making an inappropriate Holocaust analogy.

In a piece published yesterday in the Huffington Post, new Anti-Defamation League head Jonathan Greenblatt acknowledged that it was possible to claim that the refugee crisis of the 1930s and 40s and the one in Syria are not comparable, but then he went right ahead and doubled down on the analogy.

The Syrian crisis is great and it is one that we at COMMENTARY have been writing about for years as the Obama administration dithered on Syria as a bad situation got progressively worse, and then became a threat to the region and the world. But this is not the Holocaust, and the perils, both to the refugees and to the nations that might take them in, are nothing like those facing the world 70 to 80 years ago. To be blunt, it is highly inappropriate for the group that has taken on the responsibility for policing the use of inappropriate Holocaust analogies to be engaging in the same kind of poorly thought out polemics that it routinely slaps down when they emanate from other quarters.

As I wrote earlier this week, the notion that refugees are potential terror threats is not a figment of Trump or Carson’s fevered imagination. We have already seen refugees in Europe taking part in Islamist terror. The camps where they are presently stuck are in many cases controlled or heavily influenced by terror groups making it easier for potential threats to infiltrate those seeking entry. Moreover, despite the mantra we’re hearing from other Obama administration apologists, the FBI has already admitted that it can’t properly vet Syrian refugees. That’s why 47 House Democrats voted with the Republican majority to toughen the program. It’s also true that the resources devoted to absorbing a token number of Syrians would be better spent on the far greater problem of the condition of the camps now. If Jewish groups were mobilizing to help the refugees in place — the way they did a few years ago when genocide was threatened in Sudan — rather than devoting their energy to a knee-jerk approval of the entry of any population into the country, they’d have a much stronger argument.

But leaving aside all those powerful reasons to put a brake on refugee absorption, it’s important to understand that the promiscuous Holocaust analogies we’ve been hearing from Jews in defense of the president’s policy are dead wrong.

Jews desperately wished to get out of Nazi Germany and the nations that fell under Adolf Hitler’s sway. The decision of the British to close the gates to Palestine and the refusal of the United States to take more than a token number of those Jews fleeing was a death sentence for those stuck in the Nazi empire of death. Greenblatt is correct to note that Jewish refugees were not viewed as favorably then as they are in retrospect. The factors behind that shameful American decision revolved around isolationism, anti-immigrant sentiments, and anti-Semitism. Others feared that the Jews would be communists. Trump’s comments provide a facile analogy to the hate that dominated the discussion in this country about immigrants during the Holocaust era. But that’s about as far as the analogy goes.

The threat to the West and the United States in that era was nothing like the one we face today. The danger to America and other democracies came in the form of the conventional armed forces of the Axis, not terrorism. The Jews seeking entry to the U.S. were being singled out in their countries of origin for persecution and death. That is true of Christian and other religious minorities in the Middle East, but not for most of the people who have fled Syria. Yet the mere suggestion that those minorities should be given more favorable treatment by the U.S. has been shot down as religious prejudice by the president and his liberal cheerleaders.

More specifically, no faction of the Jewish people had declared themselves at war with the U.S. and its way of life. To the contrary, their plight illustrated the stark differences between the democracies and their Nazi/fascist adversaries. While most of the refugees may be innocent victims of the war, a significant portion of their population is openly hostile to the U.S. and sympathetic to some of the same forces that are carrying out atrocities. It is only sensible that the U.S. strengthen its clearly inadequate vetting procedures before proceeding to let more Syrian refugees in.

Let’s also understand that while the refusal of the West to provide a haven for Jews was a significant factor in the death of millions, what’s going on now is nothing like that. The refugees are suffering but what they need is for the civil war to be ended so they can go home, not a mass exit to the West. The U.S. offer to let in tens of thousands is just a token gesture, not a meaningful effort to solve a problem that President Obama helped create.

One more thing needs to be said about the effort of most major Jewish groups to weigh in on the refugee question. Some of the same groups that are fighting for Syrian refugees did not speak up this past spring and summer when a question of genuine importance to the Jewish community was at stake. Many American Jewish groups, including the Union of Reform Judaism, took a pass on the Iran nuclear deal despite the grave dangers it posed to Israel and the Jewish future. Others, like the ADL and the American Jewish Committee did, to their credit, oppose it. But I honestly don’t recall the same kind of passion being displayed in that effort that we are hearing this week about refugees. Indeed, the ADL went out of its way to condemn any effort to compare the genocidal threat posed by an Iran nuclear program to the Holocaust. The stark difference between the reaction of the organized Jewish world to these two issues illustrates how partisanship and the inclination of liberal Jews to rise to the defense of the administration and against anything proposed by most Republicans influences their decisions.

While I think these groups are wrong to defend the administration on the question of Syrian refugees, they are well within their rights and the traditions of the Jewish community on immigration issues to do so. But they have no right to be using Holocaust analogies. Doing so is not only hypocritical and inappropriate, it also undermines the uniqueness of that historical event. It’s disturbing that some of them seem willing to forget that principle when the interests of the Obama administration are at stake. 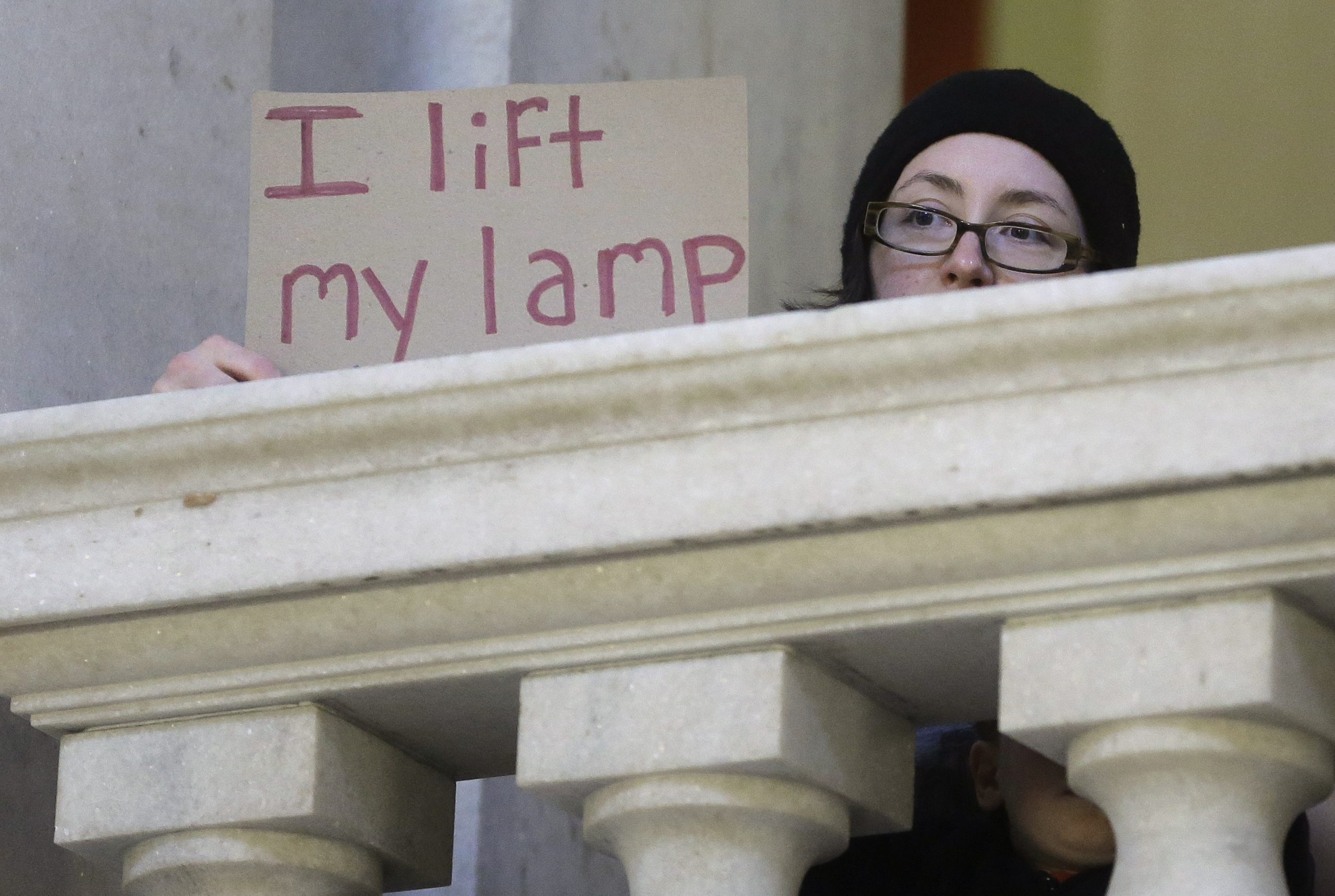