When Abe Foxman retired from his post as national director of the Anti-Defamation League after 50 years there, including 28 at its head, there was uncertainty about the direction his successor would take the organization. Unlike Foxman, Jonathan Greenblatt wasn’t a longtime staffer at the anti-Semitism monitoring group nor was his background in pro-Israel advocacy or Jewish philanthropy. He was, instead, representative of a new generation of Jewish leaders, an entrepreneur and corporate executive with experience in non-profit charitable work. But the items on his resume that stood out the most to those with an eye on ADL’s ability to interact with the political world were those that spoke of his time as a staffer in both the Clinton and Obama White Houses. That raised questions as to whether the veteran Democratic operative would stand up for Israel in conflicts with his former boss.

This week we received the answer to that question in the form of an article in Foreign Policy by Greenblatt attacking Israeli Prime Minister Benjamin Netanyahu. Greenblatt took issue with Netanyahu’s video posted last week accusing the Palestinians of advocating “ethnic cleansing” because of their efforts to force the eviction of hundreds of thousands of Israelis from their homes in the West Bank and Jerusalem in order to create a Palestinian state where Jews could no longer live. The Obama administration reacted to the comments with fury. The administration views arguments about whether Jews have a right to live in the territories as irrelevant to the quest to create a Palestinian state.

But rather than side with Netanyahu on a question of Jewish rights or even maintaining a stance of public neutrality while voicing his opinion behind the scenes, Greenblatt dove headfirst into this debate with an opinion piece. Echoing the administration’s talking points, Greenblatt said the prime minister was wrong to assert that Palestinians should accept the potential presence of Jews in their state the same way Jews accepted Israeli Arabs as fellow citizens with equal rights. Since Israeli settlers in the West Bank and Jerusalem consider themselves Israelis and need to be protected by the Israeli Army, he says there’s no comparison. More than that, the ADL head says that by using the phrase “ethnic cleansing,” Netanyahu is invoking the specter of genocide in an inappropriate manner for “crass political ends.”

While he is right that the issue of settlements is complex one about which Israelis can and do disagree, as I noted yesterday, there is nothing unreasonable about Netanyahu’s argument. In order to claim, as Greenblatt does, that Palestinians don’t want to ethnically cleanse the country of its Jewish population, you have to ignore not merely the entire history of the conflict but also specific statements made by Palestinian Authority leader Mahmoud Abbas, Hamas (the ruler of the Palestinian state in-all-but-name that already exists in Gaza) and the drumbeat of incitement of hatred against Jews and Israelis in Palestinian media, schools and popular culture.

It’s true that in negotiations where Israel has repeatedly offered the Palestinians statehood, the assumption is that some settlements would be evacuated just like the ones Israel left behind in Gaza in 2005. But that’s because everyone understands that Jews denied the protection of the Israel Army or a means of self-defense wouldn’t stand a chance of survival when left to the mercy of the Palestinians.

But leaving aside the merits of Netanyahu’s assertion, Greenblatt’s decision to side with the Obama administration against the government of Israel is telling.

Foxman sometimes ran afoul of those on the Jewish right who disliked his backing of the peace process. But liberal publications like the New York Times criticized him for being a strident cheerleader for Israel who would recklessly invoke the memory of the Holocaust to silence the Jewish state’s critics. That was both inaccurate and deeply unfair, especially given the rising tide of anti-Semitism around the globe that now operates under the banner of anti-Zionism. Moreover, opposing anti-Jewish incitement such as that of the Palestinians and their allies is the essential element in ADL’s brief—monitoring anti-Semitism and hate speech in general as well as to stand with Israel.

Thus for Greenblatt to re-position ADL from its former centrist position as a mainstream address for pro-Israel activism to one that is now in open opposition to the democratically-elected government of Israel is a sea change of enormous importance. From now on, ADL must be viewed as an ally of J Street and others on the left who make no secret of their partisanship in the context of both Israeli politics and the tense relations between Israel and the United States. This is a betrayal of ADL’s long and honorable legacy as a group that sought to speak for the interests of the Jewish community as a whole and respected the right of Israel’s people and their leaders to make their own decisions about security.

It is equally outrageous for Greenblatt to use his newly inherited mantle as the man who can pose as the arbiter of what was or was not anti-Semitism to attack Israel’s government. Inappropriate Holocaust analogies are always wrong, but that is not what Netanyahu was doing. Enough Jewish blood has been shed by Palestinians driven by hate for us to understand the stakes in that conflict. Whatever one’s opinions about settlements, the ADL has no business weighing in on this subject in a manner that effectively gives the Palestinian culture of hate a pass. Doing so also undermines the ADL’s credibility in the fight against the forces threaten both Israel and world Jewry.

The ADL has a responsibility to speak out against the kind of Palestinian hatred that does advocate ethnic cleansing and to not allow its name to be used by those orchestrating a campaign of pressure against Israel’s government. By jumping into an argument that a wiser and less partisan leader would have avoided, Greenblatt is the one who is playing crass political games. If the ADL’s leadership and donors don’t wish to discard their mainstream legacy, it needs to demand that Greenblatt retract his attack on the prime minister or step down. 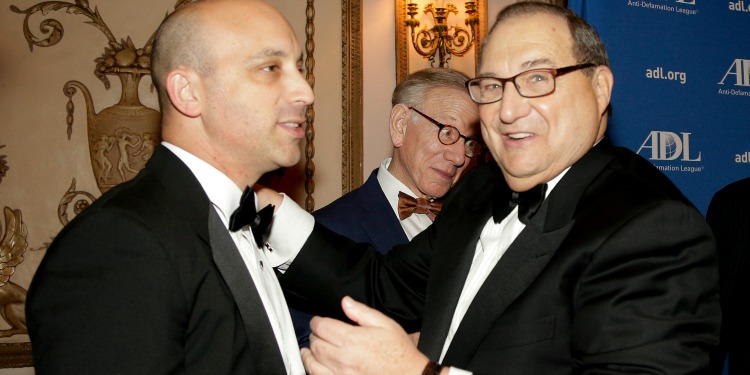