Sen. Christopher Murphy staged a 15-hour Senate filibuster that ended on Wednesday when he declared that he’d gotten Republican leaders to agree to a vote on gun control amendments to spending bills. The claim that he had gotten Republicans to bend was ridiculous, for, as even the New York Times noted, there was never any doubt Senate Majority Leader Mitch McConnell would agree to the votes. What Murphy did was just a piece of theater designed to appeal to the emotions of C-SPAN viewers delaying Senate business for a day.

Senators grandstanding for the cameras is just business as usual. What was interesting was that the emotionalism about guns did seem to influence one very unlikely actor: Donald Trump. On a day when Trump gave a speech in which he ranted about Republican leaders needing to “get tougher” and to just be quiet, he was the one who seemed to fold on the gun issue.

Only weeks after pledging fealty to the National Rifle Association and resistance to liberal gun control proposals, Trump proved to the group he isn’t kidding when he speaks of being “flexible.” He  said he agreed with liberals on a measure that would ban anyone on a “terror watch list” from legally obtaining a gun.

The “terror watch list “proposal was part of the rationale for Murphy’s filibuster and, on the surface, it sounds entirely unproblematic. Who, after all, is in favor of letting terrorists legally purchase weapons? But terror and no-fly watch lists often include many people who don’t belong on them. The NRA and most Republicans properly oppose abrogating an individual’s constitutional rights without credible evidence of wrongdoing while also denying them any due process or right of appeal.

And though denying a gun to someone on a terror watch list sounds like a great idea, security experts also warn that doing so would alert a genuine suspect that they were under scrutiny and might compromise any active investigation.

In other words, what sounds like an easy fix may actually create more problems than the idea’s advocates might admit—like the New York Times editorial page. In its latest fit of irresponsible hysteria, the mirror image of Trump’s attacks on President Obama, it accused the NRA of aiding terrorism.

Even more striking, this solution wouldn’t have stopped Orlando shooter Omar Mateen—since he wasn’t on the terror watch list. Now, it’s true that in one version of the amendment, he might have been affected, since that version included a ban on anyone who had been investigated by the FBI during the previous five years. So many innocent people would have been caught up in that web it would have created a vast legal logjam—and one that would simply direct would-be killers like Mateen to readily available illegal sources of weapons. Like almost all gun control provisions, this one wouldn’t do much to stop criminals or terrorists.

Efforts by some centrist Republicans and Democrats to forge a compromise—one that would create some sort of due process for those on the list—might resolve the impasse in the Senate. But the proposal, which was voted down by the Senate last December, isn’t going to pass the House. So like Murphy’s filibuster, this entire exercise is for show and, for all of the heart-wrenching rhetoric expended on the subject, has little to do with practical ways of reducing violence, let alone terrorism.

Which brings us back to Trump. He thinks Republicans who are appalled by his inflammatory statements are weaklings. But he is the one who got buffaloed by the combined push from the liberal media and grandstanding Democrats into saying he would back a proposal that, in the eyes of his loyal NRA allies, chips away at Second Amendment rights without doing much if anything to make the country safer.

Much of what Trump has said after Orlando—doubling down on the Muslim travel ban and insinuating that President Obama was not interested in fighting terror—has been unhelpful. But he was right to assert that Democrats were wrong to try and change the subject from the threat from Islamist terror to their favorite gun control hobby horse. Yet by flipping on this issue without knowing enough about it to acknowledge the concerns that conservatives have raised, he undermined Senate Republicans.

Trump may think he’s tougher than other Republicans but he proved to be an easy mark for the gun control shadow game. 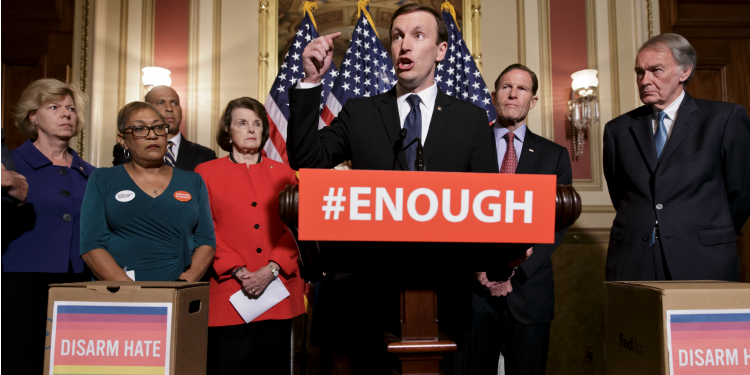