Yesterday’s session at the U.S. Supreme Court was one of the day’s biggest stories and got extensive coverage in the mainstream media. With the court holding its first public sessions since the death of Justice Antonin Scalia this week, the focus was not so much on the question of whether his absence would change the dynamic among the judges as it was on whether the remaining eight on the bench would issue a decision that would substantially affect the right to have an abortion. The oral arguments that were heard in the case of Whole Woman’s Health v. Cole were minutely dissected as reporters sought to discern whether the justices were prepared to strike down a Texas law that sought to impose regulations on abortion clinics, which the pro-choice movement claims is a thinly disguised attempt to ban the procedure.

But there was one word missing from almost all of the stories broadcast or printed about the case in the mainstream media: Gosnell. Few in the media bothered to ask whether the case of Kermit Gosnell or other scandals in the abortion industry that centered around the mistreatment of patients or the harming of infants born alive in late term abortions motivated the Texas legislators. This omission doesn’t merely highlight the ever-present factor of liberal media bias but a callous lack of concern on the part of the abortion industry and its press cheerleaders about genuine health risks that transcend the usual divide between pro-choice and the pro-life factions.

With few exceptions, that was the focus of most of the coverage of the case throughout the media. Taking their cue from supporters of the clinics, the story line turned on what was depicted as a shameless effort to impose unfair burdens on abortion providers with no justification. The Texas law requires that clinics have the same building, equipment, and staffing standards required by hospital surgical centers, as well as insisting that doctors that work there have admitting privileges at a local hospital. In most press accounts, these measures were depicted, as lawyers and the liberal justices contended, as pointless regulations that had no purpose other than to try to drive most of the clinics out of business and, thus, make women travel great distances to find a place to have an abortion. Over and over again, stories about the case in both the broadcast and print media asked why abortion should be regulated in this way when plastic surgery cases were not.

The truth is, we don’t really know the truth about whether the regulations will really bankrupt abortion providers or impose genuine hardships on those seeking the procedure. As this article in the Washington Post noted, there is very real data about whether the implementation of these regulations led to a decline in the number of abortions performed in Texas. Talk of great distances needing to be driven to clinics was often taken out of context because, outside of urban areas, one often has to drive great distances to get to any health care facilities in the state’s vast rural areas. The evidence presented about the hardships imposed, as the piece, which is sympathetic to the clinics, states is largely anecdotal. Even more to the point, there is very little reporting about why those who own abortion clinics are so reluctant to raise the health standards at their facilities or whether their decision to close rather than comply with the regulations has more to do with profits than anything else.

That said there is little doubt just as the pro-choice side opposes any restrictions or regulations about abortion, pro-lifers back anything that might make it harder to get one. The two sides are locked in a zero-sum game that, like the debates about gun control, often sideline Americans who see merit to both sides of the argument and find themselves in the mushy middle on the issue. Press coverage of this case and even some of the questions from the liberal justices during the oral arguments reflect this mindset.

But it is important to remember that when this law was passed in 2013, the discussion about abortion was not about whether it was advisable to make women drive longer distances to get one but whether they were taking their lives in their hands when they trusted their health to abortion providers. The focus then was on the case of Dr. Kermit Gosnell, a Philadelphia doctor whose negligence killed at least one patient and at whose clinic infants born alive during late-term abortions were killed. Though much of the national media tried to ignore that murder trial, it nevertheless managed to transfix many Americans regardless of their position on Roe v. Wade. The testimony at the Gosnell case not only spoke to the butchery that went on at his clinic under the rubric of “women’s heath care” but also to the willingness of the abortion industry to countenance late-term procedures that were little more than infanticide.

Moreover, the Gosnell case wasn’t the only scandal involving abortion providers. In Texas, questions were also raised about whether late-term procedures conducted at a Houston clinic involved some of the same abuses that characterized the Gosnell case. Though no indictments were ever handed down in that case despite reports of similar behavior, there is no question that worries about a cavalier attitude toward the safety of women motivated the Texas legislature to raise standards at abortion clinics to the same as its citizens demand at other medical facilities. Despite the dire predictions of the pro-choice crowd, doing so does not invalidate the right to abortion that the court invented in Roe.

You don’t have to agree with all of the opinions of the pro-life defenders of the Texas law to understand that the attempt to cast the abortion industry in the role of victim in this case is a distortion of the truth. As we learned last year with the Planned Parenthood videos, abortion providers can sometimes play fast and loose with both the law and ethics.

No matter how the Supreme Court decides this case, coverage of the issue that fails to take into account these concerns distorts the debate in ways that undermine democratic discourse on a divisive issue. 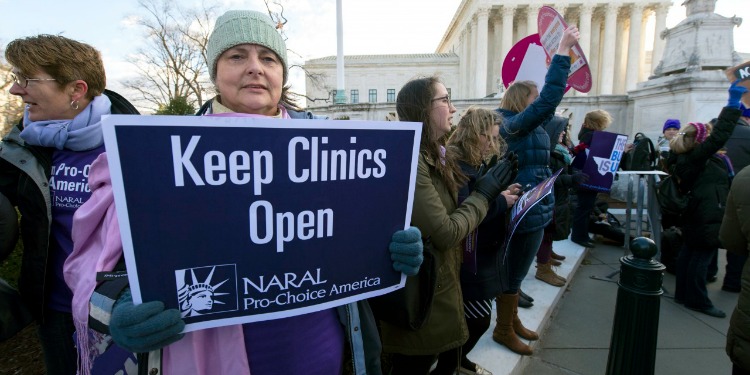