If you’ve been watching national political conventions your whole life hoping to someday see something dramatic and historic, Wednesday was the day you’ve been waiting for. By walking into the coronation of Donald Trump and pointedly refusing to give him even a tepid endorsement, Ted Cruz gave us one of the most memorable moments in modern American political history as the nominee’s supporters showered him with boos. Not since Nelson Rockefeller was shouted down at the 1964 Republican convention for chiding Barry Goldwater supporters over their refusal to condemn the far-right extremist John Birch Society has America seen anything like the scene in Cleveland.

The safe move for Ted Cruz would have been to offer a bland endorsement of Trump in the same manner that many other former presidential candidates have done. That would have allowed him to avoid being blamed for hurting Trump after he lost and made it easier for him to begin his quest for the Republican presidential nomination in 2020 without baggage from 2016. But having established his reputation as a man who would never go along to get along in Washington, Cruz still has no appetite for compromise. He didn’t just fail to give Trump even a tacit endorsement. He said Republicans should vote their consciences, something that could be interpreted as giving his blessing to those who won’t vote for Trump.

In doing so, he laid down a marker for the future in which he could say that at a moment when other Republicans were drinking the Trump Kool-Aid, he refused to bend the knee to someone who is unworthy the presidency. That reinforces the narrative he’s been trying to build ever since he won his Senate seat as the only man of principle and honor in a field of careerists and compromisers. But he has also now further embittered a political feud with Trump supporters that will cast a shadow over his 2020 hopes and might ensure he never wins the nomination he so covets.

Why in the world did the Trump campaign give Cruz the opportunity to sabotage another night of their convention, especially if, as Trump said afterward on Twitter, he had seen a copy of Cruz’s text? Perhaps it’s because Trump thought Cruz’s actions would generate some personal sympathy for him. Even some Republicans who despise Trump think Cruz was showing bad manners and being a sore loser. Or maybe it was a calculated decision by a showman who liked the idea of allowing the evening to turn into a melodrama. But it also stepped all over the strong acceptance speech given by vice presidential nominee Mike Pence, who became the afterthought on what should have been his big night.

Cruz is being blasted for not abiding by the pledge he and the other 16 GOP candidates made a year ago to back the eventual winner of the nomination. His stand will also be seen as yet another indication of his vanity and unwillingness to be a team player who will give Republicans at least the pretense of party unity they wanted. He’ll be accused of doing this solely out of personal spite because of the insults and lies Trump told about the senator’s family. Others will also point out, with justice, that Cruz spent the first six months of the campaign sucking up to Trump before the billionaire began a smear campaign against the man he saw as his main competition.

But Cruz’s calculation is that when the dust settles there will be only one question to be asked of any Republican: did you support a candidate that you know is unfit for the presidency or did you do the expedient thing and endorse him. Expediency is the only word to describe Marco Rubio and Scott Walker’s praise for Trump since both have just as much reason to stick to their evaluation of the nominee as a con man, a compulsive liar, and opponent of the principles that Republicans claim to uphold. That this came on the same day that Trump told the New York Times the U.S. “has no right to lecture other countries,” proposed to betray our NATO allies, and hinted he might not defend them against Russian attack (statements that contradicted the foreign policy stands articulated Wednesday night by both Pence and Trump apologist Newt Gingrich) makes the surrender of Republicans who ought to know better seem even more disgraceful.

Even if Trump loses in November and he probably will, his fans will remember what happened this week and will hound the Texas senator to his dying day for snubbing their hero.

Establishment Republicans, most of whom are probably secretly envious of Cruz for having the courage to do what they would have loved to have done, will also damn him for not helping the party. They’ll blame Cruz for helping elect Hillary Clinton, though if that happens, it will be the result of Trump’s alienation of minorities, young voters, and women more than anything any Republican said or didn’t say about him.

But in the end, where you stand on Cruz’s astonishing chutzpah will depend on what you think the great moral question of 2016 will be for Republicans. If you think Hillary Clinton must be stopped even if it means electing a racist, protectionist and isolationist bully who is running to the left of the Democrats on some issues, you’ll say Cruz was wrong. But if you believe that history will judge Republicans on whether they had the intestinal fortitude to stand up against Trump, then Cruz’s chutzpah will be vindicated even if it means his chances of someday winning the Republican presidential nomination were diminished. 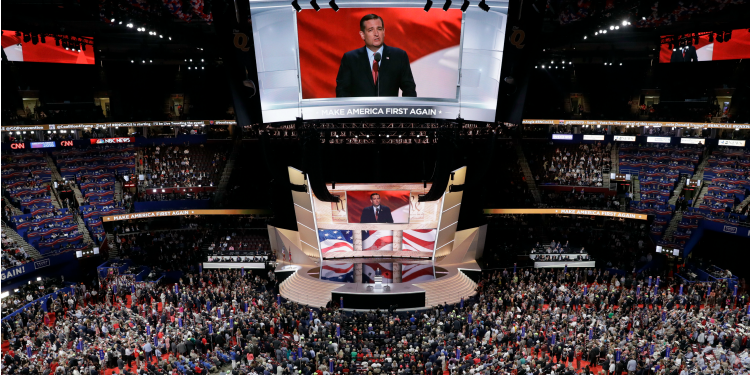