It was a moment those of us watching won’t soon forget. CNN’s Anderson Cooper was looking for a target at which to aim his anger over the horrifying crime at the Pulse nightclub in Orlando. But his target wasn’t the shooter, or anyone remotely associated with the Islamist groups with which he identified. It was Florida Attorney General Pam Bondi, who was on the air in her capacity as a law enforcement official and said plainly that violence directed at gay Americans would be prosecuted to the full extent of the law.

Cooper did not question her about what was being done to protect gays, such as those 50 people who were slaughtered by a terrorist who proclaimed his Islamist sympathies. Instead, he attacked her for having defended Florida’s law against gay marriage before the U.S. Supreme Court, which then overruled all such laws around the nation. It was an uncomfortable few minutes. Despite her consistent effort to steer the conversation back to the victims, Cooper never let up. He was determined to portray her as an enemy of the LGBT community, of which he is himself an open and proud member, and to portray her as unworthy to comment on the terror attack in her state.

Faced with a terrorist atrocity in which radical Islam had clearly played a key role, Cooper preferred to pivot in such a way as to portray mainstream religious conservatives as the villains, if not unindicted co-conspirators, in the crime.

The same sort of spirit could be detected in a New York Times editorial that spoke of “The Corrosive Politics that Threaten L.B.G.T Americans” in the wake of Orlando. The editorial disingenuously claimed that the insecurity gay Americans must feel after Orlando didn’t “happen in a vacuum” and in essence claimed that resentment toward efforts to enforce new laws invalidating traditional notions about who could enter men’s or women’s restrooms was somehow responsible for an atmosphere of hate that inevitably led to Orlando.

The gay community is right to feel threatened by what happened in Orlando. Moreover, if they choose to harbor resentment against those who opposed gay marriage in the recent past (a category of persons that up until the last couple of years embraced a consensus that stretched across the political aisle and included Barack Obama and Hillary Clinton, as well as conservatives), that is their right. They are also free to regard opposition to the Obama administration’s position on transgender bathroom access—a position shared by half the country, according to polls—with dismay. But even as we express solidarity and sympathy for the victims in Orlando and as the entire LBGT population in the wake of this horrible atrocity, it’s also necessary to point out that even the most conservative Christians in this country are condemning this crime. If the gay community or those who purport to speak for them reject that sympathy, they are missing an opportunity to build bridges that would be beneficial to both sides.

It is true that gays are being targeted for violence in 2016, but the people attacking and killing them are not evangelicals or conservatives. They are Islamists. It is ISIS that is persecuting homosexuals, throwing them off rooftops, or executing them in other terrible ways. It is that strain of fundamentalism that is waging war on gays and, whatever the personal proclivities or problems of Omar Mateen, the voices that he heard and read urging him to this crime were Islamist preachers of violence, not American conservative critics of gay marriage or transgender bathroom policies. To pretend anything else or to infer some sort of connection is not only false; it is exactly the sort of polarizing political warfare that has so degraded public discourse in 2016.

This is a moment that ought to be one that all decent persons can use as a reminder that the gay victims in Orlando should never be seen as the “other” but merely fellow Americans whose rights and safety are being threatened by a vicious theocratic ideology that also takes a dim view of Christians, Jews, and Western democracy. To shift our view from that to refight culture wars that have already been decided does neither the gay community nor the country any good—and in fact a good deal of harm. 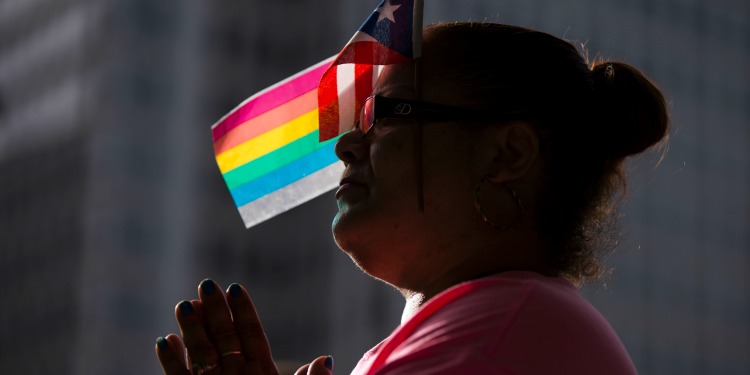