For all of Bill Clinton’s legendary appeal as a charming public speaker, his “I met a girl” speech at last night’s convention will be remembered far more for what he didn’t say.

When it came to telling their private story, the 42nd president’s pointed omission of even a mention in passing of the very public crisis in a marriage about which most Americans already think they know too much echoed throughout the speech.

We’re all entitled to be the heroes and heroines of our own novels and, if this is the story the Clintons want to tell their grandchildren, so be it. The rest of us are aware of the complicated nature of their marriage. Though her husband gave us a detailed history of their courtship and early years together, he prudently failed to mention his very public infidelities and the fact that during his presidential campaigns and then during the Monica Lewinsky affair, her willingness to stand by him was the key factor in allowing him to survive.

We will be told that this is ancient history and that there is no need to re-litigate his perjury or Hillary’s willingness to back him up. But if we are now obliged to listen as Bill ably takes on the part of the faithful adoring spouse, it can’t be considered in bad taste to bring this up. The more he tries to divert us from the facts, the easier it is to remember that the relationship in question long ago took on the aspect of a cold political alliance in which her loyalty now obliges him to work for her election. Ironically, just as Donald Trump’s children were tasked with providing an alternative narrative for the Republican candidate’s well-known private life, so, too, did Bill Clinton try to give us a new version of a story that most already tired of hearing long ago.

It is a bit much to ask us to ignore what we know and instead buy into the fairy tale the former president was peddling. The same is true for the clever attempt to pitch this veteran political player and officeholder as an “change-maker.” Whatever one may think of her opponent—and I take a dim view of Trump—any effort to deny that Hillary is the status quo candidate of 2016 ranks up there with Bill’s “I didn’t have sexual relations with that woman, Miss Lewinsky” in the pantheon of Clinton falsehoods. The same is true of the effort to depict her four years as secretary of state as one of unrivaled success when in fact she presided over the unraveling of the Middle East and one of the great tragedies of the last half century in Syria and the revival of Russian imperialism (“reset”).

The Clintons have been part of our public conversation for 24 years. The notion that they can re-sell themselves to the public is a comforting delusion for Democrats. If most voters don’t trust the Democratic nominee, and they don’t, it isn’t because they don’t know the real Hillary or are buying into a lie as her husband insists. Her problem is that we know her all too well. Her deceptions and the casual corruption of the conflicts of interest, which were created by their family foundation that has helped make them a very rich couple, is not a secret. Nor is her obsessive secrecy (already on display when she was first lady when she sought to remake health care out of public view) and willingness to repeatedly lie about her misdeeds. It’s not for nothing that even some Democrats took up the “lock her up” chant this week.

Bringing these facts to light is not a “cartoon,” which is the word the former president used to dismiss attacks on his wife. It is the unvarnished truth that no amount of romanticization of her will bury. Americans will make up their own minds as to whether her frauds are less odious than those of Donald Trump. 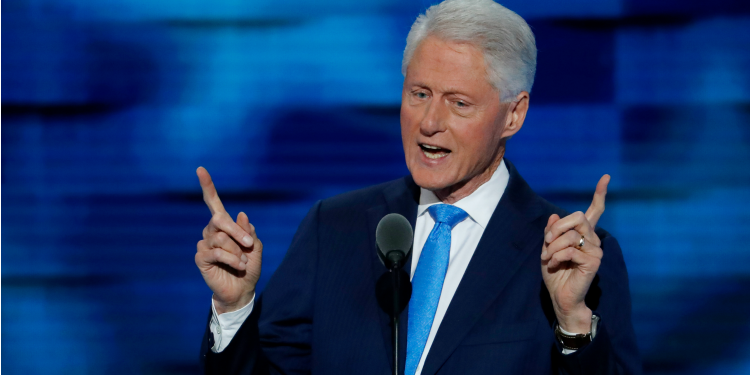