Hillary Clinton has long had good reason to like Donald Trump. The real estate mogul-turned-reality TV star-turned-Republican presidential candidate was a major donor to her campaigns for the Senate. He also gave $100,000 to the thinly-disguised political slush fund that is the Clinton Family Foundation, giving him the unique status as both a potential Hillary opponent and an enabler of the Clinton Cash scandals. But the former First Lady has even more immediate reasons to be grateful to The Donald. Trump’s domination of the news cycle the last few weeks has not only sucked all the oxygen out of the room for other Republican candidates. The relentless coverage of his every move and outrageous statement has also had the effect of obscuring the slow motion implosion of her presidential campaign. Had he stayed on the sidelines to kibitz as he has in previous election cycles, it might have been Hillary’s horrific poll numbers and her increasing weakness against an implausible Bernie Sanders candidacy might be leading the cable news shows. Instead, we’re treated to daily analyses of Trump putdowns of fellow Republicans and coverage of his appearances as if they were global summits. If this keeps up — and at this point, there’s no reason to think it won’t — Hillary may be able to ride out the summer and the fall without too much attention being paid to her troubles.

There’s no point denying that Trump is the most entertaining presidential candidate we’ve had in a long time even if he’s also the least thoughtful and most vulgar. Every Trump event, such as the chaotic dog-and-pony show he put on at the border in Laredo, Texas yesterday, is transformed by the sheer unpredictability of his behavior into a global news event covered obsessively by the cable news networks. The same goes for every interview as pundits and journalists wait for Trump to insult one of his GOP rivals or to hint, as he has this week to the horror of his party, that he might run as a third-party candidate next year if the Republican National Committee offends him with “unfair” treatment.

For the moment, all this has the effect of leaving all the more credible would-be GOP opponents of Hillary flailing in frustration at Trump’s antics, insults and ability to rise in the polls. The more they hit back the more Trump likes it since it feeds his image as a “fighter” who is out to knock off a failed political establishment. But the cooler heads among them have to know that it can’t last. Sooner or later, Trump is going to start being scrutinized the way presidential candidates are examined and his record of support for liberals and liberal causes will start to take the air out of his balloon. Trump’s negatives are too high to allow him to be a legitimate threat for the nomination let alone the general election. Republicans should also be confident that his buffoonish persona is also bound to trip him up enough times to ultimately undermine any notion that he ride the support of a populist surge and anger about illegal immigration to the nomination.

But the help all of this is giving to Hillary is priceless. Trumpmania has enabled her to fly beneath the radar even when she weighs in on hot button issues. Her defense of Planned Parenthood in the face of their infant body parts sale scandal may impress the liberal base of the Democratic Party, but it also exposes her to attack. Yet no one is talking about Hillary allowing her to get away with continuing to refuse to talk to the press.

More important, the Trump factor has also almost silenced discussion of Hillary’s toxic poll numbers in battleground states against possible GOP opponents as well as the terrible results she gets on whether people trust her. In a normal political year, this would become the number one story lending further momentum to the surprisingly effective challenge to her coronation by Senator Bernie Sanders or even tempting other more plausible candidates like Senator Elizabeth Warren or Vice President Joe Biden into the race.

Clinton also has to hope that Trump is so enjoying the ride he’s on that he won’t want to get off even when he fails to win primaries next winter and spring. It’s easy to imagine Trump manufacturing some feud with the RNC and attempting a third-party run next summer and fall. Of course, that would be the ultimate favor for Hillary and the Democrats since it would more or less guarantee her election as president no matter how weak a candidate she proved to be.

The extension of the Trump campaign well into 2016 is the ultimate nightmare for Republicans, but there is little they can do about it other than to try and ignore him and hope, as they should, that the overwhelming majority of voters reject his brand of faux conservatism. In the meantime, he will continue to give aid and comfort to the Clinton campaign that is far more valuable than his past financial support for their fake charity or her Senate campaigns. 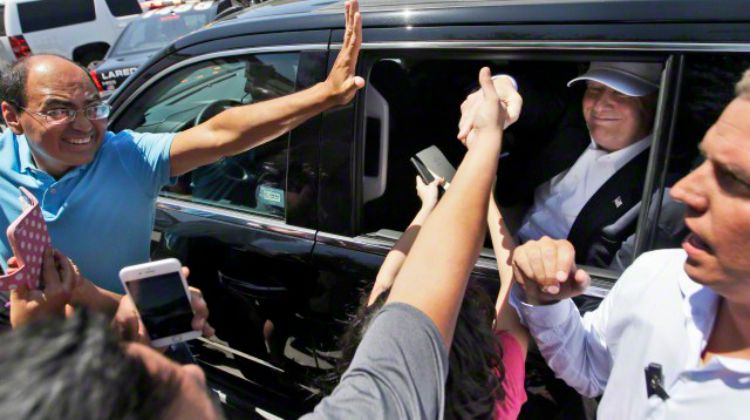