The Trump campaign may or may not be falling apart this week as it struggles to explain their candidate’s determination to vent his spleen at a Gold Star family, alleging that the election will be “rigged” against him, making absurd remarks about getting a veteran’s purple heart, picking fights with Republicans who have endorsed him, fire marshals, and even a crying baby. And that’s forgetting last week’s “sarcastic” support for Russian hacking of the Democrats. Trump seems incapable of staying on message for more than a single speech or a day, let alone focusing on Hillary Clinton’s lies, a faltering Obama economy and even the latest details about the cash-for-hostages aspect of the Iran nuclear deal that he rightly opposes.

But, for a moment, let’s not be distracted by all the craziness that Trump stirs up and instead focus, as his followers keep asking us to do, on the issues. But if we do, then those conservatives that he has worked so hard to alienate in recent days find little reason to rally to his side.

Yesterday, Trump spoke on the Fox Business Network about his plans for the economy and what he said ought to sound very familiar to both liberals and conservatives. He advocated a massive increase in federal spending on infrastructure that would cost anywhere from $800 billion to $1 trillion. Trump calls this a jobs program that will put America back to work. But if you ignore the rhetorical flourishes and stick to what he is actually advocating and how he proposes to pay for it you can call it by another name: stimulus.

It was only seven years ago that the newly elected Barack Obama got a Democratic-run Congress to approve his plan to revive the economy. It cost around $800 billion and was supposed to provide “shovel-ready jobs” that Americans needed. It was supposed to be paid for by “Build America Bonds?” How did that work out?

Not that well. As the economy began an anemic recovery from the 2008 crash, the only thing stimulated by Obama’s stimulus was the size, reach and power of the federal government. Republican critics had pointed out that government can do a lot of things but in the long run only the private sector can build the economy and federal intervention always creates unintended consequences. They were right. That’s why opposition to Obama’s stimulus was, as much as the administration’s push for ObamaCare, the driving force behind the creation of the Tea Party in 2009 and 2010.

The plan is in keeping with Trump’s well-known affection for debt. But while he supposedly made fortunes on leveraging debt, the taxpayers on the hook for another trillion added to the federal debt won’t make a dime from it. Though Trump claims he can reduce the deficit (though he has yet to reveal how it could be magically achieved via the increased spending and lower taxes he promises), the infrastructure spending would increase it if the federal government actually deployed that money. And that’s even before we take into account the fact that the wall that he says he will build will be paid for by Americans one way or the other (either via increased taxes or the costs of goods that will be heavily taxed and tariffs on our exports in Trump’s planned trade war) not the Mexicans.

So the question for Trump acolytes who now pose as the arbiters of what it means to be a conservative, what is it about Trump’s stimulus that makes should make it more acceptable to Republican voters than Obama’s?

The answer is nothing. In fact, on this point, Trump is actually running to the left of Hillary Clinton, who, amid a laundry list of big-ticket liberal spending plans in her acceptance speech last week, only plans to spend $275 billion on infrastructure.

There is an infrastructure problem in this country but the notion that it can be solved by a massive increase in federal spending has always been an article of faith for liberals, not conservatives. Moreover, the beef against the Republican Congress that was given landslide victories in 2010 and 2014 by outraged voters was that it was too weak in opposing more Obama spending. But what some of the same voters have now done is to channel that anger into nominating someone who wants to outspend the Democrats. I’ve yet to hear a rational explanation for that fact.

If some conservatives find themselves unable to back the GOP candidate it is not because they are closet liberals all along but due to the fact that many of the positions taken by the Republican nominee are actually to the left of the Democrat. When it comes to spending and foreign policy, what Republicans have done is to choose someone who is, for all of his rhetorical attacks on the president, closer to Obama than Clinton. Of course, Clinton has chased Sanders voters far to the left on many other points. But the same is true of Trump. On this issue, as on his appeasement of Russia, protectionism and isolationism, Trump is the same big government liberal that he’s always been, albeit with a generous helping of authoritarian intolerance thrown in for good measure. If many of those who cheered the revolt against Obama’s stimulus find themselves in a quandary as to how to vote this November, it’s because their choices are sadly limited to two shades of liberalism. 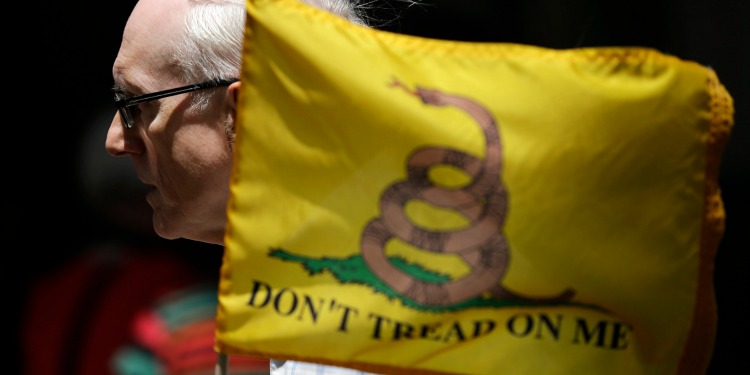