The umbrage industry on the left is good at manufacturing incidents in which people they don’t like get accused of making racist, anti-Semitic, or otherwise hateful incidents. The statements in question aren’t usually offensive in of themselves, but because of some keyword is supposed to silently signal prejudice. It’s usually nonsense but tends to confirm a worldview in which all non-liberals are guilty until proven innocent of bigotry.

Yet as much as we rightly decry the indiscriminate use of such labels, there are such things as dog whistles in politics and the entire nation heard it loud and clear on Sunday when Donald Trump refused to disavow the endorsement of racist David Duke and the Ku Klux Klan or to condemn the group when asked about it on CNN’s “State of the Union” Sunday morning program. Though later Trump issued a one-word statement “disavow” on Twitter, the message had been sent to fringe elements around the country, and especially in southern states where Super Tuesday primaries will be held this week: Trump is your candidate.

That Trump’s answers, when probed about it by CNN’s Jake Tapper, were a cynical attempt to create some ambiguity about his stand on the Klan is not in doubt. Trump had condemned Duke as a racist as far back as 2000. Moreover, though he may be a political novice, he has not been living under a rock for the first 69 years of his life. He knew very well who Duke was and what the Klan stands for. Yet this is what he said on CNN:

JAKE TAPPER, CNN: I want to ask you about the Anti-Defamation League, which this week called on you to publicly condemn unequivocally the racism of former KKK grand wizard David Duke, who recently said that voting against you at this point would be treason to your heritage.

Will you unequivocally condemn David Duke and say that you don’t want his vote or that of other white supremacists in this election?

TAPPER: But I guess the question from the Anti-Defamation League is, even if you don’t know about their endorsement, there are these groups and individuals endorsing you. Would you just say unequivocally you condemn them and you don’t want their support?

TRUMP: Well, I have to look at the group. I mean, I don’t know what group you’re talking about.

You wouldn’t want me to condemn a group that I know nothing about. I would have to look. If you would send me a list of the groups, I will do research on them. And, certainly, I would disavow if I thought there was something wrong.

TRUMP: But you may have groups in there that are totally fine, and it would be very unfair. So, give me a list of the groups, and I will let you know.

That Trump was lying is not in question. The question is why he would lie about something like this? His supporters may think it is unfair to hound him with questions about the opinions of a crackpot like Duke. But Trump could have easily ended the discussion with a clear disavowal and condemnation of the Klan and any other associated racist group. But he didn’t. He feigned ignorance and refused to say anything about an organization that looms large in American history and is a byword for racism and violence. Trump is many things, but he is not a stupid man. Every word he utters is said for a reason. The reason here isn’t hard to figure out. He was aiming not for the few extremists who belong to the Klan but to a larger group of people who may sympathize with them or harbor racist sentiments. He wants their votes in the worst way, and this is what he’s willing to do to get them.

That he later covered his tracks with a meager Twitter response was meaningless. The dog whistle had been sounded.

Faced with a firestorm on Monday morning he blamed the whole thing on a faulty earpiece and said that all he had heard Tapper say was “groups.” But as the transcript shows, he heard the words David Duke so he knew exactly what he was being asked. That means the earpiece excuse is, like so many other things that Trump has said during the campaign, an obvious lie.

Let’s specify that among Trump’s supporters are many decent, good Americans who mean no ill against their fellow citizens. Many of them seem to like him because he has been able to articulate their anger about the failures of government. They also love his willingness to push buttons and be politically incorrect at a time when much of our discourse is paralyzed by the need to accommodate the desire of some to avoid hearing anything they find offensive or even disagree with. Their impatience with that element of our culture is understandable. Their belief that this is an excuse to support someone whose candidacy is built on empty slogans about restoring greatness and con games, such as making Mexico pay for a war on our southern border, is less defensible.

Trump has pushed the envelope in many ways recently. On Friday, he spoke of redefining the libel laws in order to make it easier for celebrities like himself to punish those who attack them. “Hit pieces” by journalists — i.e. anything that doesn’t feed Trump’s enormous ego will be made illegal though it is possible that Trump isn’t aware that he’ll have to go around the Supreme Court to do so. He also took flack for retweeting a quote of fascist dictator Benito Mussolini and neither disavowed the quote or the obvious comparison with his own authoritarian instincts. These will, no doubt, be excused by his followers as just Donald being Donald.

But dancing around questions about the Ku Klux Klan is not a matter of pushing the buttons of liberal cultural elitists. Being asked to condemn racist violence and lunatic anti-Semites like Duke is not a difficult question. It is the political equivalent of getting a few points on a test for writing your name at the top of the paper. Refusing to do so sends a message, not about a willingness to push the envelope on speech, but to tell us that the candidate is encouraging support from racists.

While candidates can’t be asked to be accountable for everything their supporters say, Trump’s disgraceful tap dance around the Klan question makes the kind of hate — both racist and anti-Semitic — that seems to emanate from some of his backers on the Internet fair game for comment.

This would be a disqualifying moment for any other presidential candidate in any other year, but it would be foolish to think that Trump will be hurt much by this. But his opponents that are pointing out that this sort of thing makes Trump unelectable in November are probably right. The notion that he can ride to the populist on a populist tide of resentment against government was a plausible theory especially against a weak Democrat such as Hillary Clinton. But Trump’s race dog whistle makes it clear that if the Republicans nominate him for president — and it will take a massive reversal of fortune in the next 15 days to prevent this from happening — then they are setting themselves up for a Barry Goldwater-style landslide defeat of epic proportions.

While Trump is whistling to fringe elements to turn out to win him delegates on Super Tuesday, Republicans who would like to avoid associating the party of Lincoln with such a disgrace must understand that the signal he’s sending is also for them. 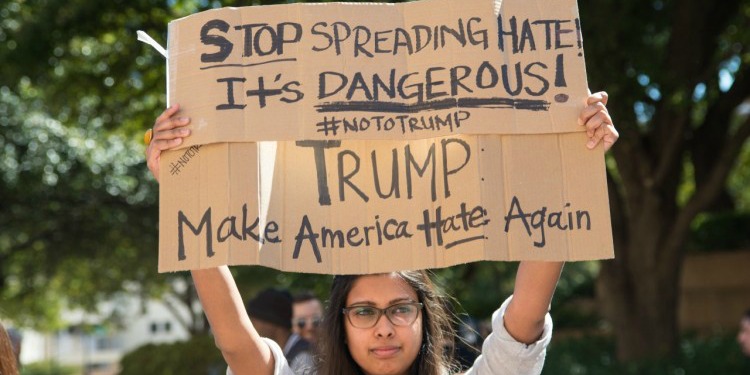