If Hillary Clinton thought her takedown of Donald Trump in a foreign policy address given yesterday in San Diego was going to have much of an impact on anyone but her own supporters, she was wrong. It was well delivered (no screaming), a rare example of Clinton showing some humor and clearly her best speech of the campaign. The sections devoted to excoriating Trump were also devastating and largely accurate. But the reaction from many conservatives reflected the stark partisan divide that has already, to the surprise of some who thought Trump couldn’t rally most Republicans behind him, characterized this race. For the most part, the right responded with a collective, “so what?” to Clinton’s attempt to show that Trump wasn’t a man to be trusted with nuclear weapons, let alone the day-to-day agonizing decisions required for a president to navigate the country’s foreign and defense policy dilemmas.

Part of their response was to point out that Clinton’s own record of foreign policy failures disqualifies her from making an effective critique of Trump. There is merit to that argument. But like the candidate’s own response, most had nothing to say with respect to specific criticisms of Trump. Instead, many dismissed her attacks by comparing it to the disdain Jimmy Carter and many liberals expressed for Ronald Reagan in 1980. Their reasoning seems to be that since Carter thought Reagan was too shallow and ignorant to conduct foreign policy or to keep the country out of a third world war, then the analysis of Trump’s prospects should be just as suspect. Moreover, they claim that Trump is like Reagan in his desire to overthrow the political and foreign policy establishment and that means all the complaints about the presumptive GOP candidate should be ignored. But while there are certain superficial comparisons to be made between the two, the analogy is ridiculous. There may be arguments to be made for Trump and strong critiques for his supporters to hurl at Clinton. But the comparison between Trump and Reagan is absurd. They are nothing like each other, and that is especially true with respect to foreign policy.

It’s true, as Trump’s defenders claim, that Reagan was widely scorned by the liberal mainstream media as a dim-witted actor just as the GOP candidate’s critics trash him as a reality TV star. Let’s also concede that both men were attempting to overturn foreign policy paradigms. Reagan was seeking to halt a generational retreat with respect to communism and the Soviet Union and to rebuild American strength with a sense of confidence in the country that was completely lacking during Carter’s malaise. Trump is also seeking to radically change things by reverting to a more isolationist approach to foreign policy in which alliances would be downgraded if not abandoned (NATO), enemies appeased (Russia), and basic principles like non-proliferation would be abandoned (letting Japan go nuclear). Some, like K.T. McFarland, who served in the Reagan administration, go as far as to declare that this shows that Trump shows wisdom by seeming assert that everything both George W. Bush and Barack Obama have tried has failed.

But while that can be made to sound as if Reagan and Trump are on similar crusades driven by people power, the analogy falls flat and for the exact reason that Clinton pinpointed. The basic problem here, as Reagan scholar Paul Kengor noted in a piece published in The American Thinker last month, is that while the conventional wisdom about the 40th president was wrong, it is, alas, all too true when it comes to Trump.

Trump’s lack of detailed or even the most superficial knowledge regarding foreign and defense policy has been made painfully obvious over the course of the campaign. Nor has he shown the least interest in studying issues more closely. The detailed foreign policy interviews that he conducted with the Washington Post and the New York Times revealed a man who had clearly never given most of the life and death issues facing the country much serious thought. That’s why his positions constantly change. He has a good salesman’s lack of shame when it comes to denying previous statements, but they remain on the record.

By contrast, Ronald Reagan really did know what he was talking about. He was decades removed from his previous career in acting and, before taking the oath of office, had spent the previous 20 years studying policy and writing, not to mention getting experience running a government by serving eight years as governor of the country’s largest state. Part of his political genius was that his foes underestimated him. But he was a man who could stand toe-to-toe in a confrontation with the leading public intellectual of his time on a complicated foreign policy issue — he debated William F. Buckley on the question of whether the U.S. should surrender the Panama Canal — and more than hold his own.

Even more importantly, Reagan’s positions on foreign policy were not off-the-cuff superficial observations but rooted in ideas. Trump disdains ideology and principle. Flexibility (we’d call it flip-flopping if it were anyone else) is the main element of all of his positions. That is why they are so wildly inconsistent if not completely contradictory (i.e. pledging to kick ISIS’s ass while simultaneously withdrawing from the Middle East and abandoning Arab allies). Reagan was just the opposite. He had thought deeply about what was wrong with American economic and foreign policy and written about it. He was certainly intent on throwing out the liberal establishment’s faith in détente with the Soviet Union (which even Carter had abandoned by the time he had left office), but that was a plan that was built on a solid intellectual foundation, not a knee-jerk or emotional appeal to nativism. Reagan may have been thinking outside the box as far as liberal pundits were concerned, but his stand was firmly within the internationalist tradition of American foreign policy thinking. Trump’s attempt to channel the “America First” isolationism of Charles Lindbergh and his followers has nothing in common with Reagan’s approach.

Let’s also not forget that in foreign policy, as in the rest of politics, style is often substance. The contrast between Reagan and Trump as men is crystal clear. Reagan was a man of grace and charm. He treated everyone, both friend and foe, with respect. He was the author of the 11th commandment that cautioned Republicans against attacking other members of their party. He never responded to criticism in kind but smiled and rose above disagreements. This was essential not only to his political success but also to his ability to rally foreign allies and to deal smartly with foes from a position of strength.

Trump has none of these qualities. If fears about him starting a nuclear war in a fit of pique are overblown, they are nevertheless understandable because he is a man who seems to have no limits or guard rails on his thinking or speech when angered. He responds to all criticism with rage and abuse. Perhaps he will be the master dealmaker in the White House, but he may also be out of his depth and handicapped by an irascible, thin-skinned personality that cannot adapt to the differences between being a real estate mogul and the leader of the free world. Worries about him being unfit for the presidency aren’t, as they were with Reagan, a function of liberals thinking that all conservatives are evil and stupid, but rather a natural reaction to his behavior and lack of knowledge. Whatever else may be said of Trump, the one thing we do know about him is that he is the ultimate anti-Reagan.

The fact that the Reagan-Trump analogies are patent nonsense is separate from the question of whether voters should choose Clinton over Trump. Clinton may have more policy knowledge and experience and sound like more of an adult when discussing these issues. But she is also the author of the comical reset with Russia, a defender of an indefensible Iran nuclear deal (the weakest portion of her San Diego speech), and is associated with the worst failures of the Obama administration. If Trump must account for his ignorance and foolish policy positions, she must answer for Syria, Libya, the Benghazi lies, and the withdrawal from Iraq that led to the rise of ISIS. There is also the question of her ethics both with regard to the conflicts of interest with her family foundation and the email scandal.

Voters are entitled to come to their own conclusion about which of these two candidates is the lesser of two evils. But Clinton’s shortcomings are no excuse for Trump’s ignorance and willingness to burn down the sturdy edifice of international strength that Ronald Reagan built. If there is an argument for Trump, it must rest on something else than an absurd comparison to a great man who was nothing like him in terms of knowledge, preparation, temperament, and an unyielding belief in America’s purpose in the fight for freedom around the globe. 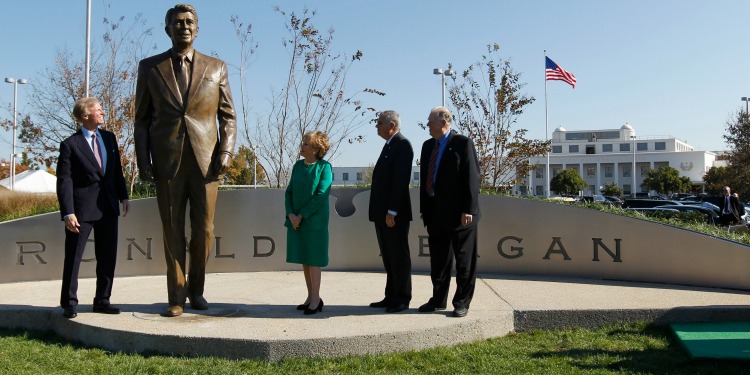