On Monday, some Democratic members of Congress and a united front of major Jewish organizations expressed outrage over the imminent prospect that the United Nations Educational Scientific and Cultural Organization (UNESCO) would vote to declare Jerusalem’s Western Wall to be a part of the al-Aqsa mosque. That one-sided resolution was proposed at the UNESCO executive council by six Arab nations acting on behalf of the Palestinian Authority and may be adopted as soon as Tuesday. The resolution also included a laundry list of anti-Israel measures including condemnations of Israeli self-defense against terrorist attacks as well as of the Jewish presence in Jerusalem. The certain passage of the resolution will confirm UNESCO’s moral bankruptcy and act to further incite Palestinian violence against Jews. But on the same day that some Americans were voicing outrage about what the UN agency was doing, the nation’s chief diplomat was at the group’s Paris headquarters to speak to that same executive council with a very different agenda. On Monday, Secretary of State John Kerry came to UNESCO hat in hand, praising the group and begging for the U.S. to be re-elected to the group’s executive board while not even mentioning the resolution that it would soon pass.

Kerry’s humiliating speech was not without a strategic purpose. But it also reflected the Obama administration’s ideological commitment to the United Nations. The secretary believes that the United States can do more good by remaining inside the UNESCO tent and influencing its actions than it can by boycotting. Though other administrations have refused to go on being part of the UNESCO farce when its actions have crossed the line into outright anti-Semitism, President Obama and Kerry look at the equation differently. They may formally oppose the most blatant forms of bias against Jews that are routine fare at UNESCO and most every other UN agency. Yet their worldview is so closely bound up with the world body’s global agenda that they cannot bring themselves to imagine leaving it under any circumstances, including provocations like the pending resolution on the Western Wall.

But Kerry’s Paris speech showed where the administration’s priorities lie when it comes to UNESCO as well as the Middle East.

The secretary’s big problem is that the U.S. stopped funding UNESCO in 2013. That happened because U.S. law mandated a halt to American support of the agency after it admitted the Palestinian Authority as a full member state in violation of both international law and American warnings. The U.S. used to supply 22 percent of UNESCO’s budget and now owes over $300 million in back dues. That makes it highly unlikely that the UNESCO board will vote to re-elect the U.S. But that didn’t stop Kerry from flattering them and to “declare the depth of the commitment the U.S. has to this body.”

In a world in which the United States had the clout to exercise the kind of influence at UNESCO that would prevent its adoption of biased resolutions about the Middle East, such diplomatic flummery might make sense. But we don’t live in such a world. Even if President Obama and Kerry were able to find a way to contravene the law and resume the flow of taxpayer dollars to UNESCO, that wouldn’t give them the ability to stop such resolutions from passing. Though UNESCO does some worthwhile work around the world, any good it does is more than balanced by the harm it does by lending the imprimatur of the world body to anti-Semitism.

On that point, there can be no doubt or waffling from the United States. UNESCO already crossed the line from routine anti-Israel bias to anti-Semitism when it officially recognized both the Tomb of the Patriarchs in Hebron and Rachel’s Tomb outside of Bethlehem to be Muslim sites. Both Jews and Muslims revere the Hebron site, but the Ottomans and the British forbade Jewish worship — an outrage that was ended after the 1967 Six Day War. Rachel’s Tomb has never been anything but a place of Jewish worship.

But by declaring the holiest sites of Judaism to be Muslim, UNESCO will be declaring war on both Judaism and the Jewish people.

Israel continues to respect the right of Muslim worship at its mosques in Jerusalem even to the point of keeping in place a discriminatory status quo arrangement on the Temple Mount that forbids Jewish prayer. Indeed, except for that ban on Jewish prayer anywhere on the Temple Mount compound, the post 1967 period of Israeli rule is the first time in history that all faiths are guaranteed free access to worship in the modern history of the city. But instead of supporting Israel’s commitment to peace and respect for all faiths, UNESCO is backing efforts to strip the city of its Jewish identity.

The resolution declares the Western Wall to be an integral part of the al-Aqsa mosque called the “al-Buraq Plaza” after the Prophet Muhammad’s winged horse that carried him on a night journey described in the Quran. But while Muslims are free to believe this narrative, that doesn’t give UNESCO or anyone the right to declare the Temple Mount and the Wall — the last vestige of the historic Jewish Temple below — to no longer be a Jewish site. To do so is not merely discriminatory but an overt act of anti-Semitism aimed at undermining both Israel’s existence and Jewish rights. The resolution is also dangerous because it will be taken as a sign of UN approval for the current surge in Palestinian terrorism that is motivated by lies about Israel’s intentions toward the Temple Mount mosques.

Kerry knows that even if the U.S. were still funding the UNESCO farce, it would not have the votes to stop this outrage. Like the rest of the UN, despite its high-flown rhetoric about saving the world, the virus of Jew hatred is integral to UNESCO’s behavior. Yet for the Obama administration even this disgusting proposal is not enough to motivate it to outrage or at least a minimal display of American dignity. This was a moment for an American leader to call on other civilized nations to walk out of UNESCO rather than be part of such a disgraceful attack on the Jews. Instead, Kerry chose to fawn over the UNESCO board on the eve of this effort without mentioning it. Only an administration with no conception of honor could have behaved in such a manner.

Rather than reaffirming an American commitment to this bankrupt body, the message from the United States should have been to tell UNESCO that there would be consequences if it passes this resolution. Congress has done all it can by cutting off funding and not even the creative law breaking efforts of the administration has found a way to contravene that law. It will have to fall to Obama’s successor to find a way to make plain the American people’s refusal to have anything to do with an anti-Semitic UN agency. But even if that successor eventually does the right thing, the disgrace of Kerry’s humiliating exhibition in Paris should never be forgotten. 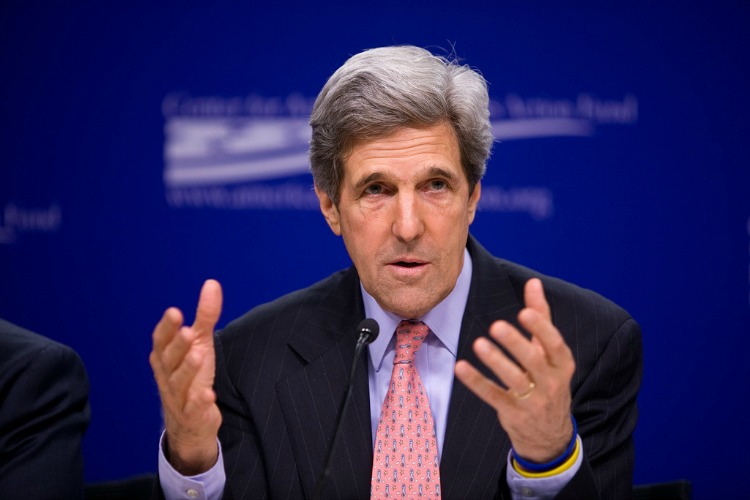