President Obama stated something that was incontrovertibly true on Saturday when he said, “America is not as divided as some have suggested.” He’s right. The awful nature of two police shootings of African-Americans last week followed by the horror of the murder of five police officers in Dallas has left some Americans feeling as if their country is falling apart. The comparison being mooted in many places was to 1968 when race riots and political assassinations seemed to drive the country to the brink of chaos. So President Obama did the right thing when he sought to use the bully pulpit of the presidency to remind us that this perception is highly misleading. As bad as the last week felt—and it felt very bad indeed—there is no comparison to that moment of crisis.

But if many Americans feel as if the nation is heading toward an abyss, it is due in no small measure to the same person who is, belatedly, trying to calm public opinion. Throughout his presidency and in particular during the last two years since the shooting in Ferguson, Missouri in August 2014, he and other administration figures, such as former Attorney General Eric Holder, have worked hard to promote a false narrative of resurgent American racism. If the president is now trying to assert that individual acts of violence, whether an arguably unjustified shooting by a police officer or a mass shooting by a disturbed individual, should not cause us to jump to conclusions about that act representing the intentions of an entire group, then it is he, as much as anyone who has encouraged Americans to think in this manner. Having helped to encourage that fundamental misreading of American society as irremediably racist despite the fact that we twice elected an African-American to the presidency, it is a little too little and far too late for him to be offering wiser counsel.

It must be understood that the Black Lives Matter movement, which has done its best to perpetuate the myth that all blacks are in danger from the police everywhere, did not operate in a vacuum. Though their hateful statements were more extreme than anything said by the president or Holder, the administration helped legitimize the now widely held belief that police are an out-of-control force that is over-militarized and inclined to murder minorities with impunity.

The closer one looks at many of the individual episodes that form the core of the racism narrative, the harder it is to fit them into a pre-existing context. Some of the iconic incidents that sent people into the streets and provoked outrage from the White House and were held up as “proof” that it is open season on blacks by cops have turned out to undermine the racism narrative. The death that set off this movement—the shooting of Michael Brown in Ferguson, Missouri—was judged by legal authorities to be justified.

To state this is not to deny that there are instances of police misconduct. Like all governmental agencies and employees, police departments and officers are fallible. But if there is a heightened sense of an adversarial relationship between police and some of the minority communities they serve, it has been exacerbated by forces like Black Lives Matter in an irresponsible manner. They have seized on every tragedy that could be possibly viewed through a racial lens and done their best to use it to promote an inchoate agenda that promoted hatred. Racism is an integral element of the history of this country and should never be ignored or underestimated. It has even reared its ugly head at times during the presidential campaign. But it cannot explain every crime or action taken by the police.

If that is what President Obama is trying to tell us now, then that is to his credit. After the latest tragedies, the country desperately needs to be reassured that what unites is far greater than those things that can tear us apart. But even as we look to the president for the sort of uplifting rhetoric that first brought him to national prominence, we can’t ignore the cognitive dissonance at the heart of what he has said.

If he’s right that we shouldn’t interpret the Dallas shooting as proof that all those who protest against the police support sympathize with individuals who seek to kill whites and police officers, he should take some responsibility for how the false narrative of racism helped divide us in the first place. Doing so should also serve as a reminder that the primary victims of the war on police have been minority communities where crime rates have gone up in response to the inability of cops to do their jobs.

Moreover, though he’s right that we must judge all Americans as individuals and not hold innocents responsible for the crimes of others, his comparison of last week’s violence to shootings by ISIS sympathizers is just as misleading. An armed, concerted international movement that genuinely seeks the destruction of the West–not a generalized perception of racial bias–inspired those attacks. Nor does it help when he responds to these incidents by trotting out his familiar denunciation of guns and promotion of laws that would do nothing to prevent mass shootings. Doing so only feeds the cynicism that continues to eat away at our civic discourse on his watch.

Sensible Americans know that it is possible to be as outraged by unjustified police shootings as they are about attacks on police. But they must also acknowledge that those that have done so much to widen a racial divide are responsible for much harm. We need to hear calming rhetoric from the president now. But he has no standing to lecture us without owning up to his part in the mess in which we find ourselves. 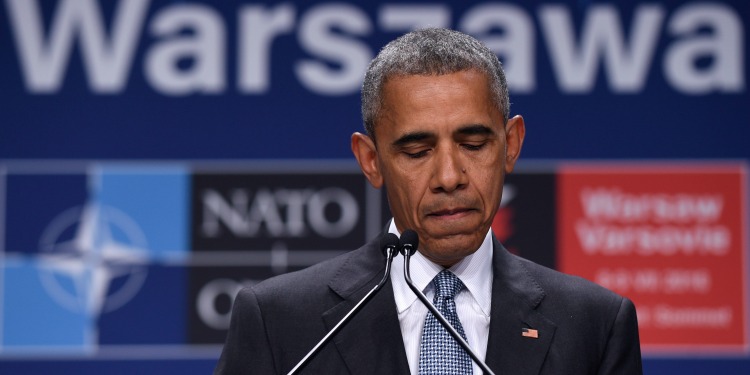