Does it really take 147 FBI agents to find out whether Hillary Clinton and her aides broke the law? The scoop from the Los Angeles Times about the investigation into the former secretary of state’s use of a homebrew server on which she sent and received emails with classified information didn’t give us a timeline as to when this affair will be resolved. But the glacial pace of the probe is apparently picking up.

All those involved have now been told they will be formally interviewed by the FBI. Some experts quoted in the piece say this means the government’s examination of Clinton’s conduct is drawing to a close though given the time needed to conduct the interviews and the fact that supposedly none had yet been scheduled, probably means it won’t be concluded until the summer. But, as the Washington Post’s Chris Cillizza noted, the fact that 147 FBI agents have been rummaging around in the case undermines the Clinton campaign’s claim that the whole affair is something manufactured by the vast right-wing conspiracy that is out to get her. But what ought to be of genuine concern to both the Clinton camp and those who don’t want to see the Democratic frontrunner’s presidential hopes derailed by this case is the dual narrative that the latest stories are promoting.

On the one hand, we are being told that the government is deploying a great deal of resources to look for potential wrongdoing. We are also informed that the government has given immunity to the person that set up Clinton’s server. We’ve also been told that there’s no doubt that the insecure Clinton server was used to inappropriately send and receive classified information — some of which is so secret that it cannot be discussed publicly — and that this is a crime regardless of intent. Nor does such information need to be stamped with a label that says “top secret” like something in an old spy movie. Clinton and her staff would all have known if such information was classified and, therefore, had no business being transmitted on a private system rather than a secure government email and server. All of that would seem to point to serious legal difficulties for Clinton and her aides.

On the other hand, all of these stories keep telling us that it is unlikely that Clinton is in any legal jeopardy. How is that possible given the draconian attitude toward infractions of security law demonstrated in the prosecution of General David Petraeus?

The answer is that we’re supposed to think that what Petraeus did was much worse because he gave information to his biographer and mistress, who did not have clearance to read the material. Yet we also know that what Clinton did exposed secret information on the Internet and to the possibility of being hacked by foreign governments and terrorists. You don’t have to be a Justice Department lawyer to know that sounds pretty bad, too.

What does this all mean?

Taken out of a political context, I don’t think there’s much doubt that anyone who did something as reckless and blatantly illegal as Clinton would have been charged in the case. That’s especially true given the way the Obama administration has strictly enforced national security laws. Nor does it make sense that Clinton’s IT person would have been given immunity to testify if the government didn’t believe that laws were broken by somebody.

Yet every story about Clinton with anonymous government sources as well as a bevy of legal experts willing to supply quotes keeps telling us that she probably isn’t in trouble. How can that be?

The answer is to be found in politics, not law. We can praise the professionalism of the FBI and the apolitical nature of its director James Comey. But there is no way that the Obama administration Department of Justice is going to indict the person who is still almost certain to be the Democratic Party’s presidential candidate.

The dynamic in investigations where this much federal firepower has been used is that if 147 FBI agents are digging into someone’s life, they usually find something that can be construed as a violation of the law. In this case, the violation is obvious. While the laws involving security as applied to the age of the Internet is still evolving, the principles are the same. Despite the assurances that what Petraeus did was worse, handing over physical material to one person who was not authorized to see it but who was not a spy or security risk — as he did — cannot possibly be as dangerous as exposing a vast store of information reaching the secretary of state to hackers via the Internet on an insecure server.

Nevertheless, Federal prosecutors have wide discretion as to whether or not to indict someone for a crime. And if there is a way for the government to avoid taking out Clinton, you can bet that they will take it. Far from the information about the Clinton investigation indicating the seriousness of the government’s purpose, the opposite may be true. As much as the FBI agents working on the case may be doing their best, it won’t be up to them to bring a case that their political overlords want to bury. It’s likely that 147 FBI agents have dug up enough material for an indictment of somebody in the Clinton camp if not the former secretary of state. But the way this case has been slow-walked, it’s more likely that the leaks portend a government decision to buy the affair sometime this summer either just before or just after Clinton becomes the presidential nominee. Any other result seems unthinkable from an administration that is determined to ensure a third consecutive term for the Democrats. 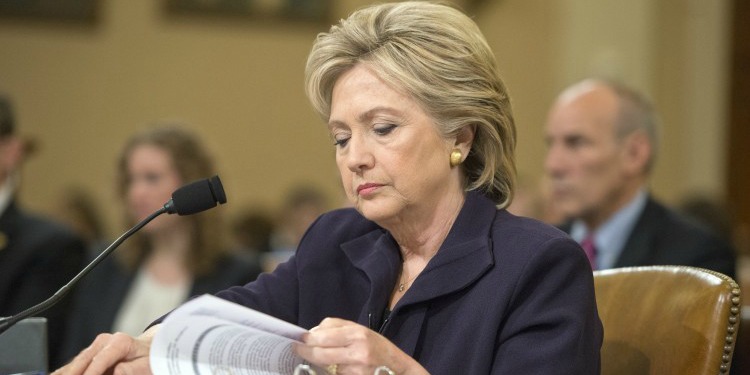